Sports > Football > Steve Smith Makes Sure to Celebrate Before He Fights

Steve Smith Makes Sure to Celebrate Before He Fights 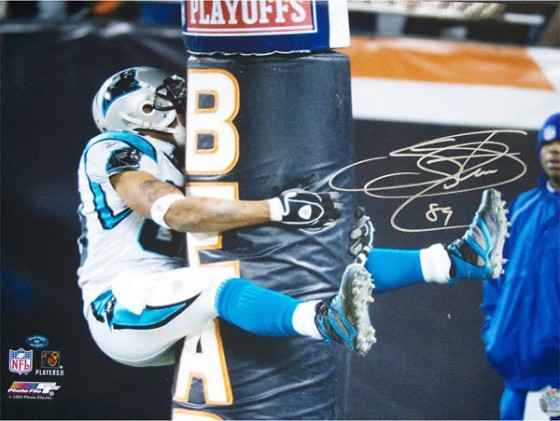 In the Panthers-Saints game, Panthers quarterback Cam Newton made a great throw to Steve Smith, who broke a tackle and scored a 54-yard touchdown. Saints safety Roman Harper didn’t like that, and decided to hit Smith well after he scored. What happened after was fascinating. The video is below, with additional play-by-play.

At 0:11, Harper tackles Smith even though he has clearly scored the touchdown. Smith bounces up quickly, and at 0:13 he starts his touchdown celebration, making it seem like he is unfazed by receiving a late hit.

After Smith finishes dancing and hitting himself in the helmet, he decides at 0:18 to partake in the off-screen brawl that has occurred between his teammates and the Saints. He wrestles safety Malcolm Jenkins to the ground at 0:22 and proceeds to wrench his facemask up while Jenkins flails. Seriously, that must hurt like a BITCH. He only stops after a huge crowd forms and separate the two. Finally, at 0:40 he jogs away back to his sideline. There are some good replays after that, if you’re interested.

The greatest part is when Smith doesn’t initially react to being laid out for no reason. If we went inside the mind of Steve Smith, it would be a scary place with thoughts written out in all caps. Also, he would value dancing before fighting and trying to twist a guy’s head off of his neck.

Remember, this is the same Steve Smith who got suspended for fighting his own teammate at training camp. At least he’s learning to get his priorities straight.

Video via Off the Bench. Photo via.