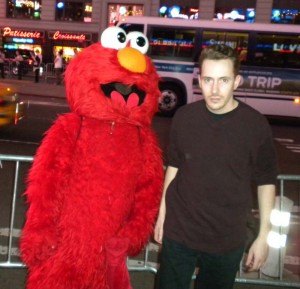 Elmo and Ben in Times Square

As an ignorant tourist walking in Times Square on Saturday, my eyes lit up when I saw Elmo standing on a corner. I rushed over and Gunaxin’s Fred took a photo. Elmo was mumbling something but he had a foreign accent and so naturally I didn’t listen, and walked away after I saw the flash. A moment later, I looked back and saw Elmo looking at me, pointing into a sack he was holding.

He wanted money. I should’ve known.

I knew I didn’t have any singles, and certainly wasn’t going to give him a $10. So I kept walking away.

Elmo started chasing me, and that’s when I had a decision to make.

I’ve got a second degree black belt in tae kwon do. So I could either turn around and kick Elmo in the head, or I could run. There were many people around (mostly tourists and homeless people), so I figured if I gave Elmo a smackdown in front of everyone, police would get involved and Fred and Phil would have to bail me out of jail in time for the Midgets vs. Mascots party on Sunday. I had just a few seconds to make the decision, so I ran. Elmo, clearly pissed off at me, returned to his corner.

Then I saw Spiderman and didn’t make the same mistake.