Humor > Pop Culture > Stop Keeping Your Hands To Yourself

Stop Keeping Your Hands To Yourself 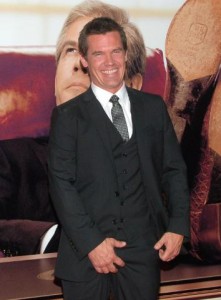 Stop. Look around you. No, not there… over there. See that guy? No, he’s 68 and and thinks he’s a carrot, I’m talking about that kid by the park bench wearing baggy enough shorts to house a small, Third-World family. Yes, now you see him. See what he’s doing with his hands there? It’s okay, no need to blush and turn away, it’s a pretty typical ‘thing’ this kids do now-a-days. Basically, he’s adjusting his package with little or no regard for how much of a complete moron he appears to everyone within viewing distance. 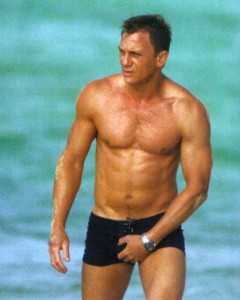 Even James Bond needs to adjust his hidden weaponry.

So, is there a reason for this? Of course there is, stupid! Do you honestly think kids are just snatching fistfuls of their own nuts for the sheer fun of it? Ya know, now that I think about it, I can really see that. Sometimes tugging on the old satchel is a fun and mindless past time… wait, forget I said that. But it seems that it’s also a status symbol of some kind possibly related to the fact that guys, as a whole, really need to prove to other guys their worth and masculinity by illustrating that they do, in fact, have a wickedly perfect set of mating tackle and it’s well worth presenting it via hand massage for all to see. This seems like a reasonable thought to me. Imagine if we had a crown of penises perched atop our heads like a triceratops. Not that the dinosaur had wangs on his skull, but you get the idea. What would you do? Cover them up with a creepy, zippered, Denim hat? Hell no! You’d go around all grabby-grabby and flaunt your crest of wieners to the unsuspecting public like a wreath of Christmas Tree Lights! Well, unsuspecting people who are already awestruck by your frill of dongs, that is. So, it seems reasonable that just showing off could be the reason. But if that were the case, why don’t suited fellas and gents-about-town mince through the streets cupping their boys? Yeah, maybe that’s not it then. 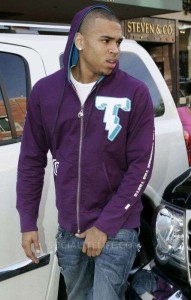 Chris Brown gets in some ‘me’ time.

Perhaps, then, we’re talking about some kind of medical issue. Maybe, and I’m just guessing here, these lads have such an intense itch creeping about their gooch that there is no possible way to hold off until a more opportune time to begin pickin’ and diggin’. I know we’ve all had such diabolical stinging emanating from our grundle and gonads that regardless of the amount of shifting and squirming we do, the only real way to get at that fiery irritation is to grab a hold, and wrench those kids around like a pair of naughty twins. Yeah, I could easily see this as the prime issue of why some dudes need to knead their nads all up in our faces: itching. Full on annoyance and nauseating fire-crotch. But, it still begs the question as to why -what with their four-sizes-too-big shorts- they don’t just get up in there and eliminate the middle-fabric, as it were. Hmm… more studies need to be done here. 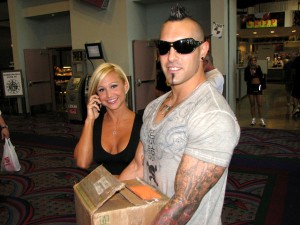 The more I think about it, kids, the more I tend to lean toward the fact that these nasty rascals are just far too paranoid. Seriously, let me explain: Certain guys (and by ‘certain’ I mean urban gentleman and their fat ‘phat’ pants) are so concerned about the locations and relative proximities of their junk to their crotch regions that they have to do a ‘baggage check’ every couple of seconds. Unfortunately, this rummaging of the carry-on can get so out of hand (ha ha) that the man has to literally keep a mitt resting on his package at all times. This is a sad situation. In fact, for some of our ‘gang’ who spend long, intimate hours with their own johnson, it might be high time to seek professional attention. Preferably from people who shy from snuggling their own schlongs. This is, after all, a sickness. You, too, can lend a hand. Wait, I didn’t mean literally! 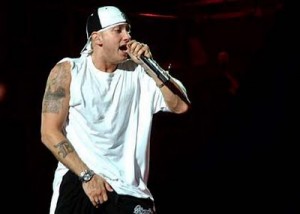