The Story Behind “Cooking Comically”

Cooking Comically is a new cookbook with “Recipes So Easy You’ll Actually Make Them.” It’s a passion project of a guy named Tyler Capps. You may recognize the style if you happen to frequent Reddit, because that is where his idea really took off. Late one night, Tyler took his passion for drawing into the kitchen and cooked up something amazing. His “2AM Chili” recipe was a mix of witty cartoons accompanying photos of his mouthwatering chili. Tyler submitted the photo series to Reddit, and over night his post became a sensation among the popular Internet community forum garnering a top spot on its front page. 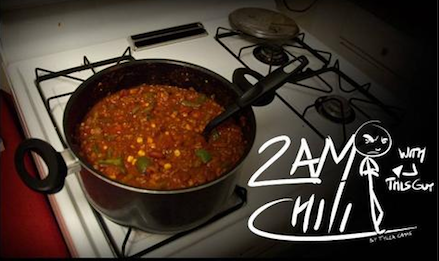 He now has developed the idea into a full cookbook, and is a member of American Express’s Passion Project :

I didn’t start Cooking Comically as a money making venture. I started it because I saw an audience enjoying something that I would’ve done anyway. I do this because I’m passionate about comics and food and combining the two has proven to be one of best things to ever happen to me. Just knowing that there are people reading and enjoying what I do blows my mind every time I think about it. And as it turns out there are certain people and organizations that want to help me make this idea the best it can possibly be. American Express, unbelievably, has turned out to be one of those organizations. They very kindly invited me to be a part of their #PassionProject series and after speaking with the people involved and seeing the others that they had included I was very happy and flattered to be a part of it.

The book is now available for preorder on Amazon, and you can learn more about other Passion Projects on YouTube.