Mars has been the focus of science fiction for over a century. Aliens visiting from the red planet have alternately attempted to destroy the earth or have become our saviors. Sometimes humans visit Mars and are confronted by evil death merchants or by benevolent long-lived intelligence. Occasionally we find ghosts instead. Or Arnold Schwarzenegger. Finding himself. Except it’s not himself. Or is it? Wait..

Now the Curiosity Rover, which isn’t a sci-fi concoction, has taken a photograph which looks an awful lot like a woman standing on a precipice looking out over the landscape. Perhaps she’s wondering what that weird wheeled thing with the headstalk is. Or maybe she’s contemplating the universe and her tiny place in it.

Whatever she’s thinking, a lot of people here on Earth believe that she’s a ghost or apparition and proof that something intelligent lives on our neighboring planet. They’re probably wrong. 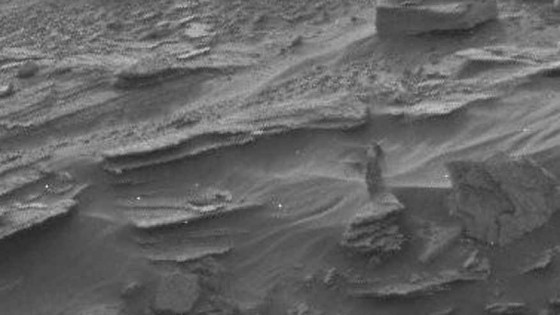 So what is the photo, really? Best guess is that it’s a trick of the light playing on our mind’s exhaustive capability of finding familiar shapes and figures in things. Ever sit in your room when you were a kid, grounded with nowhere to go, and stare at the ceiling, finding faces and Ninja Turtles in the paint patterns? Well, we never grow out of that. It’s kind of built-in.

The other guess is that this is a ghost living on Mars and that the red planet is the actual hell we were warned about and this spirit just somehow manifested just in time to get photographed. It’s also possible that there is, in fact, intelligent life on Mars and, like the Sasquatch, they’re the universe’s champion hide-and-seek players. Or it could go another direction…

Decide for yourself. The original photo can be found on NASA’s Jet Propulsion Laboratory website at this link.