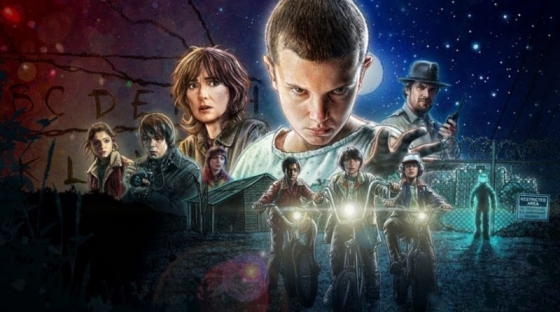 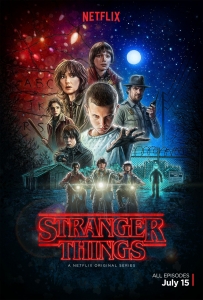 If you have access to social media of any kind, it’s a fair assumption you’ve either heard of or, just as likely seen, the Netflix series Stranger Things by this point. It turns out we here at Gunaxin, bogged down as we are with various forms of media and exciting events, are slightly behind the pack and have literally just finished watching the complete series after a 2-night binge session. And believe us when we say, we now know what all the hubbub is about and feel the need to add in our own two cents.

This is a fascinating series with so much borrowed, homaged, and just plain ripped straight from ’80s and ’90s movie culture that the level of nostalgia was nearly staggering. So let’s take a look… 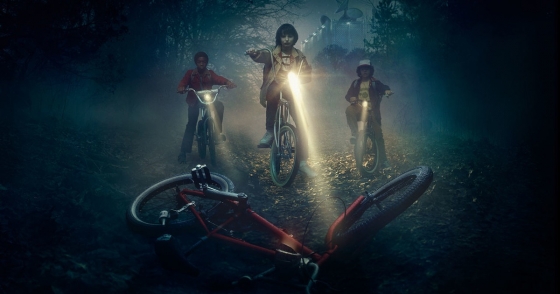 Picture this: Stephen King gets asked to write a script for a TV show, however, he is asked to use all the best parts of his previous works because this new show is going to be very, very special. He agrees, mixes up equal batches of IT, Stand By Me, Fire Starter, and Carrie. He is told that the child protagonist vibe will be very heavy in this series, and if anyone can make kids the main heroes, it’s King.

So now we have the setting, the players, and in some respects, even the plot. But who is going to direct? Why Stephen Spielberg of course. He knows his way around children in movies, too, and is tasked with making Stranger Things feel a little like Goonies meets E.T. meets, well, not one of his per se, but Monster Squad. Spielberg agrees as well since King has provided the crux of the tale anyway. The Stephens toss dialog back and forth, putting in handfuls of their own words while in the background, John Carpenter is working on the soundtrack! Yes, yes he is. Now, are you beginning to understand what kind of amalgamated pool of perfection we’re dealing with here? These three masters of their crafts (plus a few more bits and pieces of others) are truly given deep nods and hearty thanks for the popularity of this show. 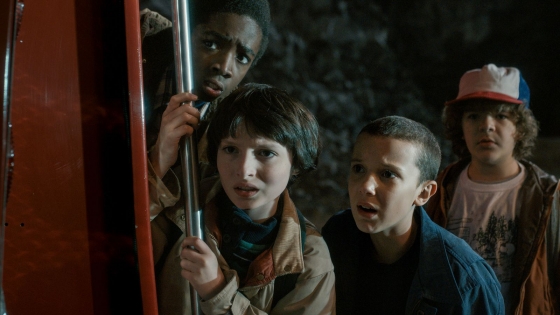 At its heart, Stranger Things is a show about friendship, growing up, and the strength and bonding of children. Yes, there is a dark, secretive government presence in this tiny town of Hawkins, Indiana, but even knowing that (and assuming correctly that their mere presence kicks off the narrative), the show isn’t all about them at all. Think The Goonies and how even though the kids know there is something sinister going on at the Fratelli’s place, it was never about the Fratellis.

It is 1983 and the kids, Will (Noah Schnapp), Mike (Finn Wolfhard), Lucas (Caleb McLaughlin), and Dustin (Gaten Matarazzo) are doing what any kid did back in those days: they are playing a rousing game of Dungeons and Dragons! This is when the nostalgia hits home pretty hard because this writer did the exact same thing. Their game has been going on for ten long hours, but they have yet to complete it by defeating the boss, a Demogorgon, and until they do, Mike argues with his parents that the game just isn’t complete! Sadly, it’s a school night, they are kids, and it’s time to put it away for the night. Will, Lucas, and Dustin leave to head home. But one boy, Will, never makes it. In fact, little did we know at the point, but we have just stumbled into the entire story head first. 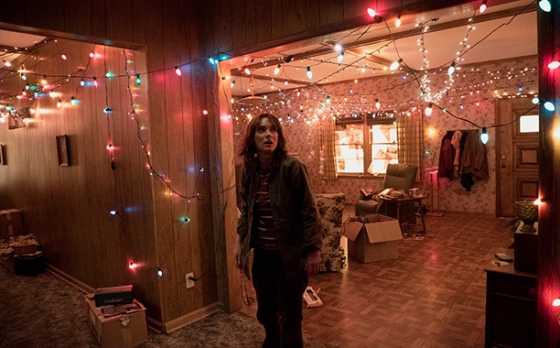 Will’s mom, Joyce (Winona Ryder) discovers the next morning that her oldest son, Jonathan (Charlie Heaton), didn’t see or hear his brother come home the night before, and after a frantic search of the house and a call to Mike’s, she begins to realize slowly that he might be missing. As a viewer, you begin to understand pretty quickly how a mother (or a damn good actress) can nosedive into crazy quite rapidly when a child is missing, and Ryder pulls it off with crystal clarity. She snaps into action and heads to the police station where we meet the Chief of Police, Jim Hopper (David Harbour), a less-than-enthusiastic officer with little more on his plate than family squabbles, loud dogs, and local drunks. He is a character you have read about or seen hundreds of times in any decent King work, and trust me if you are a fan, the likeness is obvious right away. He sees Joyce sitting in his office distraught and pleading for help. Hop is dismissive at first, believing that her son is likely just being a kid and hiding in the woods or something, but Joyce says no, and so begins a partnership that ebbs and flows throughout the series.

Meanwhile, Mike, Lucas, and Dustin haven’t seen Will all day at school, either, and they are getting a bit concerned. They are a very close-knit group of friends: spit shaking, club-rule unbreakable promises, and defending each other to the death, and the loss of their fourth is a significant blow and the worries and concerns start to bubble over. And it’s right about now we begin to understand how the fifth child, called Eleven (Millie Bobby Brown) because of a tattoo on her arm, begins to twist and wind her way into the tale.

After a brief mostly throw-away scene in which she stumbles into a diner, steals food, is subsequently caught and re-fed by the sympathetic cook (who is unceremoniously shot a scene later), Eleven is discovered by Mike on his way home from school. She doesn’t talk much (only a few words), looks like a disheveled orphan, and has the bright-eyed innocent stare of a baby deer. But, as we quickly find out, there is far more to her than we can possibly know and it is this little lost girl who becomes so crucial to the story that it’s as heartbreaking as it is beautifully heroic.

The search for Will Byers becomes a town-wide event. Theories are thrown around, small clues are discovered, and the children take up their own investigation after slowly figuring out who Eleven is and just what she can do (according to Dustin, she has ‘Super powers!’) Hopper stumbles onto something on his own, too, and it just so happens to be the super-secret government facility that has been hanging around in the town right under everyone’s collective noses for at least 15 years. He breaks in, wanders around, and finds the something so hideously disturbing that it immediately piques his curiosity, and also lands him a pistol whip to the skull. He wakes in his own house, dazed but completely clear about his next steps.

Meanwhile, Joyce has fallen further into insanity and has begun communicating with Will through a series of intricately strung Christmas lights, a hastily painted alphabet on the living room wall, and visions of a monster that obviously somehow has her son trapped somewhere… else. Jonathan is sure his mom has lost her marbles and has to deal with funeral planning on his own when Will’s ‘body’ is discovered (terribly, terribly sad, but even we as viewers know it’s not really him) in a shallow reservoir. The town, its inhabitants, the parents of all the kids (save for Dustin’s whom we never meet), are all in an upheaval and that is truly the very tip of the iceberg. 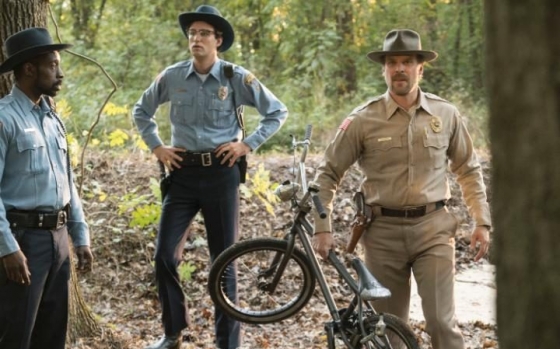 At this point, our write-up here takes you through about the mid-point of episode 5, and from here on out things get wacky. We will do our best not to spoil any of the necessary plot points that must be watched to be understood and believed, but we can’t guarantee it.

Eleven’s powers increase in strength and frequency, but they drain her and she needs to be recharged once the kids can clearly see her nose bleeding. She eats, she learns, and she fights. But, she also knows that searching for Will can only lead the kids to a dangerous place she knows all too well, and she tries desperately to keep them from harm while also assisting as best she can. Hop and Joyce begin to understand that Will is in some kind of alternate dimension that seems to be guarded by something pulled straight out of Silent Hill if it were drug through the brain of John Carpenter (think The Thing but with more mobility and fewer gross limbs), and it is out for and attracted to blood.

Jonathan, meanwhile, has taken up his own hunt for the monster with help from a new friend, Nancy (Mike’s sister- Natalia Dyer), and they, sharing a loss (Nancy’s friend Barb has gone missing, too, though with much less fanfare than Will), choose to fight the thing head on with weapons, fire, and bear traps. Our friendly neighborhood Secret Government installation has their own agenda, of course, and sends a cadre of heavily armed soldiers after Eleven, and, subsequently, the creature. And yes, this is all going on at the same time. It’s perfectly paced, edge-of-your-seat, and as exciting as anything you’re likely to see at the movies this summer. 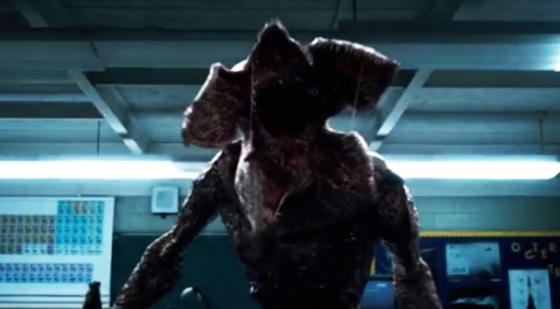 So what happens? We’re not going to tell you. We’ve said enough already. This is a show you are going to want to binge watch as soon as you can. Especially before someone -ya know, like us- spoils it for you. It’s easy to find on Netflix and you will thank us later. But let me leave you with one last thing to keep in mind. Stranger Things doesn’t just leave the door open for a sequel series, it kicks that shit off the hinges. Will there be more? No one knows yet. Should there be more? Maybe, but unless a sequel or continuation is as crisp and well done as this, then maybe not. There are many ways to make this continue, including an anthology where different stories revolve around a common theme. Maybe push it into the ’90s… maybe milk the horror slasher genre a little next time. Who knows? Anyway, you can make your own minds up after you watch. And do watch. Soon.