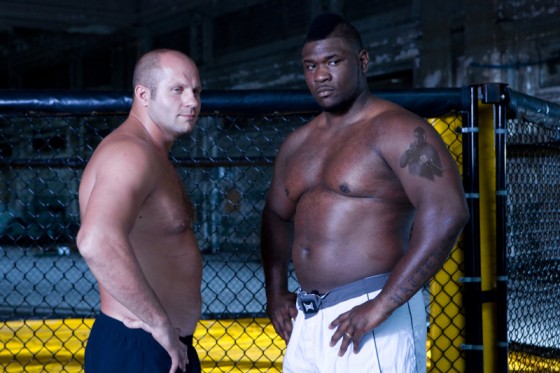 This fight is the first appearance of Fedor Emelianenko in front of a broad US audience. It is televised by CBS on the Showtime channel and it takes place on Nov 7 at 9pm ET with a Fight Camp preview of fighter backgrounds, stories and training footage aired on Showtime Nov 3rd at 9:30pm ET.

Fedor is a heavy favorite of 6 to 1 on average amongst online sports betting companies due to his stellar career and experience. While virtually unknown to an average US citizen, Emelianenko is a big shining star in MMA aficionado circles with a 30-1-0 record, which should be 30-0 IMHO. He lost once early in his career to Tsuyoshi Kosaka due to an unfortunate cut early in the fight, and he annihilated him five years later in a Pride rematch.

Brett Rogers is the past year’s sensation, American-dream-come-true, with a 10-0 MMA record so far and famous for his heavy punch. According to his coach, he has got some new tricks up his sleeve. At +425 for a 100 at this online sportsbook and 30 pounds heavier than Fedor, Rogers does present a certain threat to the undefeated champ if he can break past Fedor’s defense with heavy and fast punches standing up. On the other side of this argument, Fedor is famous for his defense. On the ground, Fedor should be a 100:1 favorite.

Dana White of UFC has been very negatively vocal recently about Fedor not fighting Brock Lesnar with preposterous claims that Fedor is afraid of Brock. What a load of shit. One of possible explanations could be that they don’t agree on the right compensation and this is Dana’s way to provoke Fedor to agree to lower pay. Either way, we’re in for an interesting fight – brutal force vs. experience and patience.