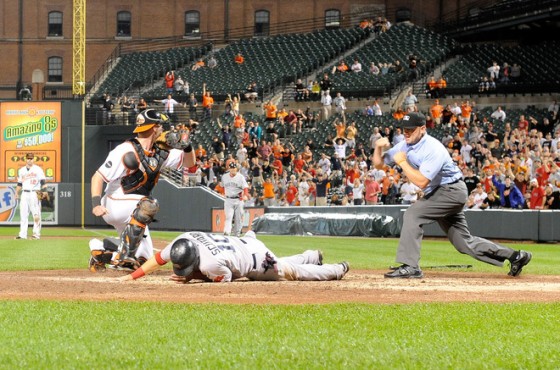 Let me start this off by saying I expect no sympathy for being a Red Sox fan. I know every other baseball fan despises the fanbase and players associated with Boston. The tipping point of hating ALL New England sports when ESPN decided to run that stupid fucking issue of which I refuse to read a page, but we don’t have all day. Let’s just analyze the remarkable collapse of the Red Sox this September as they pissed away a comfy lead for a playoff spot. People love those “World’s Wildest Videos” shows where people crash race cars and huge tankers filled with gasoline explode, so I’m sure a lot of you will savor this.

I can’t really remember when the panic started setting in. It’s kind of a blur. I guess the gigantic losses at home against Texas were kind of disconcerting, but John Lackey and Andrew Miller pitched in those games, so the front of the rotation wasn’t getting lit up. Horrendous showings against the Blue Jays and Rays didn’t help, though. A little after the middle of this month, when the Red Sox lost three of four to the Orioles in Fenway Park, it set in. Shit didn’t just hit the fan; it hit the whole freaking wall. The Red Sox were an airplane sputtering on the few fumes of gas left, and it was going down.

Don’t confuse this though: I had hope. I thought the Red Sox could stabilize themselves before the 162nd game. I had no clue what would happen in the playoffs and didn’t have the highest of hopes, but I just wanted them to get there first. Doing enough to get that wild-card spot was I all I wanted, and I had a little optimism that maybe once that was done, the Red Sox would wipe the slate clean, forget the horrific end to their season and be able to face whoever it was they would play.

Boy, was I fucking wrong.

I watched Game 162 intently on my cousin’s iPad since I was in New York (and I didn’t know that the game was playing on ESPN. Boy am I dumb). We were at someone’s house and left right before they called a rain delay. I also saw that the Rays were losing to the Yankees 7-0, so I thought that there would be less pressure on the Red Sox. I guessed that by the time I got back home, it would all be over, one way or another. It would have been easier to deal with.

Nope! The stress had been extended, perfectly in time for when I got back to a place with an internet connection. Oh, by the way, the Rays had come back from a 7-0 deficit, and they were going into extra innings.

Everything had looked so good this game. Jon Lester only had one mistake, that two-run home run to J.J. Hardy. Whatever, let’s just fast forward to the end of the game, with Papelbon getting the first two outs. I don’t want to talk about Scutaro getting tagged out at home or the bases loaded in the ninth inning or any other of those squandered chances, not only in this game but for the whole season.

After Chris Davis doubled off Papelbon with two outs, it happened. You know that scene in I Love You, Man where Jason Segel gets hit with a golf ball in the knee? It started playing in my head, especially the final part. “THIS IS MY NIGHTMARE!” (NSFW language)

Then the game was tied. It was like another golf ball hit me in the other knee. And then, Robert Andino hit a walk-off single. It was like a third golf ball had hit me right in the mouth. I didn’t even have time to contemplate a Game 163 with the Rays, because I was run over with the damn golf cart when what seemed like seconds later, it was announced that Evan Longoria had hit a walk-off home run.

I didn’t know how to react. At this point, I couldn’t even muster up any anger; I was just sad. The Red Sox had a poor start at the beginning of the season, and a lot of people I knew had ditched them for the playoff-bound Celtics and Bruins (one the BIG reasons why people hate New England fans so much: they shamelessly cycle their teams for whichever one is closest to the playoffs and think nothing of it). I never really cared about the NBA or NHL, but I had watched virtually every Red Sox game I could this season.

I’m not saying I was the lone Red Sox fan still rooting for the forgotten bunch, but I had really loved this team so much. I went to the game against the Yankees in which Josh Beckett had a superb outing and Boston got just their second win in nine games, and I loved every minute of it. I know I won’t get sympathy for being a Red Sox fan, but I bet most of you know the feeling of investing so much time in a team and seeing nothing come of it, especially when it seemed all but certain. It sucks. It sucks so, so much. If your MLB team didn’t get to the playoffs this season, maybe you can look at the Red Sox and say, “Hey, at least we didn’t fail as incompetently when it mattered as the Red Sox.” (By the way, Braves fans, feel free to talk about your equally disgusting implosion. What’s that? You’re alright with not getting attention now? I understand.)

Now that my public moping is done, I’ll watch the MLB playoffs with no rooting interest and involve myself more in the NFL season. For now, though, I’m going to look at a picture of Adrian Gonzalez and cry while this song plays.