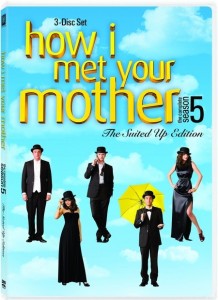 Barney Stinson! That alone should make you want to pick up the fifth season of How I Met Your Mother on DVD September 21st. You have to love Golden Globe and Emmy nominee Neil Patrick Harris’s take on Barney and all of his schemes, catch phrases, and suits that make him a “Legen … wait for it… I hope you are not lactose intolerant because it’s dairy,” or I should I say Barney is a legendary character from one of the funniest sitcoms out there right now.

Season five starts up like any other season with Ted Mosbey (Josh Randor) trying find his soul mate. Lily (Alyson Hannigan) and Marshall (Jason Segel) start talking about having kids once the universe gives them a sign. Ted begins his job as an architecture professor. Barney and Robin (Colbie Smulders) start to become friends with benefits, and Ted looks to buy a house. This season has a bunch of great guest stars like Jennifer Lopez, Chris Elliott, Rachel Bilson, Tim Gunn, Amanda Peet and Judy Greer. The fifth season has 24 episodes which include some of my all time favorites from the show which are “Robin 101,” “Slapsgiving 2: Revenge of the Slap,” “Girls vs. Suits,” “The Wedding Bride” and “Doppelgangers.”

The three-disc set features audio commentary from the cast as well as bloopers, a gag reel, music videos, “The Wedding Bride” trailer and a 100th episode behind the scenes vignette. If you haven’t checked out the show yet then pick up season 5 and you’ll be hooked. It’s available on September 21st and you can pick it up at 20th Century Fox’s website or Amazon.