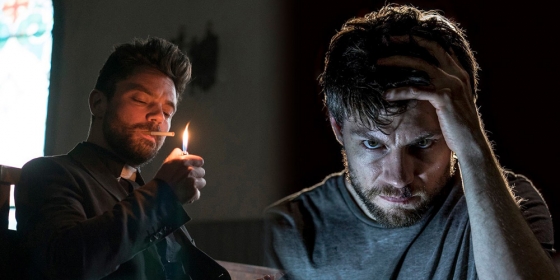 The off-season of television is typically defined as the chunk of time between when regular season shows end (sometime in May), and when they return (The Fall). This large gap of “Nothing New On” could be a great time to find a new hobby, maybe take a trip to Tarantula Ranches with your annoying family, or maybe just venture out-of-doors and start mindlessly flinging your phone at invisible monsters.

Or -and here’s as great idea- why not tune-in to a few of the new shows that begin when the network shit ends! Yeah, you could actually find brand new shows (excellent shows) that don’t run during your precious regular time nonsense that are just as good, if not way better! And let’s just say, for the sake of argument, that you like programs featuring beautifully rendered characters with rich backgrounds and lavish story lines where there might be a whole ton of weird possessions going on. Yeah? You like that? Wait… what? No, no, not possessions like owning stuff. That’s like, Storage Wars or some dumb shit. No I mean possession as in by a thing like a Demon or the spirit baby of the unholy union of Devil and Angel. There, I have your attention now, don’t I? 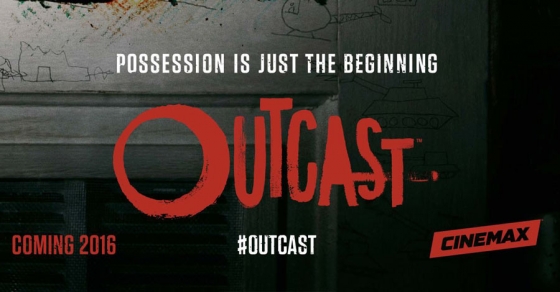 This summer, Cinemax has released a show titled Outcast based on a comic book series by The Walking Dead creator, Robert Kirkman, and it might be one of the most brilliant shows we’re not sure anyone is actually watching. Which is a huge shame because you really ought to be and I mean like right now. Stop reading here, go to your cable box, look up the show and binge the past episodes and report back here in a few hours. I’ll wait. See? Amazing, right? I will now boil it down for you in as simple of terms as possible because there is a whole lot going on here.

First and foremost, this is a Horror series, a fact that is made blatantly obvious from the word go. We see a little boy who looks like he’s just not right somehow, and he seals those suspicions shut the minute he smashes his head onto a bug that’s crawling up his wall and proceeds to eat it. Yup, in all its nasty glory he slurps it right off the wall. And that’s just a taste (ha!) of the problems this kid has. But what could be wrong? Is he sick? Does he have some kind of bizarre disease? Is he filled to the brim with some evil looking black goop that has possessed his very soul and is torturing him from the inside out? Yep. That’s the one. However it is a slow burn and you don’t really know this right away. In fact, this is about the time we get to meet… The Outcast. 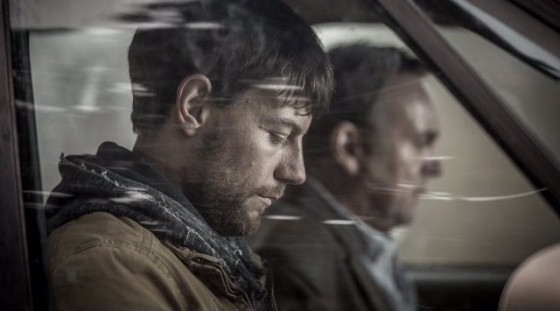 Patrick Fugit plays Kyle Barnes, who, as a child witnessed his own mother fall into the sinister grasp of a demon possession. In flashbacks, she is shown turning from a loving, doting mom into an absolute monster; beating and torturing her son and becoming a shell of her human self. Kyle lives in his and his mother’s former home and has become reclusive and introverted not even wanting to get out of bed. But why? The town seems to know very well about his mother and the history of her downward spiral, but that was years ago.

Kyle seems unable to face the world and we are left wondering why at first. But soon it becomes apparent: his own wife (Kate Lyn Shiel) faced the same fate as his mother, though she is seemingly okay at present, though separated from Kyle with soul parental rights of their daughter (Madeleine McGraw). As it turns out, Kyle has some kind of ability; some kind of talent -and perhaps a possession of his own- where he can remove the black hell from someone imbued with it. However, it can only be done one way. And this is the one way he helped remove it from his own wife: violence. He becomes increasingly agitated and basically beats the devil out of someone. Including a child. 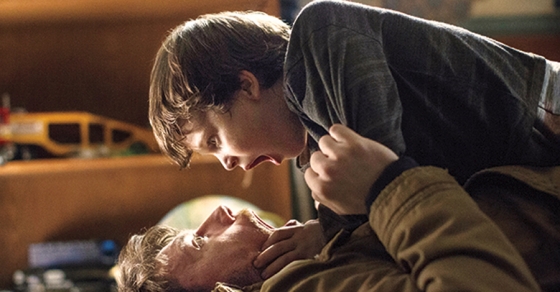 Eventually, religion pokes its head in and the local preacher, Reverend Anderson (Philip Glennister) takes Kyle under his tutelage in order to use his ability to aid in his exorcisms. You see, he is a Christian, but his faith is constantly being yanked by the sudden influx of people becoming something other than themselves. In fact, the entire town seems to be living under some kind of satanic blanket and its effecting everyone in one way or another. So with Kyle’s help, maybe they can rid their town of whatever is slinking about. Unfortunately, Kyle has a history. A sadly violent -yet imperatively necessary- history and not many people trust him. 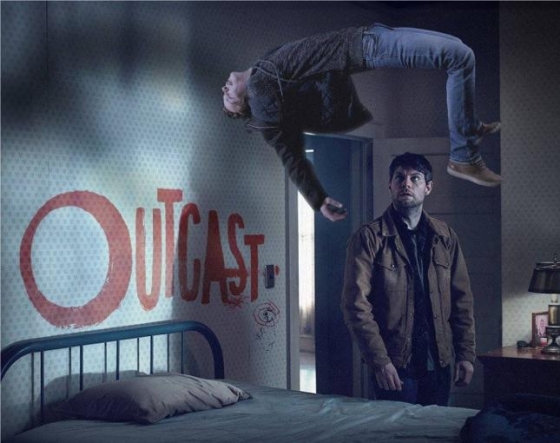 So there you have it: Outcast. My little synopsis does this show very little justice. As I said in the opener, you really need to check this show out right away. 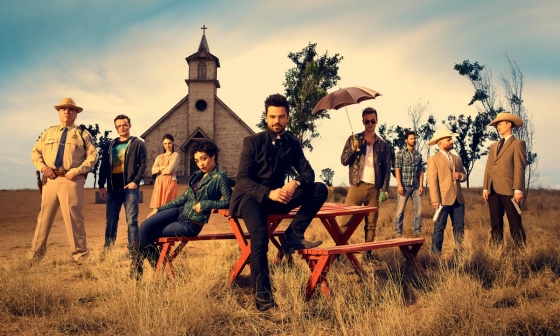 The second show, which though having some of the same themes and also using a man of the cloth as the main protagonist, is a completely separate entity. Preacher, based loosely on the comic series of the same name (we say loosely because this series has almost used the first few episodes as a prequel rather than just following the written narrative, a play we are just fine with since surely some of the viewers are not as familiar with the book as we are), follows the exploits of three “friends” who are each dealing with their own past lives while presently trying to get a handle on the divine power the Man of God seems to be carrying around inside him. 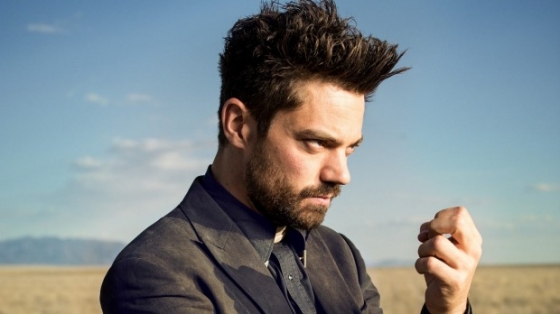 Jesse Custer (Dominic Cooper) plays the titular Preacher. He, too, seems to be struggling with his relationship with God when suddenly he is struck by a spirit (called Genesis) that gives him the ability to change one’s will with just a word. Seems cool, right? Not so fast. Just because it seems right to change people from questionable Christians to ones he deems more the Lord’s flock might not be as altruistic as Custer assumes. In fact, each time something equally as bad balances the good. His friends are a vampire named Cassidy (Joseph Gilgun) and a woman named Tulip (Ruth Negga) with serious anger management issues and a propensity toward violence. Both know Jesse pretty well and both seem to be in his circle of friends for their own benefits, none of which believing he can change the town for the better, magic words or not. 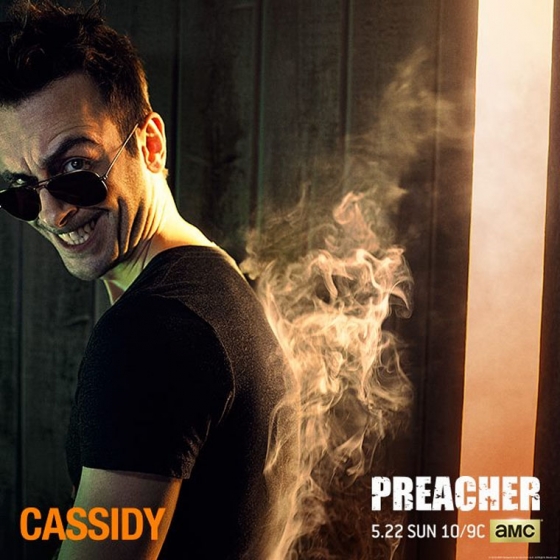 The townspeople are a simple lot; they go about their daily lives, as ass-backward as ever, all except for the one man who actually runs it: Odin Quincannon (Jackie Earl Haley). He is an asshole in every regard and a shrewd businessman if there ever was one. But even the Word can change a man… but definitely not all for the better. Even as these people are transformed, hiding out in the town working tirelessly to recover The Word, are two angels: DeBlanc and Fiore (Anatol Yusef and Tom Brooke) who only want to return the power to its rightful place. This is about the time we find out what this power is (an infant spirit created by the mating of an angel and a demon) and what it can do, and what it shouldn’t be doing, i.e.: hanging out inside Jesse Custer. 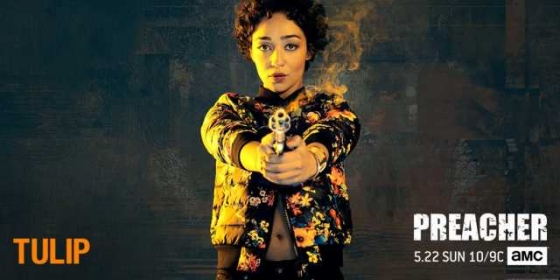 If you’re familiar with the comic book (arguably considered one of the top ten greatest comics of all time) by Steve Dillon and Garth Ennis, you might be taken just a bit aback by the fact that, as we said, the narrative doesn’t precisely follow the ebb and flow. But that’s a good thing, actually. Sometimes seeing a comic transferred word-for-word to the screen can be a little jarring, and might just as easily alienate people who have no idea what they’re getting into other than just being interested in the show. So, show-runners Evan Goldberg and Seth Rogen chose to fill in some of the blanks and answer some of the questions ahead of time consequently making this something of a prequel, and we have to say, though huge fans of the comics, this makes for far easier and even far better viewing. We say get out there and binge this one just as quickly. Go on… get! 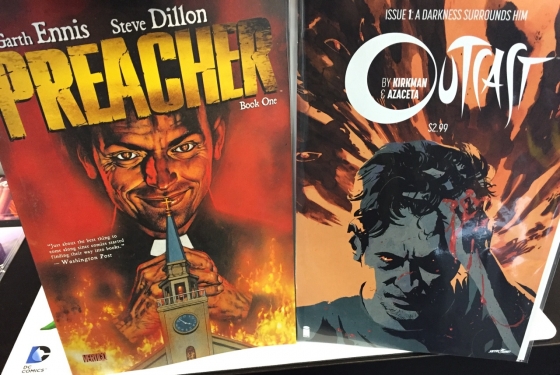 Anyway, that about covers it: two shows riding the backs of the possession/word of God/demons, both of which completely independent of each other yet oddly similar. Both are based off comic books, so if you need your binge fix this summer, you could do way worse than Outcast and Preacher. Happy watching!