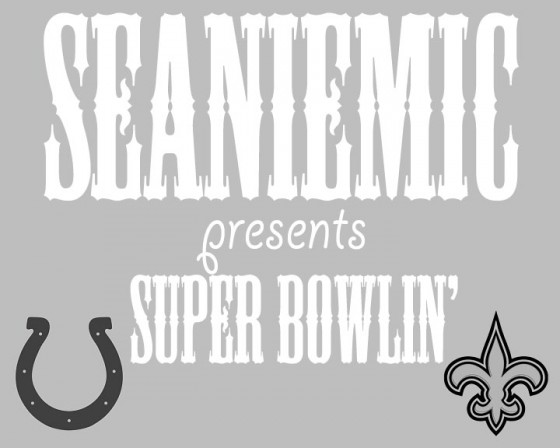 It’s that time of the year again, it’s time for the SUPER BOWL!  The majority of Americans will crowd around a TV, drink excessive amounts of alcohol, and watch the biggest event in sports.  Whether you are a Colts or Saints fan, you will enjoy this new parody rap music video from rapper SeanieMic, set to the Super Mario Bros. theme song.

Are you ready for the big show?
We got the Colts and the Saints if you didn’t know
One citys known for their big ass race track
The other city you get beads if you have a rack
I live in Indy so I ride the bandwagon
We have freezing fog not that I am braggin
The matchup gives reporters a wet dream
Peytons going against his dads old team
A four time MVP cause hes tough
He likes to eat his oreos double stuffed
Is that a supercomputer in his brain?
When he connects spot on with Reggie Wayne
Pardon me do you have any Grey Poupon?
No I don’t but we got Pierre Garcon
Potheads love a super bowl of weed
I think Collie is Peyton’s favorite dog breed
Cause..

Well these Saints are marching in
Reggie Bush screws Kim Kardashian
He’s a playa in life and on the field
Sometimes he thinks the ball has been banana peeled
The commander of their team is Drew Brees
He likes it when ladies show off their TDs
So press your luck Saints but you’ll get a whammy
Your D. End even rapped about Miami?
Enough chatter bout these two squads
Lets talk about what makes this game real odd
Throw down a mil gets you a commercial
Book the Who to keep it less controversial
Drag out the pregame by over 3 hours
I can only take a minute of Cowher
So get drunk it’s a Sunday night party
And see who’s gonna kiss the Lombardi
Word.

Got a D and a picket fence
Yell at the TV and give your two cents
Your lucky hat won’t determine the outcome
Pick a side: Blue Crew or Who Dat Nation
If the Colts win, it’ll be trophy squared
And the Saints will be playing on a prayer
So New Orleans I’m not showing any remorse
Cause your gonna lose as I say GO HORSE!