The humble ghost has kind of fallen out of style. Since Halloween is mostly about getting drunk and/or laid nowadays, putting a poop-stained blanket over your head is more likely to get you kicked square in the nads than help you touch a pair of breasts. 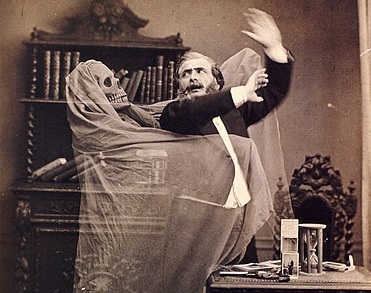 You will feel the wrath of my pimp hand, spectre!

That’s a picture from over a hundred years ago and it’s fake. But come on, how cool is that? They didn’t mess around back then. No unexplained feet in a picture of your grandma checking her weave; when they wanted a ghost on film, they damn well got one. 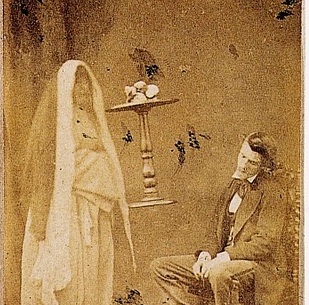 It’s called spirit photography and basically before they had Photoshop people used a number of fancy camera tricks to make it look like ghosts were all up in their grill. Why? For the same reason people do it today: to make money from people stupid enough to believe it, and boy did people believe it. Which is really embarrassing because it means that the people viewing these photos didn’t realize some really obvious things.

1. Cameras back then took minutes to take a single photo.

2. Anyone willing to stand perfectly still while a ghost tried to donkey punch them is kind of stupid and you shouldn’t listen to them.

3. Any ghost stupid enough to stand perfectly still while a man with a camera the size of his head takes its picture is a really shitty ghost.

Then again, people back then weren’t that smart. It’s not like we’d be stupid enough to fall for something like that today. Oh, right.

Is there a way to type sarcastically?