Media > Comics > Why Superman Would Vote for Obama

Why Superman Would Vote for Obama

Superman is, of course, a fictional character. However, in this election season, it’s pretty hard to argue that Superman wouldn’t vote with the Democratic Party. This is the same character willing to destroy a really successful film franchise to address the United Nations about nuclear disarmament in Superman IV: The Quest For Peace. From practically before Superman’s beginnings, Clark Kent was engineered to see the world from a more liberal point of view. As you will see, there is little doubt how he would have cast his vote in 2008 as well as 2012.

Superman Has a Jewish Heritage 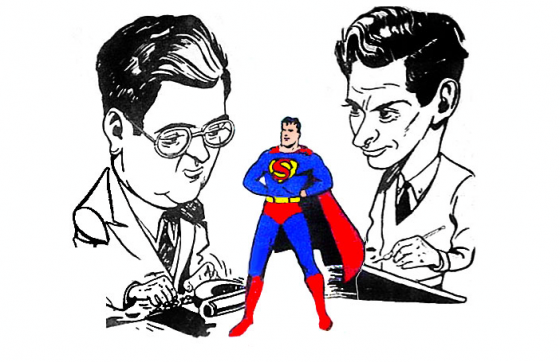 Jerry Siegel and Joe Shuster created Superman. Both Siegel and Shuster were of Jewish heritage. Superman was created during the 1930s. Check out the following statistic: Jews voted an overwhelmingly 90% for Roosevelt. Jewish support of Democrats really started with the Progressive movement in 1916 and voting a majority for Woodrow Wilson. 78% of Jewish voters voted for Barack Obama in 2008. In the particular prism, it's hard to imagine that Superman was thought of by his creators as anything but a New Deal Democrat.

Superman is a Classic Immigrant 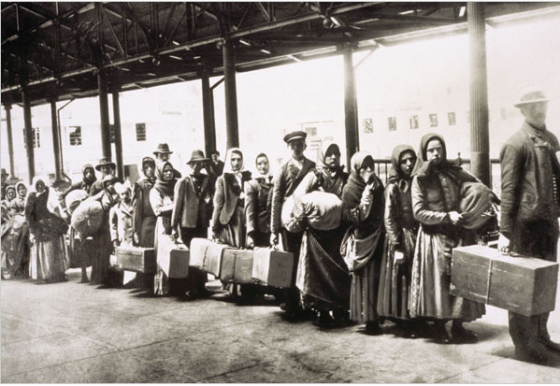 There is not a greater case of an "illegal alien" than Clark Kent/Ka-El. Immigrants overwhelmingly support the Democratic Party. An interesting statistic is that there are only two states that currently require proof of citizenship (other than signing a sworn statement  in order to vote. The two states are the traditionally red Arizona and ironically ... Kansas. Kansas is a recent development. It's widely assumed that Kent is currently a resident of Ohio or Illinois. More likely than not, it's Ohio. Cleveland was Siegel and Shuster's model for Metropolis. Kansas itself has been in the Republican back pocket for the last ten Presidential elections.

However, Kansas voted for Roosevelt twice in the 1930s. From 1932 through 1948, Ohio only went for the Republican party once. Keep in mind that this is the environment into which Superman was born. Throughout the twentieth century, immigrants as well as naturalized citizens have been a solid voting bloc for the Democratic Party. The logic would follow that the Big Blue Boy Scout would not break tradition on this issue. 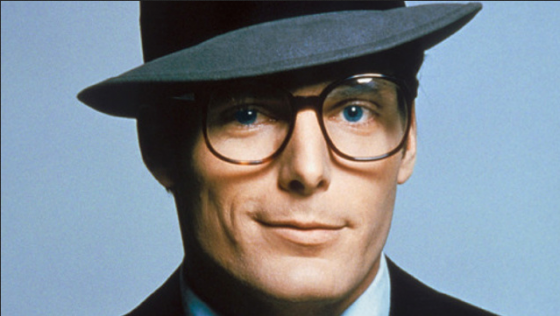 In 1981, there was a book released called The Media Elite: America's New Powerbrokers written by S. Robert Lichter. The book detailed a profile of the average journalist. The book detailed that American journalists were often from upper middle class Caucasian families. The book also found that journalists overwhelmingly considered themselves to be liberal as well as tending to support the Democratic Party. As opposed to Batman (who works out his frustrations by beating the beejeezus out of the poor and mentally unstable), Superman's alter ego Clark Kent is a crusading investigative journalist in a large Midwestern city.

The focus of Superman stories is not even actually crimefighting in most cases. Superman is more of a big picture guy. If Superman sees a mugger robbing an old lady, he will protect her as well as probably turn the mugger in. However, this is not his focus. Superman's enemies are world threatening beings (such as Darkseid) or evil corporate industrialists (such as Lex Luthor). If there was an Occupy Metropolis, Kent and Lois Lane would have probably marched there in their off hours. 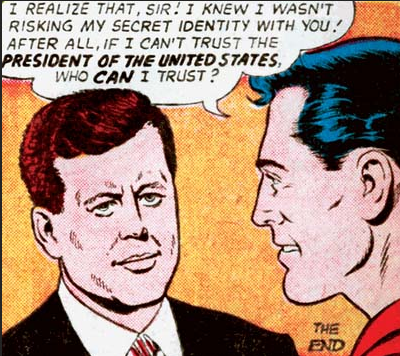 One of the weirdest stories to come out of the Kennedy assassination is DC Comics distress over Action Comics #309. The comic was released one week after the assassination of Kennedy. There was a full distribution and it was too late for DC to recall. In the issue, Superman not only expresses full support for Kennedy's policies but there is also the revelation that Kennedy knew Superman's identity as Clark Kent. In  the vast level of conspiracies about JFK's death, we should really start to look into why Lex Luthor might have wanted a Texan in the White House.

Superman Would Have Voted Mondale 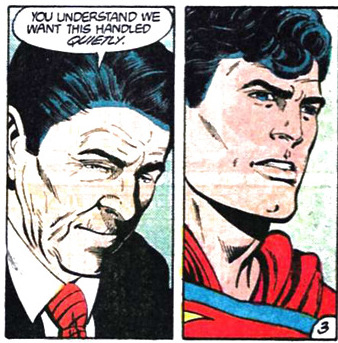 In the 1980s, there were two major confrontations between Superman and President Ronald Reagan. In 1986-1987, there was a limited series as well as crossover event in the DC Universe called Legends. In Legends, Darkseid makes a cosmic wager that he can turn the Earth against superheroes. Reagan himself ends up declaring martial law to protect the Earth against its heroes. Superman barely manages anything above contempt for the idea as well as for Reagan himself. The more famous example is The Dark Knight Returns, in which Superman is portrayed as an angry stooge to Reagan. Superman follows Reagan's directives out of a sense of loyalty (as well as the only way to really continue his super hero activity) , but the relationship is far from warn. In the end, Superman directly confronts a nuclear weapon launched by Reagan's mechanics.