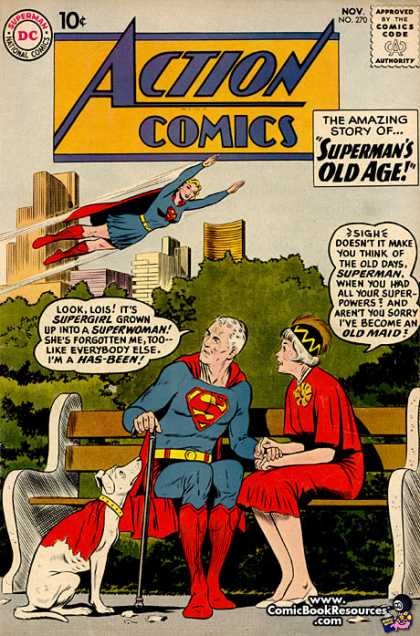 Everyone knows that comics from years ago didn’t exactly hinge on human realism or how the readers might perceive their actions in any given situation. Comics were mostly about telling a story featuring the hero doing heroic stuff regardless of how he spoke, acted, or looked (in some cases). Sure, not a whole lot has changed, but now storytelling has become an art in and of itself and the underlying realism (no matter how far-fetched) seems a bit more science fiction rather than just straight up bullshit. 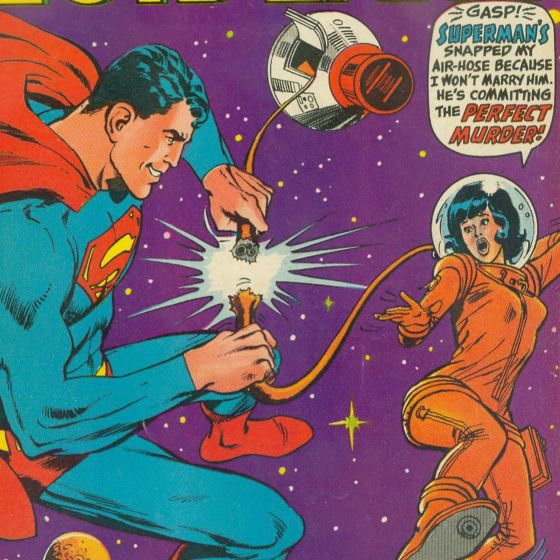 A website dedicated to all of the weird stuff that Superman has done to his friends and family over the years is available at superdickery.com and is worth a read on just the comments alone. The site mostly deals with Superman being a dick to people like Lois Lane and Jimmy Olsen, but sometimes Superman seems to find himself in outright bizarre and completely unbelievable situations typically spelled out in astute perfection right on the cover. So let’s check out a bunch of these, what do ya say? 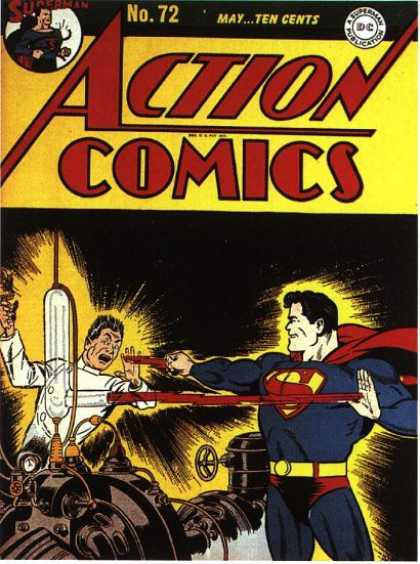 Apparently one of MANY Superman’s powers is to also be a conduit for weird powers shooting from test tubes? His body is absorbing the rays and redirecting them back at the bad guy. This has to be doing some kind of damage to something in his body. Probably his bladder. I hope it’s his bladder. 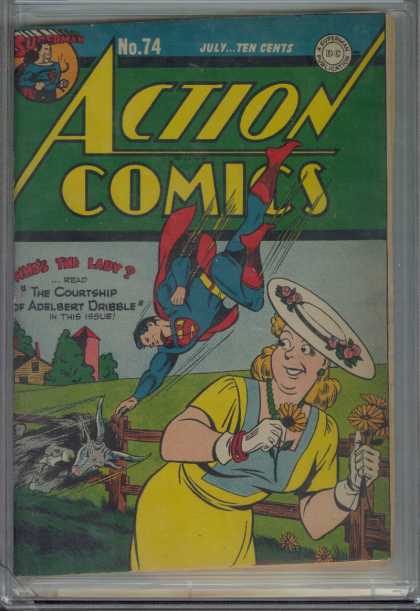 I’m assuming, in this escapade, Superman is attempting to prevent a goat from ramming this chick in the ass. Fair enough, I mean what with all the crimes being stopped and Earth in no peril– it makes perfect sense. But it’s the goat I’m really concerned about. Have you ever seen the horror movie The Church? Look it up. I’ll wait… yeah, I think it’s that guy. 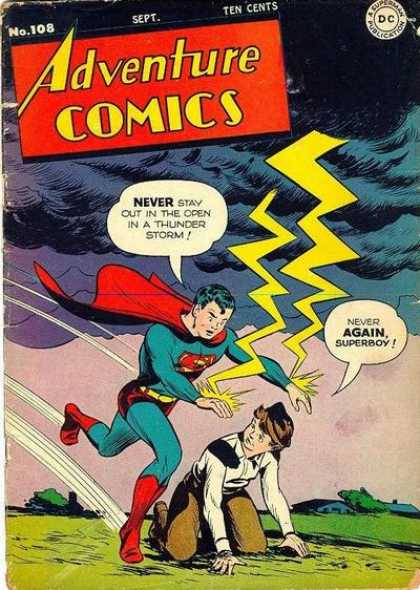 Here we go again with this dude’s amazing electricity-absorbing powers! Safety first, kids. Don’t hang around tending to your dirt while there’s a lightning storm. What are ya, stupid? And just in case comically huge and yellow bolts do happen to fall from the sky, Superboy and his fey little hands of JUSTICE will save the day! 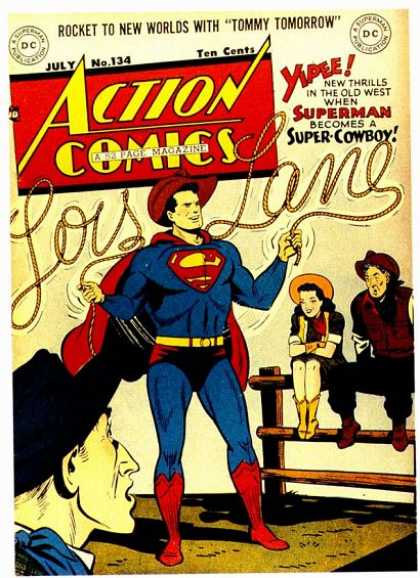 I think Superman has some kind of mental disability. Possibly Bi-Polarism or something. Out of the blue he wants to become Super-Cowboy! Okay, sounds good. And while you’re doing that stupid ass thing, why not show off your super-ability to twirl lassoes into people’s names! They did that a lot on Krypton, evidently. 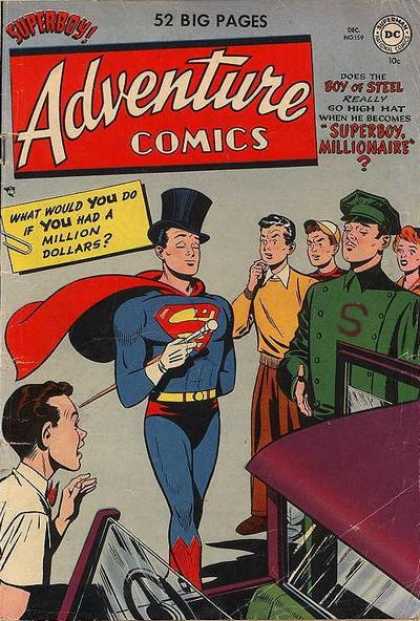 Wow! That’s EXACTLY the first thing I’d do if I got a million dollars! Buy white gloves, a cane, and a top hat! Also I’d walk like a douchebag! Golly gee! 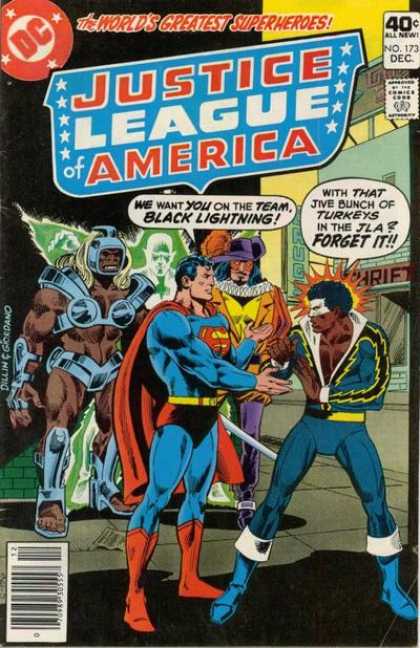 No. Never with THAT Jive bunch of turkeys. Never. 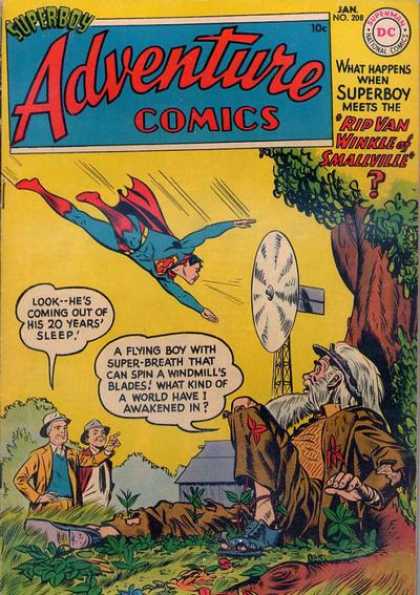 This is what happens when the writers literally came into the office after a weekend bender on opiates and cough syrup. The two old dudes so blasé about the guy who’s been sleeping against a tree for 20 years finally waking up is the best part. Rip’s words are great, since the first thing he notices is his immediate surroundings just happens to feature Superboy doing the most menial of tasks. Wait till he sees Superboy’s reaction to a thunderstorm. 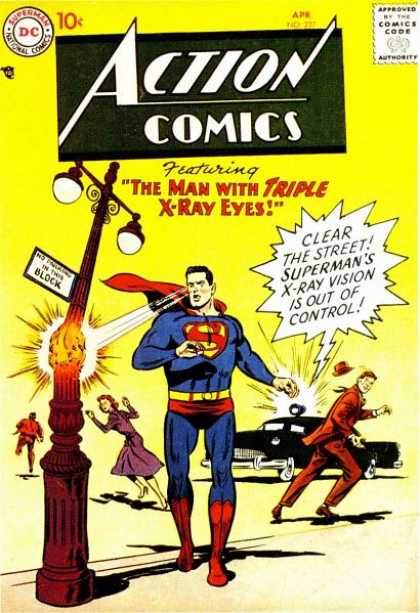 Yes. His X-Ray vision. That can MELT things. That is not what that means. 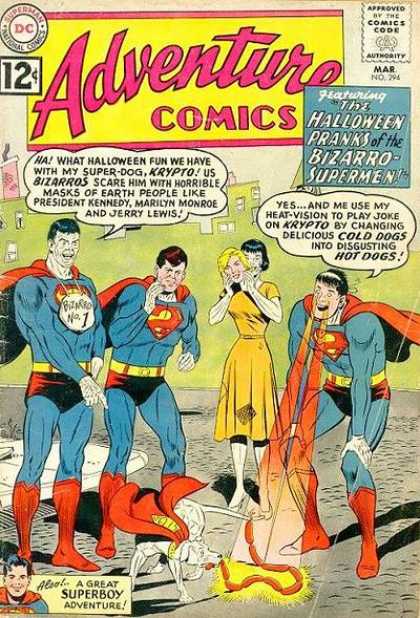 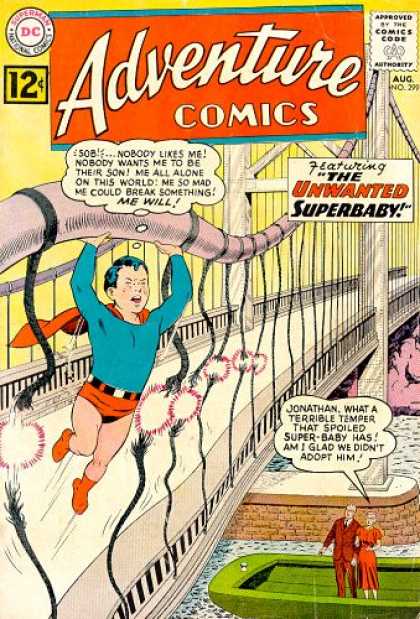 Well, this entire cover is based on convenient contrivances. First off, where’d the boat come from? Is it typical to cruise all gondola-like across the river in Smallville? And apparently seeing a super-baby in costume destroying a bridge is commonplace. And speaking of bridge, Ma and Pa Kent better find an oar pretty quickly… 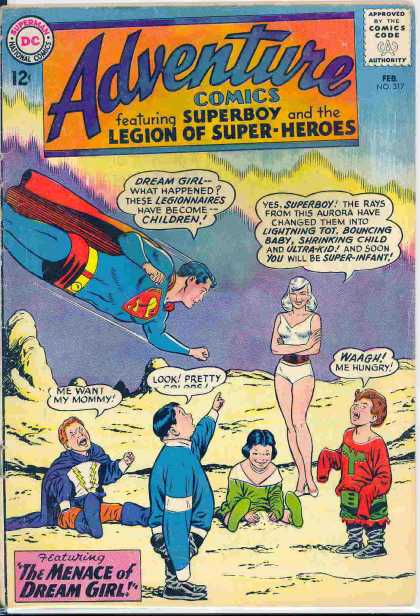 Dream Girl might have been a lame ass character, but she was damn handy at coming up with nicknames on the spot. 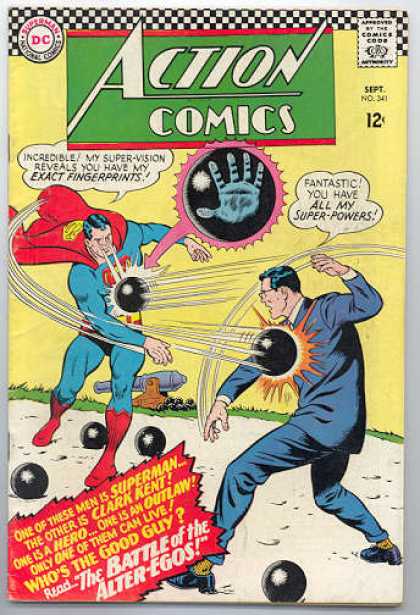 Somehow I can buy Superman’s super-vision going all CSI for him. I’ve seen dumber powers. But what really makes this a classic WTF cover is the fact they’re whipping cannon balls at each other. Of all the things. 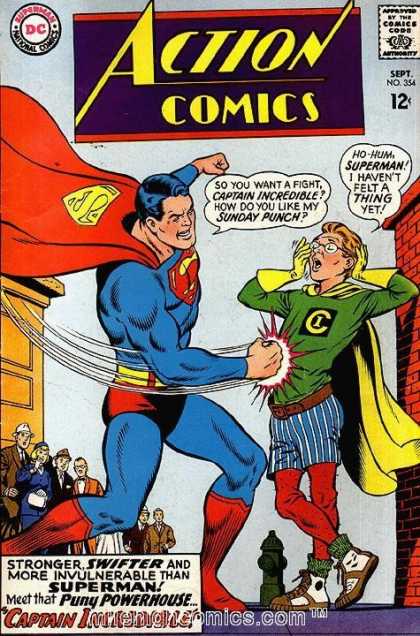 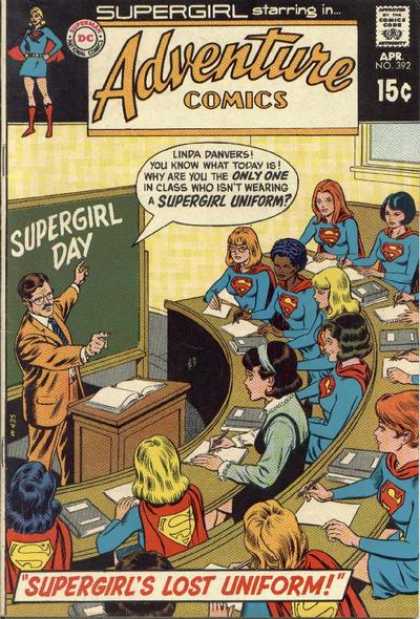 Thank God this doesn’t apply to President’s Day or Dress Like a Fuck-Tard Day. That’s the fifth Sunday in April.