Survey Says: Bush Not the Worst 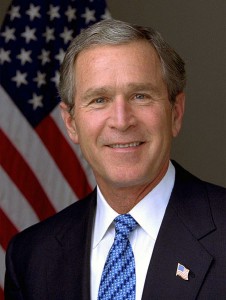 If you ask anyone on the streets of D.C., they’ll tell you that President George W. Bush is the worst in history. And each time I take this survey, I say, “What about James Buchanan? What about Andrew friggin Johnson? Don’t those guys piss you off?”

These people I survey have no answer to that and continue to talk about how awful Bush was.

I’m not here to defend Bush, but in honor of President’s Day I’d like to point out that historians rate Bush as 36th out of 42 men who have been in office. No. 1 overall? Lincoln. Then George Washington, Franklin D. Roosevelt, Theodore Roosevelt and Harry Truman. The worst? James Buchanan, Andrew Johnson, Franklin Pierce, William Henry Harrison and Warren G. Harding.

So, George W. Bush, there’s some vindication. You’re not the worst. And this is coming from historians, not slack-jawed yokels on the streets of D.C.