Media > Comics > Swimming Upstream: A Web Comic For Everyone

Swimming Upstream: A Web Comic For Everyone 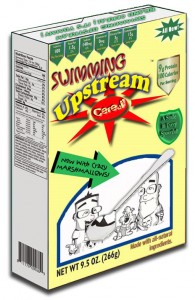 Behind the Web Comics brings you a story of friendship, funnies, and fantasy…

Back on January 8th, a new web comic was born into the already writhing mass of daily-produced web comics that inundate the net. It was a brave first step, it was auspicious undertaking, and it was certainly a difficult task to say the least. The creators behind Swimming Upstream were relatively new to the web comic world, with only a short-lived cartoon under the artist’s belt. They had no preconceived notions of riches and wealth, and they certainly didn’t expect an overwhelming reception, though they were hopeful. No, the idea behind Stew Miller and Doug Waltz’s foray into the too-full web comic pool with a comic about themselves in turn creating a web comic, was just to get in, wade around a bit, and maybe, slowly and with a few inner-tubes, make their way to the deep end.

Issue 10
The comic started out simple. Though Stew is an artist of wide and differentiating talent, his original plan was to just build the comic from illustrated bits and pieces, much like a pre-drawn puzzle. This was a style he’d had much better reception with back in his original comic days, and it did respectively well. Here is an early sample of what the web comic looked like after having been built from previously sketched out designs. From the beginning, Doug was always to have been the writing force behind the comic. His work shows here as well. 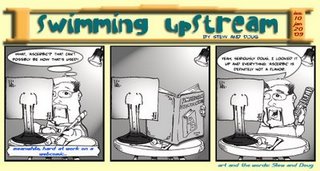 Issue 20
Eventually, a time for change had to come. With Stew’s artwork suffering and the fan-base not increasing much at all, the decision was made to have Stew start hand-drawing each issue from scratch. This marks the first comic of the series where not only were each of the panels drawn individually by hand, but the style and look of the character changed drastically as well. Now, to adapt with the changing times of how web-comics looked in general, Stew and Doug took on whole new appearances. 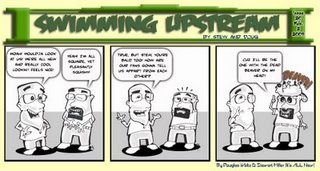 Issue 25
With a minor milestone like Issue 25 in the wings, the guys -being guys- decided to celebrate with the one thing they both really enjoyed: actually attempting to create a web comic while their own wives sought to thwart them at every turn. At this point, a mere five issues after the initial change in character design, Stew went a step further finalizing the way the two of them would look from there on out. 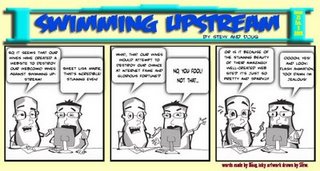 Issue 30
Most experts and professionals in the web-comic field say that, if a comic can make it up to and beyond thirty while maintaining a modicum of readership, the chances of survival increase exponentially. Well, this was Doug and Stew’s real test of fortitude: their 30th strip. With such a zenith climbed, it was high time for the guys to sit back and crack open a six pack, toasting those who kept them afloat in their own ‘stream’. 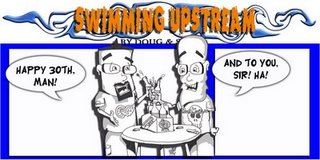 Issue 40
Ten more strips and a few minor adjustments later, comic forty was posted. At this point, specific goals had been set in anticipation and hope that their meager readership would continue to not only hang on for each episode, but also to possibly grow into new readers every week. Prizes for certain story lines were offered, given away, and subsequently lead to an all new crowd of folks enjoying the exploits of a silly, silly comic each day. 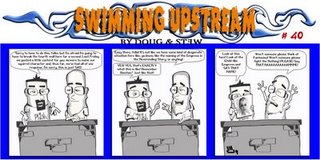 The Valentine Story
As holidays roll around, the fellas try to keep up by turning a regular comic into a relevant strip. In this particular issue, the wonderful lady over at Girls With Slingshots (Danielle Corsetto) was having a contest for one of her characters, Jamie, to go on a date with a reader. So, in hopes of doing so, a funny comic was created and sent along to GWS. Though they didn’t win, Danielle and Jamie herself were impressed none the less. Here’s that comic. 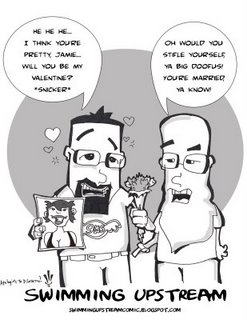 Friday the 13th
Yet another fun ‘Special’ issue featured the guys dressed as though they were at Camp Crystal Lake from Friday the 13th. Both being avid horror fans made for the perfect idea for the unluckiest of days. Of course, Jason had to be here as well, even with his customary weapon of choice. 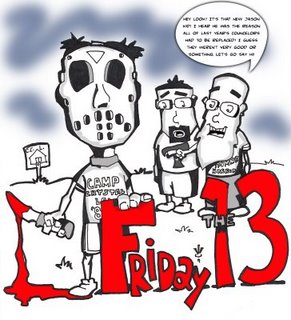 So now, as Doug and Stew move even beyond their sixtieth strip and on into the stratosphere, they constantly strive to better themselves with each strip both in writing and in artwork. Their fan base has grown a little more each day; in fact, rigt along with them… and they wouldn’t have it any other way. Enjoy!