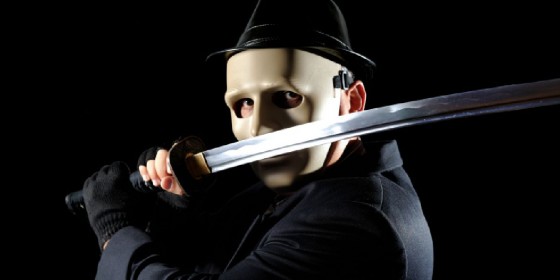 There are a few things a sword-wielding streaker should never say to a bunch of police officers forced to wrangle idiots on New Year’s Day rather than spend time at home with their families. The phrase “you’re going to have to kill me” definitely ranks high on that list.

However, that did not stop 29-year-old Coco Bennett from starting the New Year off by screaming it loud for all to hear while attempting to take on the San Jose police department with a Samurai sword, an assault riffle and his birthday suit.

According to police reports, authorities were dispatched to a local residence where witnesses reported a man armed with an assault rifle was hanging around outside. When police arrived, the man was nowhere to be found. Officers finally located the suspect sitting in his pickup truck in the parking lot of a nearby convenience store. That’s where things took a turn for the weird.

Authorities say the man jumped out of his truck completely naked and began swinging a Samurai sword around like he was swatting at flies, yelling “You’re going to have to kill me” at the top of his lungs. However, police did not oblige the man’s New Year’s execution request and called in the department’s Crisis Intervention Team, instead.

Police say they were able to apprehend Bennett after he attempted to make a run for it and then fell balls first onto the pavement while trying to jump a fence. Bennett was taken to a local hospital where he was treated for minor injuries and a mental breakdown. Drugs and alcohol have not been ruled out. In fact, after hearing this story, we are certain both were involved.