They are calling it “B Movie Mogul” and will launch a website where geeks, nerds and film buffs of all ages can pitch script ideas, titles, monsters and even how characters will perish. Wicked cool! The finished product will be released on the channel as an original film sometime next year.

The proposed website will be in collaboration with IGN.com and will go live Friday. Viewers can then choose from one of three movie plots and vote on their favorite.

Now, you’re probably thinking this will result in a piece of shit movie, but that’s kinda the point. Have you seen some of the recent Syfy offerings? Classics such as Sharktopus and Scream of the Banshee. They’re supposed to be garbage. That’s what makes them watchable.

At any rate, I’m on board this ambitious project. I can’t wait until it comes time to pick a title. I’ve got a beauty that’s a shoe-in to win. I’ll share it with you, but only if you pinkie swear not to steal it. Deal? Okay, here it is: “Giant Possum Vs. Mega Hummingbird.” I even took the liberty to mock up a quick promo poster. 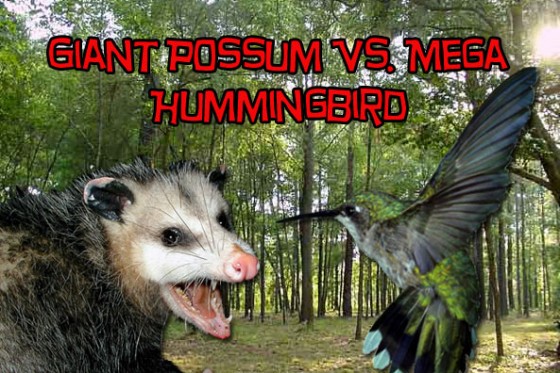