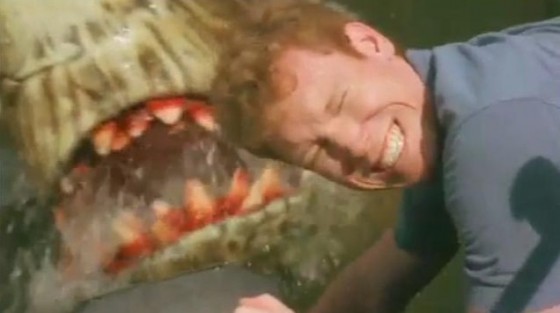 I have zero problem admitting I’m obsessed with Syfy Channel original creature features. Awful movies that know they are awful and make no bones about it should be praised. Especially when there is so much big screen tripe being passed off as legit entertainment.

While I find it a bit odd Syfy released a trailer for a flick not set to air until next summer, it does give me a full year to anticipate the guaranteed greatness of Swamp Shark. I shouldn’t have to extrapolate on the plot because like with most Syfy originals, the title pretty much says it all. However, I will offer three observations worth pointing out before watching:

1. The following line: “This isn’t a normal shark. It swims, it kills, and it’s out there.” Brilliant.

2. The event swamp shark threatens to ruin is called “Gator Fest.”  If that’s an actual festival, I am so there.

3. A chunky Kristy Swanson. Looks like Kristy has been putting away some Swanson dinners as of late. Rimshot!