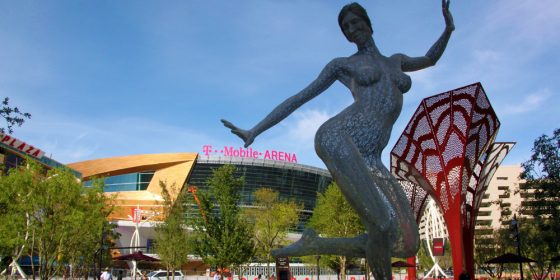 T-Mobile Arena, the largest arena in Las Vegas, is the long-anticipated centerpiece of a new entertainment district on the Vegas Strip. The new 20,000 seat modern arena opened last week and we were there to cover it live on social media. It was designed and built to serve as an entertainment destination in a city that has no shortage of competition in that industry. The arena features a variety of premium amenities, including VIP Suites and an exclusive night life venue, the Hyde Lounge located high above the event floor.

The venue has already been booked for a variety of concerts and sporting events. In the coming months it will host competitions for UFC, WWE, Boxing, and Bull Riding, but the ultimate goal is to land an NHL and NBA franchise for Las Vegas. The arena was designed to realize that dream, and the city is now under serious consideration for a hockey team to potentially begin play as early as next season. We think that is a fabulous idea, and can’t wait to watch our first NHL game at T-Mobile Arena in Las Vegas. 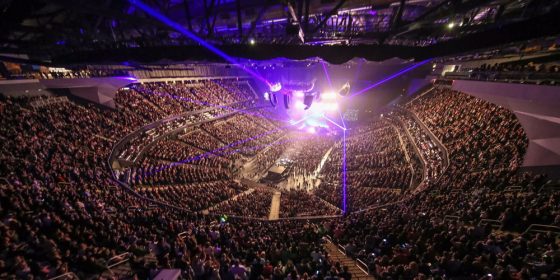 The view from Hyde Lounge

The early schedule is mostly filled with a variety of concerts featuring artists like Guns N’ Roses, George Strait, Billy Joel, Nicky Minaj, and Garth Brooks. For Opening Night though, T-Mobile Arena hosted a local band and their dedicated fans from the surrounding area. Local legends, The Killers and Wayne Newton, headlined the debut show and we thought the choice was absolutely perfect. The Killers were even joined on-stage by Blue Man Group for a truly unique authentic Las Vegas experience 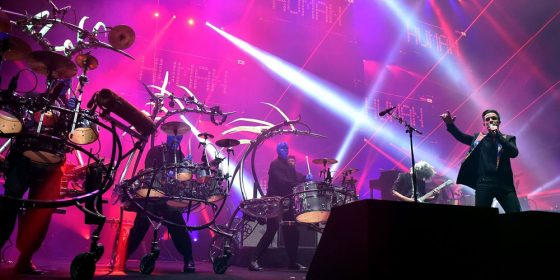 In an epic finale to the opening night concert, Dan Reynolds from Imagine Dragons joined Blue Man Group, Cirque du Soleil, comedian Carrot Top, Wayne Newton, magician Jeff Civillico and others in The Killers’ rendition of “Viva Las Vegas.” It was an amazing spectacle that you absolutely must see on video, so we found a decent YouTube upload (good picture, bad sound) of the most appropriate way we’ve ever seen a concert end. Concert goers were able to easily upload all of their photos and videos to social media thanks to the fast network speeds from T-Mobile and over 550 Wi-Fi access points integrated throughout the arena.

We began our evening in the Grey Goose Loft in the Hyde Lounge, but then ventured to other areas of the arena to check out sight-lines and food offerings. Currently the arena is fairly devoid of color and branding, with the exception of T-Mobile’s signature magenta which dots the mostly grey and black seating bowl. The arena’s signature Pink Highlighter cocktail is served in blinking magenta souvenir cups and as we exited the building onto Toshiba Plaza, magenta fireworks lit up the evening sky with a message of thanks to the people of Las Vegas. It was the perfect ending to a memorable Las Vegas event. 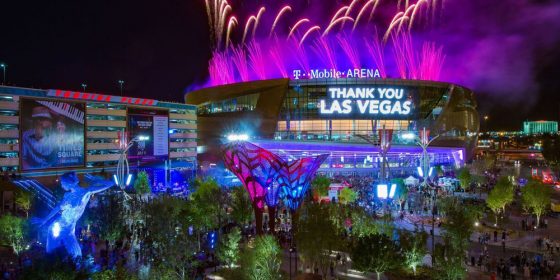 The Park, Toshiba Plaza and T-Mobile Arena at Night

Nearly two years and $375 million of private funding were invested in bringing the world-class arena to Las Vegas. In this age of sports team owners extorting taxpayer funding for new venues, it was refreshing to hear that T-Mobile Arena was privately funded. We were even more impressed to learn that it was designed to achieve the U.S. Green Building Council’s LEED® Gold Certification. In addition the arena is adjacent to Toshiba Plaza, a two-acre outdoor entertainment space that features permanent performance stages and a variety of video screens. T-Mobile Arena truly sets a new standard for what a modern arena can and should be, and we believe it will be the destination of choice for major events for years to come. 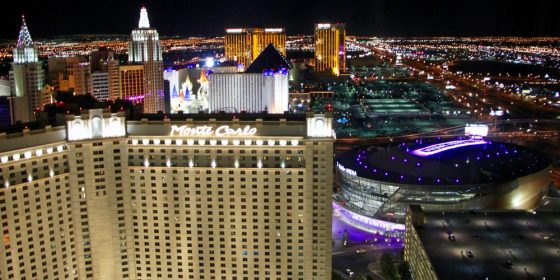 Our view of T-Mobile Arena from our Sky Suite at Aria.