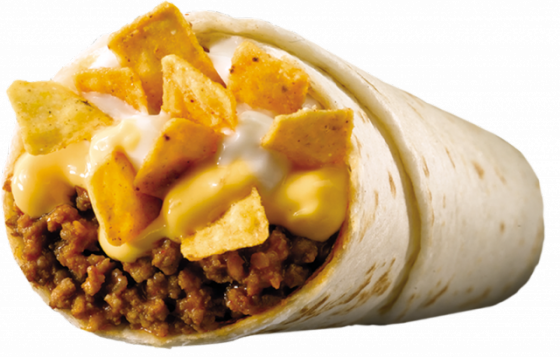 First, let me say that I wish more restaurants would send us press releases, because being sent high-resolution photos of food makes me happy. Although I’ve never been served anything at any restaurant that looked anything like the official photograph. Now onto the big announcement :

On May 23, Taco Bell will launch the Beefy Nacho Burrito for only 99¢, featuring seasoned beef, warm nacho cheese, cool sour cream and our NEW Queso Strips, all wrapped in a warm flour tortilla.  Like a plate of nachos, the Queso-seasoned strips are layered into this 6.7-ounce burrito, giving customers supreme texture while packing flavor to keep every fan’s summer delicious.

Personally I don’t think this is something I would like, but to each his own. It’s only a buck, so you should probably be more open minded than me. I’m more interested in the second part of the announcement though :

The Beefy Nacho Burrito will be available in a $5 Buck Big Hitter Box (Beefy Nacho Burrito, Burrito Supreme, Crunchy Taco and a medium drink), leveraging the brand’s Major League Baseball™ sponsorship. The $5 Buck Big Hitter Box gives fans the opportunity to play an exclusive Home Run Derby™ baseball game built from PlayStation’s popular MLB™ The Show 2012. The game will be available for free via the Taco Bell app for iPhone and Android. But when customers buy and scan the $5 Buck Big Hitter Box using the app, they will get to play as Adrian Gonzalez of the Red Sox. Scanning the cup will also unlock special features. 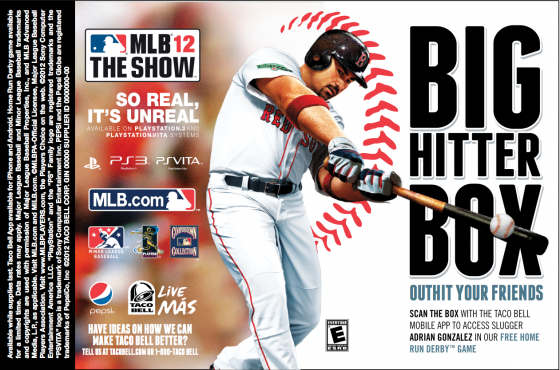 I’m sure this has been in the works for awhile, so they obviously didn’t know that Gonzalez would be hitting .271 with 3 dingers at the moment. I suppose his connection is related to being the cover boy of MLB The Show 2012, and normally a very good ball player. Hopefully he’ll get hot soon, or I think fans would rather use Josh Hamilton in the Home Run Derby game. Still it’s an inventive product integration and promotion that we applaud.