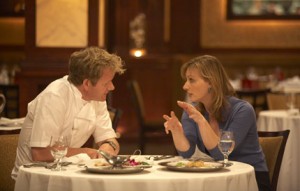 Tanya Steel of Epicurious.com appeared on Hell’s Kitchen tonight, and she looked damn good. So good in fact that I had to look up who this chick was, because honestly I had no clue. They dolled her up nice, and her cleavage was a welcome addition to the Hell’s Kitchen dining room. So to help introduce myself (and you) to Tanya, I looked up a bit of info on the internet:

Tanya Steel is a well-known food writer and Editor-in-Chief of the award-winning food Web site, Epicurious.com. Before joining Epicurious, Steel was the New York Editor of Bon Appetit magazine, where she wrote columns and features. Ms. Steel won the prestigious James Beard Foundation Journalism Award for Magazine Restaurant Review or Critique, 2003. She is a member of the American Society of Magazine Editors and a James Beard Restaurant Judge. Prior to Bon Appétit, she was an editor at Diversion, Food & Wine, and Mademoiselle magazines. In recent years, Steel created the charity program Wine. Dine. Donate. to combat hunger in conjunction with America’s Second Harvest.  Steel is the author of Real Food for Healthy Kids.

Apparently she doesn’t have an FHM spread like Rachel Ray, but I did the best I could to find some photos:

Here is some video from the episode, where you can see what I’m talking about. What did Al Bundy call these again? Snack Trays?

When she first walks in:

Here are some additional clips of Tanya “cooking” with kids: