Updating our 2010 Winter Olympic Ice Hockey Preview, today we examine the Slovakia Federation. No country has been more screwed by the Olympic format that this one. Despite a decent sized contingent of players in the NHL, the formats for the 1998 and 2002 Olympic tournaments effectively prevented Slovakia from icing its best skaters. Not surprisingly their results were less than stellar. I’m not entirely sure who made that decision, but Slovakia was clearly the biggest loser.

Changes were made for 2006 and Slovakia got its revenge. Placed in a six team group for pool play, the country went undefeated, beating heavyweights Russia, the United States, and the eventual gold medalist Sweden. Makes me wonder what Slovakia could have done in ’98 or ’02 if given a fair chance. Unfortunately, the Slovaks lost in the quarterfinals to their arch rival the Czech Republic and officially finished fifth despite a 5-1 record. Please note that this wasn’t an isolated incident of international success. In the last eight years, Slovakia has won three medals at the World Championships including a gold medal in 2002.

The team is currently operated by general manager and former NHL goal scoring champ Peter Bondra with Ján Filc as its head coach.

The Slovaks have always been known for their explosive forwards, but their current nucleus is aging and starting to slip in production. The aforementioned Peter Bondra and Žiggy Pálffy have already retired, and many of the bigger names left are over thirty. That list starts with Marián Hossa, one of the league’s top scorers and current member of the defending champions in Detroit. He’s joined by long-time national teammate Demitra and the young superstar Gáborík. Both are extremely talented, but both have the reputation that they simply cannot remain healthy. If all are able the play, they make a formidable top line.

The other lines should include national team veterans like Šatan and Nagy, plus the young Svatoš. All can provide solid scoring depth and are accomplished NHL scorers to some degree. Handzuš is an ideal defensive forward and can provide leadership. The rest of the forwards all bring various attributes and all have played in the NHL at some point. the biggest question is whether Stümpel will play in the Olympics again given his injury history and age. One name conspicuous by its absence is 2008 World Championship captain Róbert Petrovický. His game doesn’t seem strong enough anymore, but guys like him often can get on a team based on intangibles. Should a spot open up, better candidates would the KHL’s Štefan Ružička or the youngster Richard Panik. 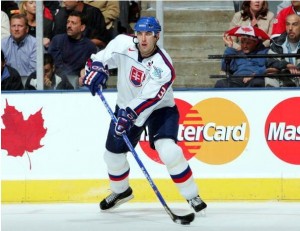 If Slovakia’s forwards are slipping, gains are proportionally be made on the defensive side and in goal. This unit should be the best defensive group Slovakia has ever iced and is anchored by Chára, one the top defensemen in all of hockey. He is complemented by Meszároš and Sekera, two young stars on the blue line. Višňovský is great on the power play, and provides solid overall play. Those four all play vital roles on their respective clubs in the NHL.

After the top four, depth becomes a concern. Jurčina seems like a lock to make the team, but hasn’t developed as hoped. At least he still poses a great shot. Suchý has stated that he’s retired from international play, so there’s a good chance he doesn’t suit up in 2010. Mihálik is a former first round pick developing in the AHL. Should any spot open up, Ivan Barankaor former Florida Panther and current Barys Astana (KHL) member Branislav Mezei are options. All these guys should be NHL caliber players in 2010, but none are difference makers. 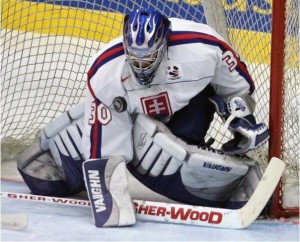 It’s a tale of two tiers on the goaltending front. Halák and Budaj will battle for the starting nod, while Križan and former Nashville Predator Ján Lašák fight for the final spot. Halák is expected to be the starter and remains one of the best young goaltenders in hockey. However, if Budaj ever takes off and runs with the #1 job in Colorado, he’d be a hard choice to pass up. Halák is unlikely to get significant NHL playing time before the Olympics while backing up Carey Price, so the opportunity is there for Budaj. Either way, both goalies are locked in to this team.

For the last spot, I chose Križan in a tight race over Lašák, based on being slightly younger and playing for a top flight Swedish team. Realistically, that last spot could go either way. Križan is the only player on this team without NHL experience.

Outlook: 2006 was the first Olympics the Slovaks were allowed to play their best skaters and they did not disappoint. A repeat performance of going undefeated in pool play seems unlikely given the difference in talent between this team and other countries, but they can’t be counted out. They’ve shown themselves to be a legit threat anytime they’re on the ice. Plus, Slovakia has made great strides in goal and on defense, where it used to have few NHL caliber players. That improvement may not be sexy, but it should help them become a better overall team. Depth remains a concern, and several top players have shown a propensity for getting hurt. Overall they look like a middle of the pack finisher, but with an outside chance at a medal. They can’t be counted out.