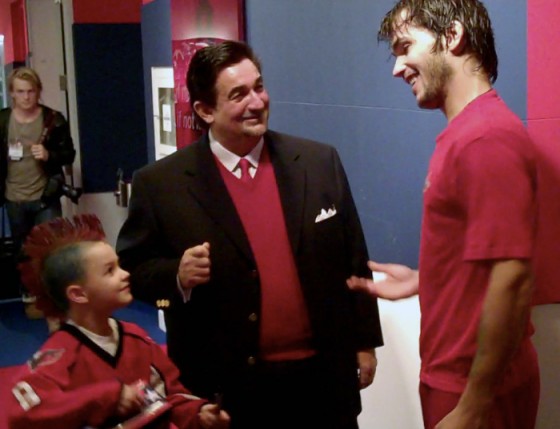 Ted Leonsis, owner of the Washington Capitals, had a special guest in his box this evening, a young boy who plays hockey, and is one of the Capitals biggest fans. However this boy is a bit different from the thousands of other youth players in the area, he can’t eat proteins. His father, Chris Johnson, explained that his son is allergic to 16 different food items, and has to eat through a tube. Ted hosted the family tonight, and brought the youngster down to the locker room to meet some of his heroes after the 7-4 victory. He met Alex Ovechkin, Mike Green, Nicklas Backstrom, Jose Theodore and several other Washington Capitals Players. We shot some video of the exchange (for our brother site, CapitalsOutsider.com), which explains more about this remarkable boy, who scored 4 goals and had 2 assists today.