Humor > Teenager Exposes Self in Yearbook?

Teenager Exposes Self in Yearbook? 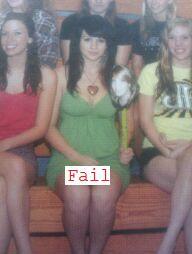 This yearbook Flap, pun intended, concerns a Citrus Park, Florida teenager named Jeanna Jack (here’s her MySpace page) who may have inadvertently exposed herself in a club photo. The unnamed girl explained that she didn’t wear panties the day the photo was taken, because she didn’t want her panty lines to show. Well…mission accomplished: no panty lines showing. Except for the possible side effect of flashing her private parts. Let’s see, why sit in the front row with a short skirt and no panties on? These are the consequences of stupidity.

When the yearbooks were released by Sickles High School, the photo took the school by storm and the teenager became “ridiculously embarrassed.” She has since stopped coming to school and now her mother is demanding that the high school recall, destroy, and reprint its yearbook. I’d agree. She must be so embarrassed. Now the whole school knows she has a vagina. To date, the school has refused claiming the exposure is merely a shadow. Here’s a compromise, I’d let the mom get her way and reprint the yearbook…if she is happy to cover the cost.

If you feel sorry for the girl, understand this: Invizible Touch has revealed that the mother apprarently hosts underage drinking and smoking parties. Not the best role model, and the teenager seems well on her way to starring in a Girls Gone Wild special “Yearbook Edition” video. How long before the books land on eBay? Note to high school girls: wear panties on picture day.

Here’s a link to the scan of the original photo and a new story on the fiasco:

And here’s the Los Angeles Lakers’ reaction to the story: