How Televised Sci-Fi and Fantasy Portrays POWs and MIAs 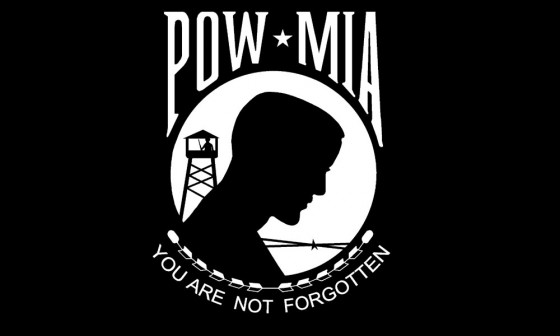 Few topics inspire as much passion as prisoners of war or soldiers missing in action. As we honor our missing and fallen today (National POW/MIA Recognition Day), some times it is impossible to understand their plight. However, the allegories of science fiction and fantasy can sometimes convey emotions that are hard to state in real life. There is so much great entertainment focused on the POW*MIA question. In the 1980s there was an entire action genre focusing on the subject, such as Rambo: First Blood Part II as well as the entire Missing In Action series. In the 1990s, Christopher Walken played a POW that made you never want to wear a gold watch again. In order to get an article to a manageable length, you really have to focus on one component. This year, we are focusing on how science fiction as well as fantasy on television deals with the subject. Read, enjoy, and always remember… 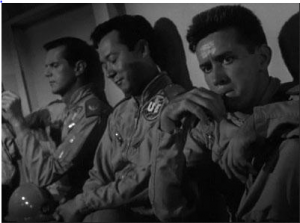 "Nightmare" is one of the true classics of the original run of The Outer Limits. It offers no easy answers as an Earth crew is on its way to the planet Ebon. Earth has been in an apparent war with Ebon since an initial Ebonite attack. The crew is captured and exposed to ruthless physical as well as psychological torture. Let's face it, when you can make tiger-blooded future Apocalypse Now star Martin Sheen scream for his mother, you have an impressive level of Prisoner of War torture. Ultimately, the greatest torture may be knowing that the Ebonites are working with Earth's government to torture its own soldiers. They are in an experiment to find out the limits of humanity. They also want to know why so many failed to resist or escape. This episode is actually inspired by Korean prisoner of war camps -- the same camps that inspired The Manchurian Candidate. 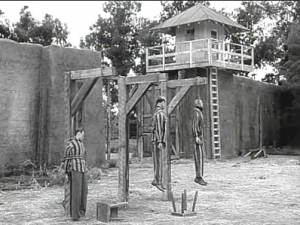 The Twilight Zone weighed in on the horrors of the Holocaust and the prisoners of war within during the Adolph Eichmann trial in Israel. Deaths-Head's Eichmann's character is Gunther Lutze, who wants to take a nostalgic trip through Dachau. Lutze was a guard at Dachau during the war as well as a member of the dreaded SS, and he has no idea that nostalgia has been eagerly awaiting his return. His judgement comes in the form of Alfred Becker, the ghost of a Jew that Lutze killed 17 years prior. Becker is joined by his fellow ghosts of Dachau in a judgement of Lutze. At the end of the episode, Lutze is left a screaming mess. Becker states that his final judgement will "come from God." "Deaths-Head" is one of Rod Serling's best written episodes and serves as a reminder to future generations of the true horrors of war. 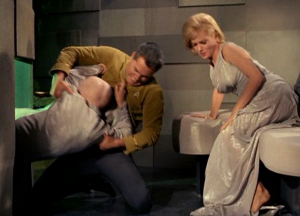 "The Cage" is one of the few episodes of Star Trek to feature former Captain Christopher Pike, who crash landed on the planet of Talos IV. The Talosians are interested in studying human beings. They try to make captivity as pleasing as possible to Captain Pike, using mental tricks as well as different versions of the same woman to entice him. The Talosians learn that humans will fight for freedom no matter how pleasing the captivity may seem at the time. The illusion, torture, and sleep deprivation are all classic examples of what has been done in real POW camps to break the spirits of captives. "The Cage" stands out as one of the most thought-provoking episodes in the original run of  Star Trek. 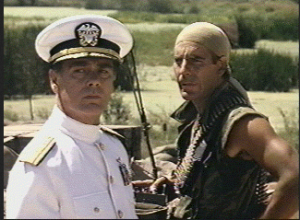 In "The Leap Home Part One," Sam leaped into himself as a young man in Indiana and found no matter what he did, the future would not change. His sister still married an abuser. His Dad still died as a result of lung cancer. His brother still died in Vietnam. In "The Leap Home Part Two," Sam found himself in Vietnam with his brother. Sam leaped into a member of his brother's platoon and discovered that he could save his brother. That save, however, came at a cost: a reporter that did not die originally was killed. Sam also missed an opportunity.  On the day he saved his brother, it is revealed he could have saved his friend Al from years of captivity in a tiger cage.

“The Puppermaster” -Avatar The Last Airbender 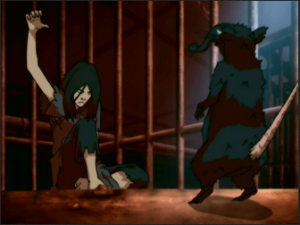 Sometimes, the most searing images can come from some of the most unexpected places. This would be the case with the episode of Avatar: The Last Airbender called "The Puppetmaster." The episodes features a backstory with a woman named Hama, a member of a water tribe who was imprisoned by a Fire Tribe in her youth. The Waterbenders were subjugated into harsh camps. The horror of the camps as well as the fight to survive is demonstrated when the imprisoned water bending tribe learns to bend the blood in rats. The blood bending shows the terrifying lengths prisoners of war have to go to in order to survive. The practice also offers an eerie comment on how the prisoners are forced to subjugate those weaker than themselves. "The Puppermaster" leaves a lot of conflicting unanswered moral questions, but is highly recommended.