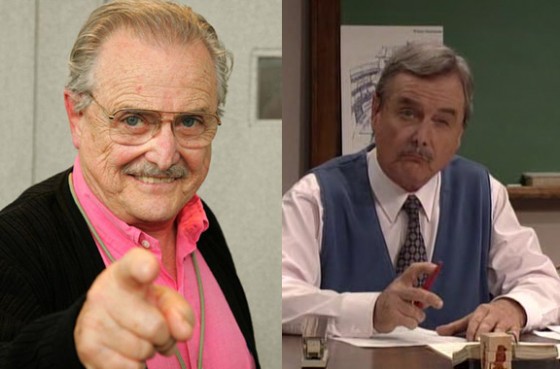 Why is it that every school principal on TV is significantly more awesome than any that exists anywhere in reality? I mean, damn, the fat-ass Mr. Groenling I had in high school lugged around a beer belly, a clip board, and the world’s pissiest attitude! Principals are not, as they are so wont to stupidly proclaim, ‘Princi-PALS’. No one ever befriends a principal for other than nefarious purposes, and no principal I’ve ever known would make time to hang out at a student’s house for any reason. Well, be that as it may, these ten School Leaders are all pretty cool and dudes you’d probably have over to a party. Save the egging and TP’ing for the real things.

With a wink and a nudge-nudge at, of all things, Communism, Principal Dingleman of Weemawee High was a bubbly, smiley, atypical School Patriarch to say the least. But, when you have a far-cuter-than-present Sarah Jessica Parker and ever-cute Jami Gertz within your ranks, it’s hard not to be. Turns out he was a big Ricky Nelson fan, too. Very cool.

9) Father Frank Hargis – Just the Ten of Us

St. Augustine’s Academy is an All-Boys Catholic School. Seems to be the perfect place for a nearly-washed up Coach, right? Well, maybe not so much when your 10-fold family is 99% girls. Couple that with your school’s headmaster being one Father Hargis who can never seem to stay out of your shit, and you’ve got a melange for a damn funny show.

When your Honors Students teacher is thinking a bit too far outside the box rather than letting the braniacs learn more or less on their own, the parents vent their frustrations in your direction, Dr. Samuels. Mr. Moore is far more than a run of the mill professor and it’s up to you to do your best to stifle him a little. Oh, and you’ll fail. Miserably.

In a town where everyone has literally mutated (Hill Valley) thanks to pollution pouring down on them from a far richer and more uppity city called the ‘Hills’, it comes as no surprise that the teaching body of the children’s school is just as twisted and warped. Bob Oblong, father of kids Beth, Milo, Chip and Biff, has no arms or legs -making him look oddly like a CPR dummy- and, strangely enough, is mistaken for one by Principal Davis.

6) Principal Sheppard – Degrassi: The Next Generation

Principal Sheppard aka “The Shep” was the principal of Lakehurst. When Ms. Hatzilakos leaves Degrassi to tend to her sick mother, Principal Sheppard becomes the principal and football coach of Degrassi Community School. Unfortunately, he cares only for the jocks and cheerleaders, and this is made all the more evident by the fact that he does not want Jane Vaughn to play on the football team because she is a girl. Eventually, it’s off to sensitivity training for this jackass.

A skinflint, rap-loving, easily-blackmailed principal of a school with a pretty fantastic Glee club. Here’s one of his more famous quotes: Figgins: “Your kids can only perform these pre-approved musical selections.”

Will: “But all these songs have either Jesus or balloons in the title.”

Figgins: “But there are also songs about the circus!”

The curmudgeonly vice-principal (and later principal) of Buchanan High. He makes no secret of his disdain for the ‘Sweathogs’, whom he considers the bottom of the barrel at the school. He refers to non-‘Sweathogs’ as “real” students. When Kotter was a student at Buchanan, Woodman taught Social Studies, the same class Kotter returns to Buchanan to teach. His old age (and sometimes his lack of height) are common jokes with the ‘Sweathogs’.

Wikipedia says: “Originally, Mr. Feeny tried to keep a traditional teacher-student relationship with the other characters. This proved impossible, and in the series finale, Shawn says, “Oh, you know we’re your favorites.” Cory then adds, “C’mon Feeny. You haven’t even spoken to another student in seven years!” At this final moment in the show, it is revealed that Mr. Feeny’s care for Cory, Shawn, Topanga, and Eric in the last seven years is what the quotes, lessons, and devotion toward others in the show revolve around.” Also he was the voice of KITT! YES!

Rather than write anything you don’t already know, I’ll direct you to one of GUNAXIN’s own articles on this fella: Ten Creepy Old Guys Who Got a Pass.

Quite possibly the epitome of Television school principals. Skinner has been the shit-on target of Springfield Elementary for as long as the series has been on the air. Though primarily soft, weak, and open to just about any ploy that will save the rapidly sinking school money, Skinner is also a kind guy at heart often looking to Bart or Lisa for help just as he attempts to avoid another of the Simpson boy’s practical jokes. Supported by Grounds Keeper Willie and Superintendent Chalmers, Skinner quietly defends the only job he’s ever known.