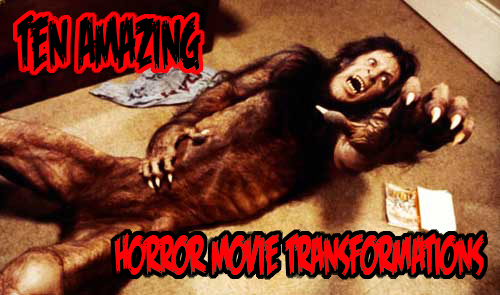 Let’s pretend — just for a second — CGI didn’t take over filmmaking and render the final products to look like really shitty video games. James Cameron, take note: just because you can convert every possible movie you touch into a slice of computer rendered vomit, doesn’t mean you should. Avatar was an unadulterated, overrated mess and were it not for your pandering to the lowest common denominator of movie goers, you’d never have made your billions of dollars to put toward your next cinematic abortion. Man, I used to have respect for you.

Now, let’s go back a decade, or two, back to the days when it meant something to be an FX genius, and not just a guy in a room full of computer screens and keyboards. I’m talking when it took countless hours and days just to get someone’s head to look just right as it exploded into a mass of flying funk… in one take. Horror movies used to rely on long shots of characters you actually gave a shit about slowly succumbing to the evil that was tearing away at their physical beings like a rabid dog. Horror movies used to keep us up at night wondering if the full moon could turn us into a mindless creature of the night as well.

Sadly, as times changed so did people’s perceptions of what scared them and everyone turned to computer generated jump-scares, and failure crept ever closer. But let’s not talk about that. Let’s relive the glory days of great horror when the transformation scenes alone were worth the price of admission. Here are ten of those wonderful changes.

When a bizarre alien plague begins its methodical decimation of Earth, it only stands to reason that the first person you’d want to infect to carry out your nefarious plan would be Michael Rooker. Rooker plays town tycoon Grant Grant, who is a bit of a shithead anyway. But when he’s bitten by a mysterious slug-like thing, it just compounds his anger… not to mention his strength, speed, and over-all creepy-looking appearance. Throughout this 2006 masterpiece by James Gunn — beautifully honoring B-Movies — Rooker slowly transforms into something out of Clive Barker’s closet. The scene I found is about the best representation YouTube had. You get the idea though. I highly recommend checking it out.

As far as movies starring horror shock-rocker Alice Cooper go, this is the only one (until recently). Strangely, Cooper only managed to step in front of the camera for one movie and, sadly, this is it. It was filmed in Spain in 1984, which is pretty obvious from the horrible dubbing and shitty acting respectively, and Cooper just seemed kind of uncomfortable throughout. Until this specific scene where the curse of his bloodline finally reveals itself and he begins turning into… I guess it’s a werewolf/demon dog thing. It’s kinda hard to tell largely due to the fact that he looks more like an amorphous blob with a face. Oh well, it’s still a pretty decent transformation.

Ya know the part of this classic song and video that used to scare me the most? No, not the hideous dancers or even Michael Jackson himself, but rather Vincent Price’s dialogue and maniacal laughter. Gave me the fuckin’ chills. Anyway, everyone knows about this amazing video directed by horror geniuses John Landis and Rick Baker, who also assisted on the make-up effects. Make-up effects which, by the way, turn MJ into what I just discovered is a werecat. Yeah, just really makes the whole thing a bunch less scary now, doesn’t it? Anyway, Jackson’s transformation-come-dance off is really what makes this video as popular as it has become, for sure. It could easily have been done without the benefit of corpses… but no. To me, they’re the whole reason for this thing to exist. That and ex-Playmate Ola Ray portraying Jackson’s “love interest.” Right.

Largely considered to be one of the goriest horror flicks ever made, Dead Alive (or Braindead) is what Peter Jackson gave the world before he directed a trilogy of walking and a movie with an ice-skating ape. This film is what all aspiring horror moviemakers ought to hold as their Holy Grail. It’s a sweet story that follows a fella (Lionel Cosgrove) and his domineering mother as she slowly turns into a zombie as a result of a Sumatran Rat-Monkey bite. Lionel loves his mum, but all the animal tranqs in the world aren’t going to stop her from slowly turning the town into more zombies as she ravenously bites them one by one. Her ultimate transformation into a gigantic beast with disgusting intentions is well worth the build-up.

Only cinematic magic can come from combining David Cronenberg with Jeff Goldblum and Geena Davis. And it did, and they called it The Fly. And it was good. You just knew from the moment Seth Brundel stepped into the matter transfer device with an innocuous fly buzzing around, that the only result was going to be trouble. Oh sure, the agonizingly paced turn into part insect seemed literally painful, but it was all worth it in the end, when just before that fateful scene when suicide becomes the only option, you see the complete Brundle-Fly. An amazing achievement in filmmaking, The Fly is a remake light years better than the original.

Michael J. Fox owned the ’80s. From the Back to the Future trilogy, to Family Ties, to Teen Wolf, the decade was all his. Sure, we all love the Back to the Future movies the best, without argument, but it’s hard to deny the genius that was Teen Wolf. Sure, it wasn’t the most solid story around, but for what it lacked in basic plot, it more than made up for in amazing effects. Especially the transformation scene in the bathroom when Scott realizes his family lineage and the fact that his dad is also a little hairy.

If I could recommend watching one thing, aside from Carpenter’s classic The Thing, it would have to be the extra documentary that comes with the movie itself. Not only have they gathered many of the actors from the film, but they’ve also gotten interviews with the crew including Rob Bottin, the master behind the creature effects. Rob is an absolute genius and a veritable joy to listen to as he goes into detail about all the effects-laden scenes in the movie, how he and his companions pulled them off, and the assistance from Rick Baker for a key moment as well. It’s one of the best documentaries I’ve ever seen. Anyway, for those unfamiliar, the Thing is a kind of alien that can take the form of anything it touches. Unfortunately to do so, it basically rips its victims to shreds and leaves bits of itself all over the place. Its transformations aren’t fully as one person or being, they’re of many, and it truly is a wonder.

When it comes to 1985 and Italian Horror, two of the greatest names are certainly Bava and Argento. Well, this duo combined forces to create one of the most classic horror flicks of all time: Demons. The story is simple, but very effective. A huge group of movie patrons has gathered to watch a film, when suddenly a woman who has just inadvertently scratched herself on a mysterious mask begins to transform into a monstrous demon. Just watch and see.

Hey, guess what? It’s Rob Bottin again! Only this film came out a few years before The Thing and was definitely one of his best movies. In fact, though the next movie was released first, this movie was made first and shows one of the finest attempts to make a man convert into full werewolf in one long shot. Bottin made damn sure to use as much as he could to make the audience believe that Eddie Quist — with air bladders and functioning mask-work — was actually becoming a werewolf. The original effects artist was none other than Rick Baker, but he was called away to work on an even more impressive transformation scene, which happens to be our number one.

An American Werewolf in London

Boy, it sure seems like a bunch of these films are intertwined, and I don’t just mean because fifty percent of them are about lycanthropes. Guess who directed An American Werewolf in London? If you said John Landis, that crazy cat who made zombies dance in “Thriller,” and Rick Baker, you’d be right! The movie stars David Naughton and Griffin Dunne as David and Jack, a hapless duo prowling the Moors, despite warnings to do just the opposite. They are subsequently attacked by a beast and while Jack is savagely mauled and killed, David survives and begins his painful descent into madness as he fights both the beast and denial — Jack knows better — as he turns into a wolf during the full moon and a killing spree ensues. For my money, this is without a doubt the single greatest transformation scene in movie history. In one shot, we see David become the monster without CGI. Amazing.