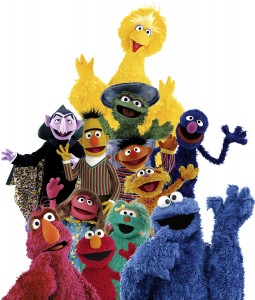 In our last post about the unadulterated genius of Jim Henson and his two most well known and beloved Television shows, we had 10 amazing performances by musicians on The Muppet Show. Sesame Street had its fair share of special guests as well. Often the singer or performer would just appear in one segment and belt out a tune, or even have a cute little duet with one of the puppet cast members. So, a bit unlike the Muppets list, this one has a few more recent spots (namely the first two from the nineties), but the majority still come from the far more classic and original shows from back in the seventies and eighties. Since I posted a bit of background from Wikipedia on the last one, I figured why not lay out a bit of trivia this time to stump your Muppet-loving friends at parties.

Rumor: (From Wikipedia) :”It has widely been suggested that Bert and Ernie are a gay couple, as they are apparently adult human males portrayed sharing a bedroom, though with separate beds. A 1980 collection of humorous essays by Kurt Andersen, titled The Real Thing, made light of the growing rumor. “Bert and Ernie conduct themselves in the same loving, discreet way that millions of gay men, women and hand puppets do. They do their jobs well and live a splendidly settled life together in an impeccably decorated cabinet.” Incidentally, they are not.

Rumor: (From Wikipedia) :”In 1990, puppeteer Jim Henson’s death spurred rumors that Ernie would be “killed off” in the show, much the way the character of Mr. Hooper was after actor Will Lee’s passing some years earlier. Rumor said that he would be either killed by a vehicle, AIDS, or cancer. There was no legitimacy to this rumor, but because producers took their time recasting a puppeteer for Ernie, the delay allowed the claims to burgeon. A spokesperson for the series was quoted as saying “Ernie is not dying of AIDS, Ernie is not dying of leukemia. Ernie is a puppet.”

Truth: (From Wikipedia) :”In 2002, Sesame Workshop announced that a character with HIV would be introduced to Takalani Sesame, the South African version of the show. Many groups wrongly presumed that the American version would be getting a “gay Muppet.” This concern came about presumably because of a perceived connection between homosexuality and HIV in the United States, but the character with HIV is only present on this international version of the show. The character, Kami, contracted HIV from a blood transfusion as an infant.”