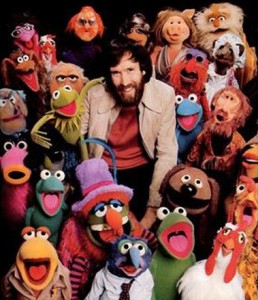 Jim Henson is the famous puppeteer behind the Muppets, which became wildly popular on both The Muppet Show, and Sesame Street. Though Sesame Street has always focused its learning programming towards children, and its counterpart, The Muppet Show, more for the ‘adult crowd, they have both met on common ground when it came to impressive live musical acts.

About the Muppet Show, from Wikipedia:

“The show was known for outrageous physical (slapstick), sometimes absurdist comedy, and particularly for using its puppet characters to create humorous parodies. Each show also featured a human guest star; after the show became popular, many celebrities were eager to perform with the Muppets on television and in film. By the end of its run, over one hundred guest stars had appeared on The Muppet Show.

From the early seventies to the eighties when both shows really took off, till now with the resurgence in popularity of Sesame Street, the appearances of live musical numbers has remained a solid mainstay of the programming. I have found twenty of the most famous classic live sets from the heydays of both of these tremendous shows, our first being from The Muppet Show. Jim Henson was a genius.

And then there’s this… Kermit singing ‘Rainbow Connection’.
I’m a 35-year old guy and this damn song chokes me up EVERY time.