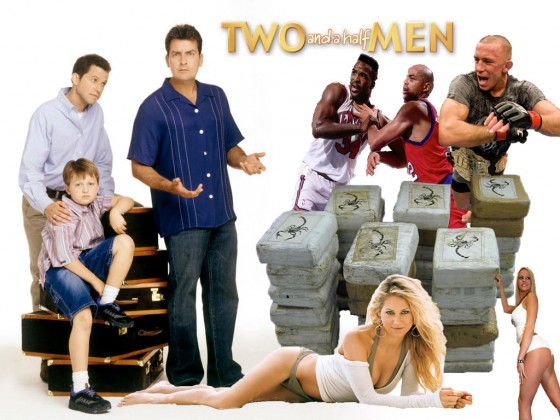 Yet the world comes down on Charlie Sheen for putting it all together.

As a purveyor of athletics, I’ve been wondering why some of the world’s most talented athletic performers haven’t considered this recipe for success (listen, that’s success… Charlie makes $2 million an episode… imagine if he was playing 82 games a year in the NBA or 162 in the MLB). As purveyor of life, I’ve been wondering why those who’ve fallen short of their full potential aren’t taking the dive and utilizing Charlie’s guidance for a new tomorrow.

If the Sheen can do this, anything is possible… and I wish the following athletes would have realized this some time ago. 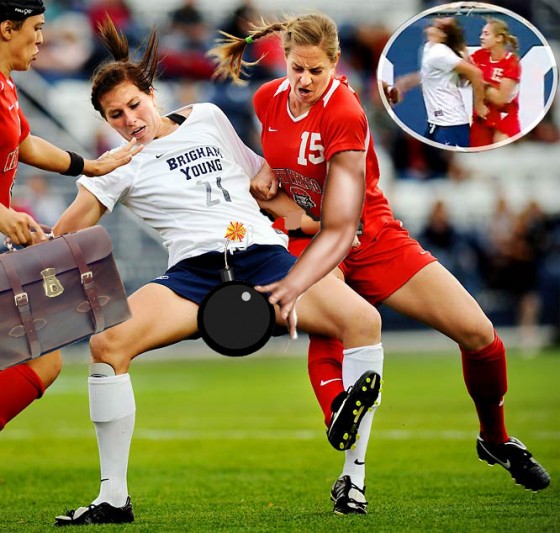 Elizabeth Lambert, doing whatever it takes to win.

If you know women, you understand one advantage women may have… they can be MUCH more violent than men, and nothing sharpens the wits for violence like cocaine… and no one does female sports violence like Elizabeth Lambert.

In case you forgot, Lambert was the soccer-playing vigilante from the University of New Mexico. She gained fame in 2009 after earning an indefinite suspension from collegiate soccer due to lovely sportsmanship tactics such as hair pulling, punching, and flagrant attempts to cause knee damage. All of that was caught on tape, that tape was caught by the internet, and the rest is viral history.

We haven’t heard from Lambert since… and that’s a shame. If she had accepted a suitcase full of cocaine, she could have been an impact player in the English Premier League… where being a violent asshole is endearing.

By the way, a quick Google search reveals her favorite food is tacos… I’m serious. It’s the first fucking hit that comes up on Google after the YouTube clips. 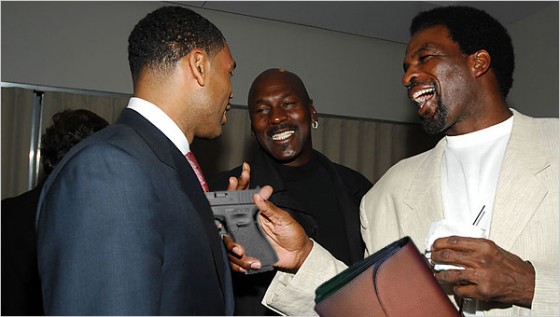 Cocaine — a high-priced way of getting high — has a mystique. Called “the caviar of street drugs,” Cocaine is seen as the status-heavy drug of celebrities, fashion models, and Wall Street traders… Effects of cocaine include an increasing sense of energy and alertness, an extremely elevated mood, and a feeling of supremacy.

Highly priced… mystique… caviar… celebrities… feeling of supremacy… I can’t think of a better home for a suitcase full of cocaine than the National Basketball Association. It sounds like a match made in heaven.

And I can’t imagine a more perfect subject to test my theory than Charles Oakley. The famed role player who served as the muscle for the greatest of all time (that would be Michael Jordan… would think that’s established by now) is respected as one of the most feared men the league has ever known… feared not for his play, not for his skill or his hardwood acumen, but for his ability to scare the ever-lovin’ shit out of anyone that came his or Michael’s way.

By all accounts, he was clean and living healthy. Give him a suitcase full of cocaine and he’s in line for the Hall of Fame… and probably still working as MJ’s muscle in a different venue.

And the Bobcats would probably be relevant. 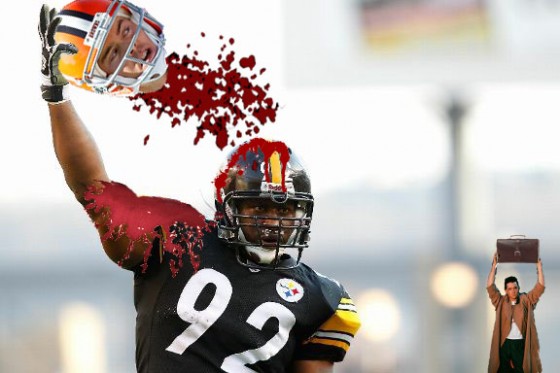 Performance in violence, where coke serves a purpose.

I’ve never been a dedicated user of cocaine – I’m poor, not of benefit for an aspiring coke addict – but everything I’ve read, watched, and seen leads me to believe anyone working in the field of violence would benefit from such offerings.

Today, James Harrison may be the most prolific waiter of violence in the universe of professional athletics. This season, Harrison was fined more for violent hits than the price of your average six-bedroom, three-bath home in Pittsburgh. He put several players out with concussion or injury… and he did it with style. His work served as fodder for one of the most entertaining debates in the NFL this season and he made no apologies for his approach to the job.

Despite the financial woes and criticism, Harrison helped the Pittsburgh Steelers get all the way to the Super Bowl. Give him a suitcase full of cocaine and you’re looking at the Super Bowl MVP, the defensive player of the year, and the man responsible for the death of at least four different players this season.

In my humble opinion, he’s one suitcase full of cocaine away from Canton.

(Canton… home of the Pro Football Hall of Fame… if you’re reading sports at Gunaxin, you should know this. Fuck’s sake.) 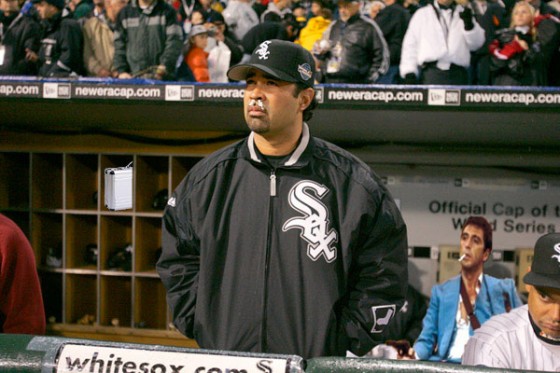 Don't have to be a player to enjoy a bump.

Here’s the deal… I racked my brain trying to think of the perfect baseball player for this occasion. Most that came to mind played in the ’70s and they actually owned a suitcase full of cocaine.

If we’re turning our focus to the MLB of today, I can’t imagine a single player worthy of such benefits… not one. They’re all assholes, and if they aren’t assholes, they’re fat and we want them to stay fat. I don’t want to make the world’s biggest assholes even bigger assholes. I don’t want to turn the fat guys skinny.

However… I can’t find a single coach throughout the world of sports who would shine in the light of cocaine more than Ozzie Guillen (yes, they call them “managers” in baseball… they also call Bud Selig “boss” and AIDS-spitting Roberto Alomar “Hall of Famer”… fuck them).

The man is famous for not giving a shit, for blasting members of the media (and members of the opposition) with curse-laden tirades, and for some of the most erratic and (for some) offensive behavior in the game.

Would a suitcase full of cocaine make him a better coach/manager? Maybe… maybe not… but you cannot deny this.

A suitcase full of cocaine will make Ozzie Guillen ten times more entertaining. Post-game baseball press conferences will suddenly draw ratings like Two and a Half Men, all of us hoping to see Ozzie go completely ape shit on a room full of ass-kissing beat writers and smug-ass baseball “purists.”

It needs to happen. Now. 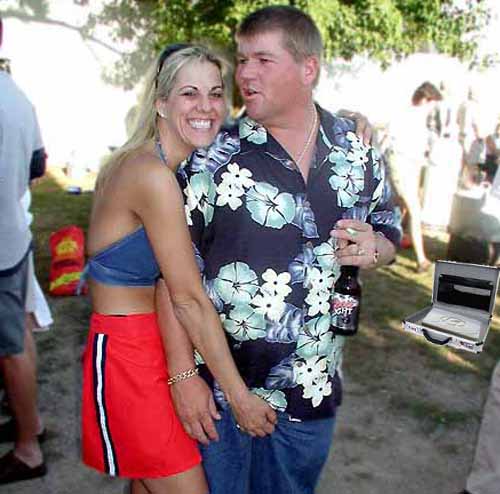 The best part of John? No Photoshop necessary.

The best thing about John Daly… I don’t have to Photoshop pictures of him. The menu of offerings put forth via Google Images is so tantalizing as it is, there’s no need to make them any better.

This guy set the benchmark so high for fellow golfers, I’m not sure we’ll ever see a match. Drunk, high, abusive, unapologetic… that was John Daly at the peak of his golf career, and I’m not sure he wasn’t buying suitcases full of cocaine at the time. I would expect he might have been.

I’d also expect the game might be interesting again if we went back to the good ol’ days. The Tour should be paying Sheen to visit Daly on the bus (he’s like John Madden… Daly uses a bus to get around the country to swing sticks). Not that Charlie needs the money, but he could use a friend. John could use a friend as well.

And their friend should be a suitcase full of cocaine. 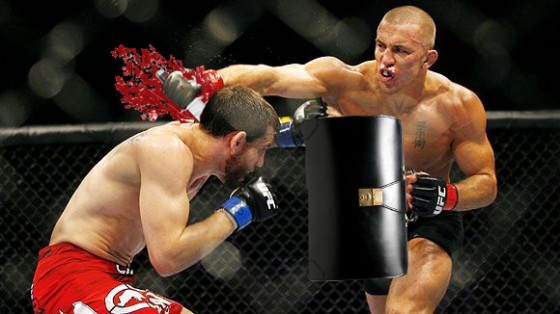 An innovator and leader in violent entertainment.

My friends tell me that would be George St. Pierre… like I said, I’m poor thus I don’t pay $50 for pay-per-view to see it myself. My friends are good people so I’ll trust their word.

If we’re going to try, let’s do it right. Let’s give it to this guy. 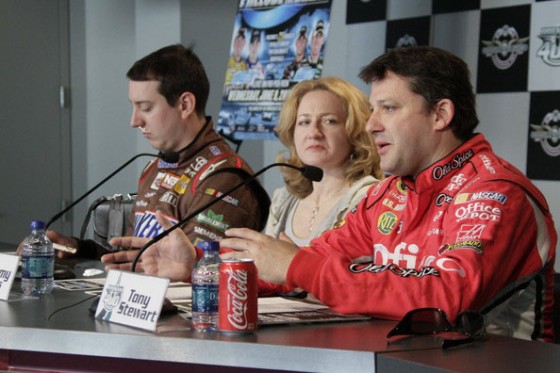 I’m looking for a way to make left turns entertaining. The bulk of the NASCAR-loving public – and that is a tremendous group of fans, many of which hail from the south… where morals waiver with the wind or the arrival of your cousin – suggests nothing is as exciting as a wreck.

With that in mind, I’d suggest you give the biggest asshole in the “game” a suitcase full of cocaine and let the magic unfold. Everything I’ve read leads me to believe Kyle Bush is that asshole, and after watching some of his clips I’d have to agree.

This guy is a complete and total asshole. Seriously… he makes Tony Stewart look like Rachel Ray.

(Side note for NASCAR: you can’t find a better fixture to put  in the chair between Kyle and Tony than HER, huh?)

Rubbin’ is racin’, right? If you want more rubbin’, if you want more aggression and more mechanical mayhem, I see a suitcase full of cocaine as the perfect solution. Put it in the hands of Kyle Bush – one of the biggest jerks in all of sports WITHOUT cocaine – and you have the perfect experiment for this theory. 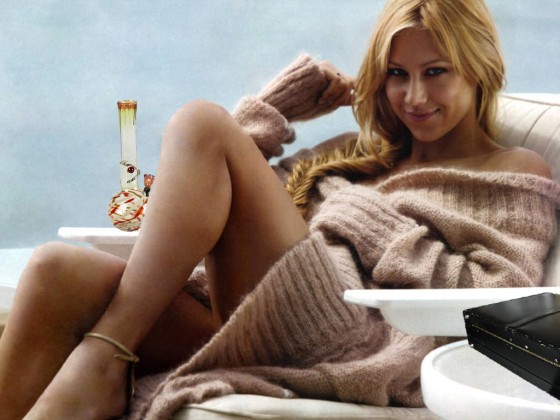 Anna... a sports tradition as potent as coke itself.

I understand… she’s not really an “athlete,” I’ll apologize to all of the true female athletes out there, and I’ll invite you to skip to number two (though I doubt any of you made it this far into this thing… would bet you dropped me to send hate mail after Elizabeth Lambert).

That said… I’ll stretch the definition of “athlete” to get a suitcase full of cocaine in this girl’s hands. If we’ve learned anything, it is this:

I’m sorry. I’m a man. I have needs and desire, and those needs and desires demand those facts not be denied. Anna Kournikova with a suitcase full of cocaine… I challenge you to find any sports-lovin’, cock-sure man that doesn’t see the glory in that. 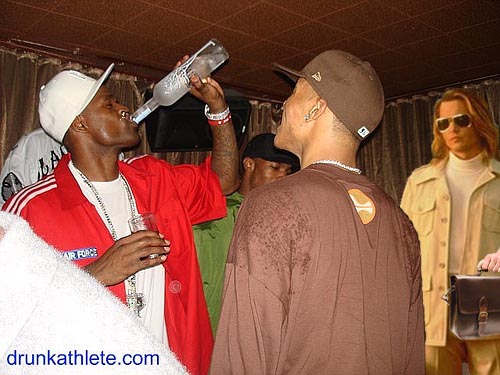 And you think the NBA parties now? Granted, you would think Ron Artest might be near the top of this list and its hard to deny Artest might be the best option the NBA has to offer… but those in the know understand.

When you talk crazy… a pure, true, criminally-insane style of crazy… you talk Stephen Jackson.

While Artest was charging into the stands to fight, Jackson was actually fighting… on the court, in the stands, against any and all he could find in Detroit that night. Since “Malice at the Palace” the world has been waiting for Jackson to strike again. Every night he hits the hardwood and puts on a show suggesting he is on the verge of destruction. The lifestyle this guy leads away from the court (see above) suggests he carries the same I-don’t-give-a-fuck attitude to the club.

Can you imagine the spree of bloodshed and brutality that would be unleashed by giving Jackson a suitcase full of cocaine? 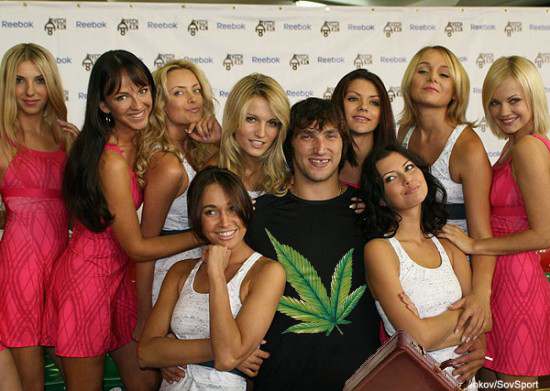 The talent, the drive, the passion... on and off the ice... are unmatched.

As we stand in the world of sports today, I fail to identify a single individual boasting as much talent, skill, bravado, confidence, and comprehensive athletic prowess as Alex Ovechkin. He is the most dynamic player in the most demanding of professional sports and it is impossible for me to imagine a more suitable recipient for a suitcase full of performance-enhancing cocaine than hockey’s best.

However, Ovechkin earns our top spot for one outstanding and undeniable fact, an endearing character trait he readily embraces in full public view… his insatiable appetite for women. This guy loves women. You’ll find Ovechkin in one of three scenarios, no matter what time of day or what time of year we are discussing.

From what I’ve seen from the athletic world today, I sincerely doubt anyone performs as well in all three. Give him a suitcase full of cocaine and I shudder to think what might unfold.

I want to see it, ’cause Charlie’s headlines wouldn’t hold a candle to the wondrous world we would witness if that world gave a suitcase full of cocaine to Alex Ovechkin.