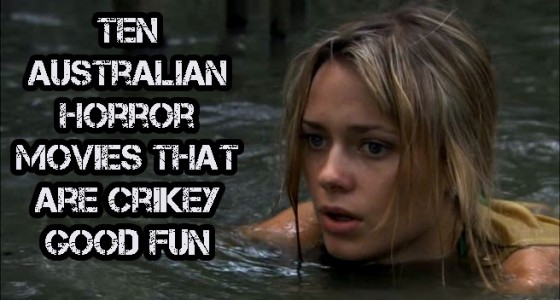 When it comes to horror movies, America and Japan have kinda had a strangle hold on the market in recent years. Both countries have reputations as being the preeminent suppliers of shocks and thrills when they’re not directly borrowing original material from one another. However, these two big screen juggernauts aren’t the only ones producing quality horror flicks. Australia has been a proven purveyor of scary cinema since the 1970s. Here are ten such films that fit the bill.

A nice little trip to study Aboriginal rock paintings goes horribly awry when one of the party turns into a savage beast after a late-night swim in a nearby pond. The special effects are solid and the blood quotient is off the charts as the six friends begin to cannibalize one another in a fit of “primal” rage. It gets a tad silly by the end, but it’s still worth a watch.

This wild boar run amok tale was directed by Russell Mulcahy, the same guy responsible for Highlander. While not as good as that immortal classic, it’s hard to deny how damn good Razorback looks and sounds. The titular creature is rarely seen, due to shoddy effects, but there are plenty of over the top and laugh out loud moments to satisfy the horror palate.

Let’s call this one the Aussie version of The Hills Have Eyes. A group of hikers embark on a search for the elusive Tasmanian Tiger (not Devil) only to find a bloodthirsty family of hungry cannibals. Its got gruesome deaths, creepy inbreeding and a dash of human torture thrown in for good measure. The plot is predictable, but there are enough chills to keep interest from waning.

Remember Jeepers Creepers? Sure you do. Well, this flick probably served as inspiration. A over the road truck driver tracks a serial killer who preys on hitchhikers. Scream Queen Jamie Lee Curtis plays one of the unsuspecting victims. What it lacks in winged demons consuming body parts, it makes up for with genuine suspense. Plus, there’s a Dingo!

Based on a short story by Raymond Carver, this isn’t so much a straight horror film as it is a weird mystery. Four fisherman find the body of a murdered girl, but wait days before notifying the police. The decision fractures a community and disintegrates a marriage. Meanwhile, a killer roams free in the Outback. A version of this story can be seen in director Robert Altman’s Short Cuts.

You can’t have a list of Down Under terror without a giant man-eating crocodile. Gorgeous Top End scenery and an incredibly meancing reptile highlight this surprisingly good Jaws clone. A quiet river tour turns deadly when a tourist boat crosses into the territory of a 22-foot-long croc. It’s on par with Lake Placid thanks to badass creature effects. Stars a pre-Avatar/Clash of the Titans Sam Worthington.

Director Peter Weir has made some great films during his acclaimed career. None more eerie than Picnic at Hanging Rock. In 1900, three school girls and a teacher vanish while exploring a strange volcanic rock formation called Hanging Rock. Were they kidnapped, murdered or overtaken by a demonic supernatural force? Nobody knows. This one will stick with you long after seeing it.

Loosely based on actual events, Wolf Creek follows a trio of backpackers who are kidnapped by a raving lunatic after their car breaks down in the remote Outback. The boneheaded twenty-somethings make their fair share of idiotic blunders which adds to the fun factor. However, the star of the show is hunting enthusiast/maniac tormentor Mick Taylor, whose sadistic laugh will make your skin crawl.

It’s like Open Water, except really good, and with a crocodile. Yet again culled from a true story, this frightful flick finds three vacationers stranded in a mangrove swamp after their fishing boat is capsized by a deadly croc. The pacing is intense and the lack of CGI effects heightens the threat level. As far as these types of genre movies go, this is definitely one of the better ones. Perfect for late night viewing with your chick.

In order to ease their ongoing marital problems, a young couple plan a weekend excursion to a remote beach. Their blatant disregard for the environment and indigenous wildlife comes back to haunt them when the animals strike back. You might think twice about that next camping trip after watching. Five words: don’t f*ck with mother nature. She’s got herself one nasty temper.