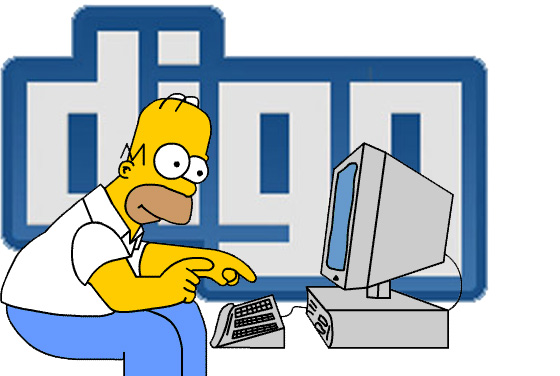 Digg is a puzzle that anyone is invited to try but few know how to solve. The problem is that the ‘bad players’ leave behind a trail of dirt that remains active, thus filling the Internet (or, to be more specific, Digg.com and search results) with even more garbage than it already has. While this is really the fault of Digg for keeping virtually everything submitted in its database, no matter how silly or useless, we can also blame users for being complete knuckleheads.

We’ll skip ‘bad submissions’ of decent content, which is usually done by Digg amateurs, and we’ll even skip ‘spam’ diggs meant to promote a site by the site’s owner. Instead we’ll focus on very prominent websites that have been submitted to Digg by people who shouldn’t be allowed to operate a computer.

www.ebay.com
Internet Based Auctioning Site, Enter The Age of E-bay

On May 3, 2006, an inactive Digg user discovers a most awesome website: eBay.

On Oct 16, 2007, Digg user swatward told the entire Digg community about a revolutionary search engine: Google. This one did get a lot of diggs, however, so perhaps it wasn’t so stupid after all. Maybe these people really did like this submission.

Digg user AudreyLynne is selling her photos on My Ebay. So she submits the My eBay url, perhaps not understanding that the url is different for each user and doesn’t go directly to her photos, or whatever it was she was trying to link to.

sports.yahoo.com
Check out Yahoo! Sports Page -All Screwed UP!!

Oh my god! There is an error on the Internet! Let’s tell everyone on Digg immediately by submitting that page. Never mind the fact that the page got fixed soon after the Digg submission went through.

Thank you, Digg user chrisvanhorn, for submitting MySpace.com for your political agenda. How’d that turn out for you?

Another site with Ron Paul spam is www.blogger.com, submitted by Digg user weztex.

Oh, and foxnews.com is submitted as Time for FauxNews to Substitute Paul for Guiliani due to pol.

Look what they put on the Wikipedia front! An article about South Park!

The next day, that article was gone off the front, but we’ll forever know on Digg on March 15, 2008, Wikipedia had an article about South Park on its front page.

www.youtube.com
So, everybody running for presidency needs a song?!

“look @ youtube.com front page, theres a freakin’ song for each campaign? what is this american idle for your Leader?!?! this is your leader.. not american idle.. let me guess, you will vote for whoever ‘simon’ says sucks the least. THIS IS YOUR PRESIDENT! I wouldn’t elect my president that stoops so low.”

Anything Star Wars related winds up on Digg, but in this case the user submitted the USPS main page, which of course changes over time. So now the USPS home page is forever in the Digg universe under this submission, and people who stumble upon it will be greatly disappointed to find that there is no mention of Star Wars there.

This user meant well, perhaps, but is apparently ignorant of the fact that washingtonpost.com is a breaking news site and changes frequently. “russell” linked to the home page instead of the article or gallery he was referring to. Now all this submission tells us is that washingtonpost.com had panoramas of Katrina’s aftermath on its front page Sept. 9, 2005.

Kobe Bryant scoring 50+ points four games in a row is certainly interesting, but there are two problems with this. One is that the use links to the front page of NBA.com and not the actual article, and the other is that Bryant wasn’t even the first to do this. Wilt Chamberlain did this and then some by averaging 50 points a game in a season. But according to Digg user duedermont, Bryant made ‘history.’