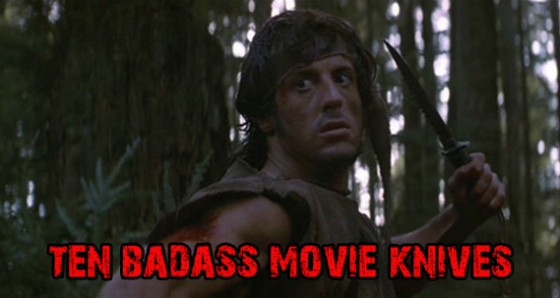 Guns and other weapons that go boom get all the hype at the movies. That’s cool and all, but how about some love for the good old fashioned knife? Any fool can shoot a gun. However, there’s something to be said about a guy or gal who can handle a blade. It requires the right combination of dexterity and hand-eye coordination to sustain maximum damage, which of course would be death. So, sharpen those senses and balance on the edge of your seat. It’s time to pay homage to knives on the big screen. Not just ordinary ones though. No siree Bob, we’re talking badass blades.

A mass murderer is born
Halloween

Young Michael Myers gets his first kill with one of mom’s butcher knives. Great for horror fans but bad for his teenage slut of a sister, who is his unfortunate victim. Mikey scores extra points for the clown costume.

A magical dagger
Prince of Persia: The Sands of Time

Prince of Persia is far from the greatest flick ever made, but that damn Dagger of Time is pretty effing wicked. Since it can travel back in time, it’s kinda like a DeLorean, minus the flux capacitor.

Ace’s switchblade
Stand By Me

Ace is the ultimate big screen bully. He’s prone to fits of violence, rules his gang like a tyrant and enjoys scaring the poop outta young kids with his switchblade. Without the knife, he’s still a badass, but with it he’s a big time badass.

Twin brothers are a bit scary in the first place, but twin brothers who are experts at throwing knives are really scary. This dynamic duo also aren’t afraid to kill British secret agents disguised as clowns. Can’t really fault them. Clowns are creepy.

Hit Girl steals the entire Kick-Ass movie. She carries a full arsenal of weapons, including a sweet butterfly knife, but her knife-on-a-rope is downright deadly. She can take out a trio of minions in no time.

The name is Jack Burton
Big Trouble in Little China

John Carpenter’s ’80s cult classic feature one of Kurt Russell’s best performances playing wise-cracking truck driver/reluctant hero Jack Burton. Jack might appear to be all talk, but he and his trusty knife are capable of inflicting serious damage.

Cobra could be one of the worst movies ever created or one of the best, depending on how you approach it. The story and dialogue are laughable, but the carnage and mayhem are glorious. And it has an absolute badass blade which only helps its cause. (Enjoy the fantastic movie music vide0.)

Mick Dundee knows a knife when he sees one. That’s because he carries one of the biggest, most lethal cutters this side of Queensland. A hint to all would-be muggers: don’t try to rob dudes dressed like Dundee. It will end badly.

John Rambo just wants to be left alone, but he keeps finding himself smack dab in the middle of trouble. It might have something to do with the ginormous knife he carries around, or it could be that he’s a whacked out of his mind Vietnam vet. More than likely it’s both.

Norman Bates is a disturbed young man, to say the least. However, when it comes to dressing up like mother and slaughtering beautiful female motel patrons with a phallic kitchen knife, Norm is the man.