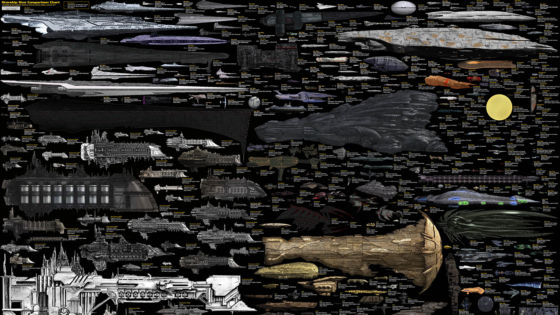 There have been plenty of wicked cool spaceships throughout the history of cinema. Ever since Georges Méliès took A Trip to the Moon back in 1902, filmmakers from across the globe have explored far away galaxies and solar systems with all matter of cleverly contrived craft. For the purposes of this list, we have elected to leave out a few of the more famous fictional ships. The Enterprise, Bird of Prey, Nostromo, Discovery One, Mothership and Millennium Falcon always dominate the conversation because they are superbad in every way. Rather than recycle these classics, we’re gonna call attention to some other badass candidates worthy of discussion.

Any ship that straps a megaton stellar bomb to its nose with the intent of reigniting the dying sun deserves a place in the badass hall of fame. This underrated flick is all the more impressive when you consider it was directed by the same guy responsible for Trainspotting and Slumdog Millionaire.

Haunted spaceships are downright freaky. None more so than the Event Horizon, which took a trip to a chaos dimension and returned with the ability to prey upon human’s greatest fears. This damn thing just looks evil.

If not for this post-apocalyptic hovercraft, Morpheus, Neo, Trinity and the rest would have been Sentinel fodder. Activate its EMP and watch artificially intelligent machines fry. The name alone screams badass.

Okay, the film isn’t anything to get excited about, but the Jupiter II is one badass machine. It hyperdrives through the sun for Pete’s sake. Is it realistic? No. But it’s still pretty effing cool. The original from the TV show is an all-time classic.

The “Titan” gets all the love, but the Valkyrie is the standout ship in this animated space odyssey. It’s fast, durable and is crewed by a mishmash of humans and aliens. You can forget about the formation of a new Earth without the Valkyrie repeatedly saving the day.

Technically, this isn’t really a spaceship, but any machine capable of flying above the skyscrapers of 2019 Los Angeles is too cool not to mention. Watching a Spinner take flight is still a sight to behold. If only Honda could figure out how to mass produce these babies.

When saving a planet in another galaxy you need a badass gunship to kick alien ass. The Gunstar fits the bill. Even if the pilot is a trailer park handyman recruited because he spends all his spare time feeding quarters into a video game.

Can you get a more ominous name than Hunter-Killer? When the machines became aware, they didn’t screw around devising the perfect ship to annihilate humanity. Even the distinct whine of its engines is scary.

Jango and Boba Fett’s home away from home is what you would expect a bounty hunter to fly. It’s sleek, intimidating and loaded with firepower. Of all the sweet ships imagined by Lucas, Slave-I is the badass of the bunch.

The Firefly class was made for smuggling, bootlegging and dodging the Alliance. Captain Mal Reynolds and his ragtag crew of outlaws escaped many a sticky situation thanks to Serenity. Although temperamental, Serenity stepped up her game when the stakes were high. It defines badass like few others.