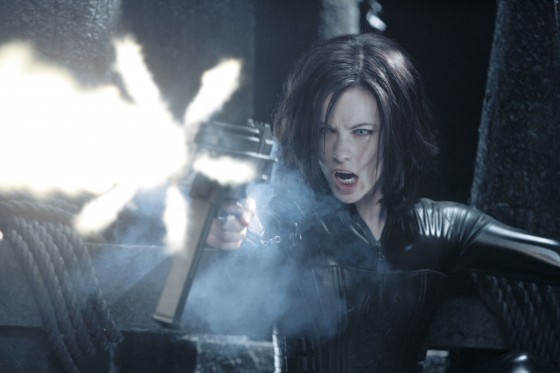 The narrow line that separates action films from horror has definitely found itself blurred a time or two. Typically, it makes much more sense to not attempt to ‘cross the streams’ since both genres tend to be so different in nearly every way. But, in certain specific cases, combining franchises actually works really well, but there has to be rules. Just because there’s action in a horror movie (see: lots of the Friday the 13th flicks) doesn’t make them action/horror. Conversely, just because there are frightening scenes in action movies (see: Predator –– not horror) doesn’t make them action/horror, either. But the ten on this list do qualify, and they kick all kinds of ass. Scary ass.

It was only a matter of time -- well, after Danny Glover discovered an Alien skull aboard the Predator's space ship, anyway -- that the two franchises (Predator and Alien) were going to battle each other with all kinds of action. And it happened, albeit pretty ridiculously, thanks in part to the Dark Horse comic series that, as it turns out, will match just about anyone in a head-to-head, up to and including Ash and Leatherface. Anyway, if you haven't seen either of the films, they're sadly all too self-explanatory and, also sadly, kind of crummy. But they are filled to the brim with action with both titular characters and their human chum. All in all, though, they promise what they preach.

How could you honestly go wrong twisting the original tale of Dr. Van Helsing into an action/adventure caper? Well, I suppose you could, especially if you just loaded it with CGI effects, half-naked writhing women, and just the most tenuous attachment to the source material... which is actually what happened. But those reasons do not make this movie any less pure, popcorn-munching fun! It's got Hugh Jackman, basically being Wolverine in a trench coat, and a slew of horror icons strewn throughout! It's loaded with really cool action scenes and a pretty cool werewolf transformation featuring the aforementioned Jackman. Not too shabby.

I have to admit, I was really skeptical about Priest when I first saw its arrival in theaters. I had read quite a number of the original Japanese comics and I always thought it had a really cool story and that, despite the fact that it was more of those stagnating vampires, it was pretty original. But, eventually, I needed to give it a try. And ya know, all in all, it was pretty well done. Paul Bettany stars as the Priest who has no choice but to defy his attachment to his clergy in order to fight a vampire menace that remain after years of war. His character retains his faith, which is the only thing that keeps him from succumbing to Evil. Well, that and his array of weapons and vast amounts of ass-kickery. Good action and a pretty solid story makes for a pretty cool action/horror.

If you've never seen the original The Thing from John Carpenter (well, original better remake of a '50s flick), a cursory glance at the first thirty minutes or so really wouldn't lead to a real ripping action yarn. Until all the proverbial shit hits the fan. Once MacReady and the crew realize that something not human is systematically infiltrating the camp, this quickly becomes as action packed as you like. Then, in the 2011 prequel (which as it turns out follows the same skeletal plot structure almost to a T), the action is amped up a tad and becomes a bit more pronounced. But for my money, It's Carpenter's masterpiece that remains a classic.

Though a vampire film series under its many intriguing layers, Nightwatch and Daywatch are so much more than that. In fact, were I to attempt to describe the underlying story, I'd prattle on forever. So, I'll let Wikipedia have the honors on this one:

In the prologue, which is set in medieval times, the audience is introduced to humans with special powers called The Others. The Others are allied with the forces of either Light or Dark, and the prologue recounts a great battle between the two factions. Geser, the lord of Light, realizes that the two forces are evenly matched and will annihilate each other. In parley with Zavulon, the general of Dark, the two agree to a truce in which the Light will form a Night Watch and the Dark a Day Watch to maintain the balance before the coming of the Great One who will choose either Light or Dark, and thereby bring one to prominence.

That's the story, and it does progress into modern times where several characters must decide between Dark and Light. The action is intense, often times furious, and beautifully filmed. There is a third film in the works and it looks to be just as good as these two.

Following along the same tread-worn path that the vampire genre seems to be taking, werewolf movies are precariously headed in the same direction. Sometimes it takes a story so skewed and different to break the mold that you have to wonder how it hasn't happened sooner. Dog Soldiers begins as some British Army infantry are patrolling the woods when they are attacked by unseen monsters. The survivors gather additional fighters and hold up in a house as they suddenly realize what they're hunting are hideous, ravenous werewolves. But not just any werewolves... these creatures look like giant dogs with big, extra freaky canine heads! The fight scenes are incredible and the battle between beast and man wages so intensely that it becomes scary. This is one of the best examples of action/horror around that is not a series.

Kate Beckinsale. That's really enough, dontcha think? No? Kate Beckinsale in tight leather? Yeah, I thought that might do it. Well let's not forget that she wasn't even in the third installment. Nope, the roll of Sonja went to Rhona Mitra. Also clad in a lot of tight clothing. Okay, the hot chicks aside, this is a really kick-ass series that focuses on the war between Lycans (werewolves) and Vampires. There's a whole hell of a lot of gun-play, martial arts, and liters upon liters of blood and gore. As action/horror goes, this series amps up both sides of the subject and really makes good use of monster mythology and exquisite action sequences.

The lineage of Marvel Comics franchises can definitely trace their now solidly planted roots back to Wesley Snipes and his portrayal of Blade, The Vampire Hunter. Just as the title says, Blade's job is to systematically rid the world of the vampire menace. And they're everywhere. But the real special difference here is that Blade has all the powers and hunger of a vampire with none of the drawbacks, because he's also half-human. He is the 'Day-Walker' and he uses that particular talent, along with his endless supply of ass-kicking weaponry and knowledge of martial arts to weed out and slaughter the bloodsuckers. Spanning three films, Wesley does a fantastic job of taking on the action hero/horror persona.

Granted, the original Alien is more often touted as just a standard horror flick. And it's great. But, the sequel, Aliens, became one jacked-up action/horror like none other before it. Sure, one could argue that Predator should be considered action/horror too, right? Well, no. You see it's more of an action/alien flick. There really wasn't that much horror to it or even really any kind of the 'tense terror' you get with action/horror. Sure, semantics, I know. But since Aliens and its follow-ups tend to adhere to the action/horror (as well as the new Prometheus story coming this summer) I have no issues fitting this series into the genre. Whew... went a little long-winded there. Anyway, big guns, scary aliens, and a vicious Sigourney Weaver equals awesome.

How do you make an action/horror franchise that will eventually gross you almost $700,000,000 dollars? Well, having it star the delicious Milla Jovovich is good start. Basing it (however loosely) on a well-received video game franchise called Resident Evil is a great second step. Because, as it turns out, everyone loves zombies (another horror staple nearly beaten to death, literally) and everyone loves a smoking hot chick shooting the shit out of them. Loaded with guns, sharp cutting implements, explosives, and a whole ton of the walking and hungry dead, Resident Evil has done well enough to garner its fifth installment arriving in September. And yes, Alice is back... Milla that is. And yes, I'll be right there in the theater watching it. What can I say, it's the epitome of action/horror.