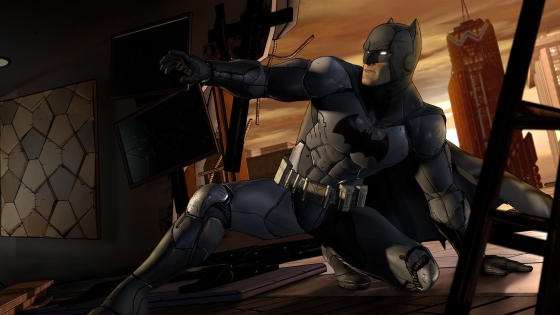 With the release of Batman: The Telltale Series story 2 at the end of last month and a third installment soon to follow, we were curious just what were some of the best Batman video games of all time since there are so damn many of them. In fact, since 1986 for home computing systems like the Commodore 64, Batman has graced our gaming needs. As of September (and soon to be on October 18th with a new collection), Batman has been in over 40 different games. So which were the best and which just reasonably playable? Well, we’re gonna show you ten of the best, and a few of the not best. Because he’s Batman, there is no ‘worst’.

Right off the bat, we start a theme here. Batman is faced with the monumental task of gathering all the villains fleeing Arkham. You can play as Batman or Batgirl, but there are any number of heroes to assist you in your mission.

Based on the TV show of the same name, this hit game features the Caped Crusader once again going head-to-head with just about everyone in his cartoon Rogue’s Gallery. In this game, you need to also be Robin in order to advance through stages in the game.

Played under a time limit, and with the highest difficulty level titled, “Dark Knight”, this co-op story game allows Batman to acquire new abilities throughout as he fights his way through villainous gangs. The biggest draw was, of course, the introduction of a new bad guy named Sin Tzu. However, his popularity never made it past this game.

Here we have a truly new method of gameplay for the Dark Knight: Intimidation! That’s right. Whereas typical Batman games are pretty straight forward punch-and-kick affairs with a few weapons tossed in, this one gives you the ability to frighten your foes and even call in an army of bats. It is a really fun game.

Based on The New Batman Adventures animated show, this game plays in its world and showcases all of the voice cast reprising their roles. In the game, Batman goes on a series of missions where each villain is caught up in a crime that connects, sometimes tenuously, with another. Many rogues make appearances, and to no surprise, the Joker is behind it all.

Though based in name, and some game play, on the Tim Burton film, this classic game released for the original run of next-generation home consoles has a great list of characters. A number of DC Comics villains appear as enemies in the game including Deadshot,KGBeast, Maxie Zeus, Heat Wave, Shakedown, and Nightslayer. The bosses in the game are Killer Moth, a device known as the Machine Intelligence System, the Electrocutioner, a machine known as the Dual-Container Alarm, Firebug, and the Joker.

The Joker is dead. Batman struggles with the loss of his evil other half, yet sees the Gotham around him as safe for once. However, on Halloween night, Scarecrow has planted his new strain of toxin bombs throughout the city, and with Oracle’s help, he discovers where they’re made. Soon, after falling into Scarecrow’s trap, Batman realizes The Joker is still alive… in his own head! This game features great open-world environments and fantastic game play.

Sure, once you’ve played a LEGO video game, you’ve basically played them all. But that fact takes nothing away from just how cool and purely fun LEGO Batman is. You begin as both members of the Dynamic Duo, but to advance each character has suits and abilities only he can perform. With studs to acquire, people to rescue, and a full Rogue’s Gallery to defeat (and play as), this game with happily occupy a lot of your day.

The Joker once again provides the main focus for Batman in this game. As the hero is called to Arkham Asylum to hopefully stop his evil ways, he finds himself trapped in the four walls of the prison and forced to battle the likes of Bane, Killer Croc, and Poison Ivy before exiting the Asylum and chasing Joker through Gotham. This game marked the first in the new era of open-world, endlessly playable Batman games.

Largely considered the best Batman game of all time, Arkham City picks up a year after Arkham Asylum and follows new Gotham mayor, Quincy Sharpe, as he turns much of the city’s slums into a prison facility. Run by Hugo Strange, the inmates are allowed to do as they please within the city’s confines as long as they don’t try to escape. Unbeknownst to the new mayor, Strange is also manipulating both him and the security company under Quincy’s employ. Meanwhile, the Joker is dying from the events taken place in Asylum, and it’s all up to Batman to get to the bottom of everything.

Batman Forever – According to Wikipedia, “Punching enemies is nothing more than a delayed sequence that continues well after the enemy is dead.” and, “the sluggish gameplay, mediocre graphics, and weak sounds really kick this cart to the bat curb.” Nothing worse than slooooooow punches.