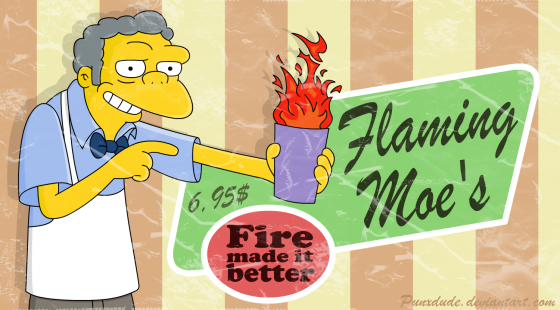 When cartoon characters have to eat (well, when they aren’t eating at home, that is) they frequent the local restaurants, bars, and pubs in their respective towns. Futurama’s New New York, The Simpsons’ Springfield, Family Guy’s Quahog, and plenty of other cartoon towns feature eateries we’ve all come to know and love. So pull up a chair and enjoy the ambiance. Or probably the beverages. 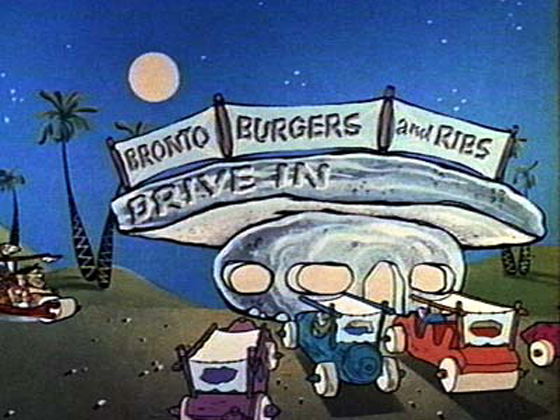 Bit O’ Trivia: Though the diner is seen in every Flintstones episode with the classic tipped-car opening, it’s rarely seen in the actual show. 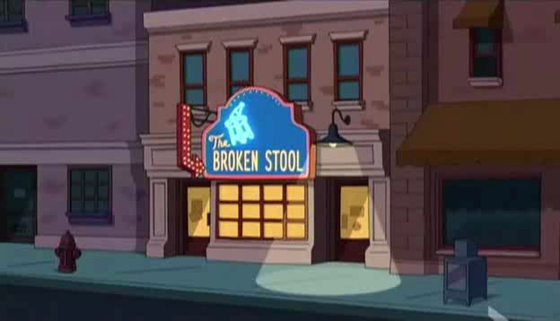 Bit O’ Trivia: According to The Cleveland Show Wiki –

Their policy is “You must at least look 21 to drink in this establishment”. Beverages that they serve include beer and sugar-free Stoli Red Bulls and Stool Bend Lager, while food includes sandwiches and a “Broken Stool Sampler”. 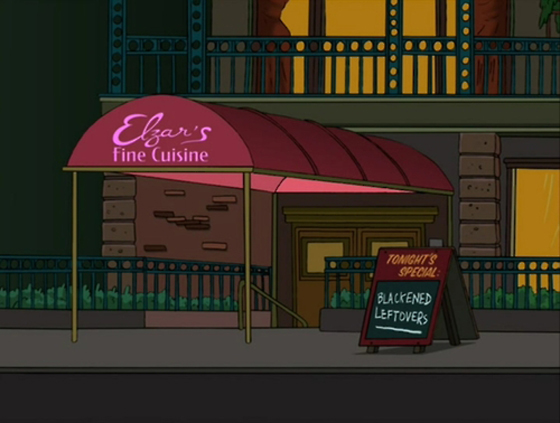 Bit O’ Trivia: A Quote from the Futurama Wiki –

Elzar: Enjoy our private dining room, folks. This is where we serve our richest, most successful chumps!
Fry: Tonight, that’s us!
That Guy: What have you got that’s really overpriced?
Elzar: Everything. 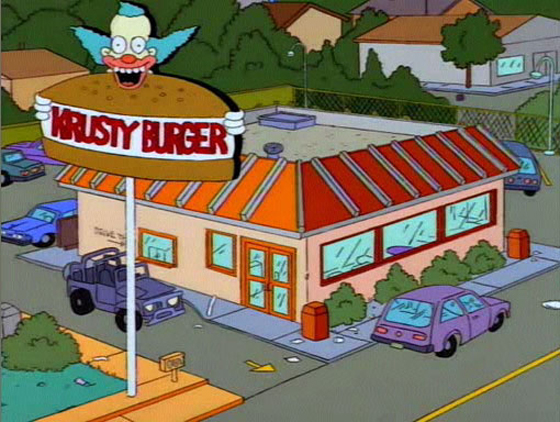 A Burger King commercial featured Krusty telling the audience to not buy “The Whopper” and instead buy his deep fried Krusty Burger. He then proceeded to beg the audience stating that he was behind on seven allimonies and wearing paper bags for shoes. 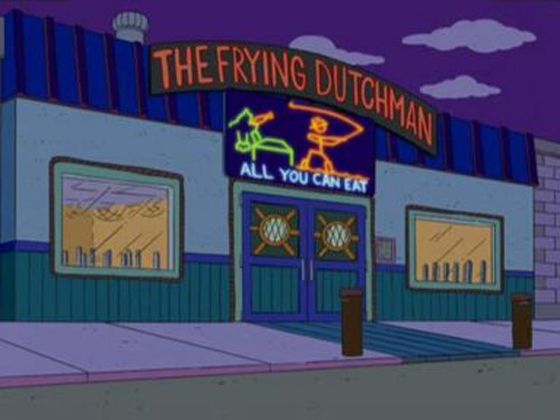 The restaurant had an all-you-can-eat buffett, which Homer took advantage of and nearly bankrupted the restaurant in the process. When Captain McCallister gets annoyed at Homer for eating all the food, it turns into a court case. Although Homer technically won the court case, McAllister had Homer eat all of the food in front of everyone at the restaurant as part of an “out of court settlement.” 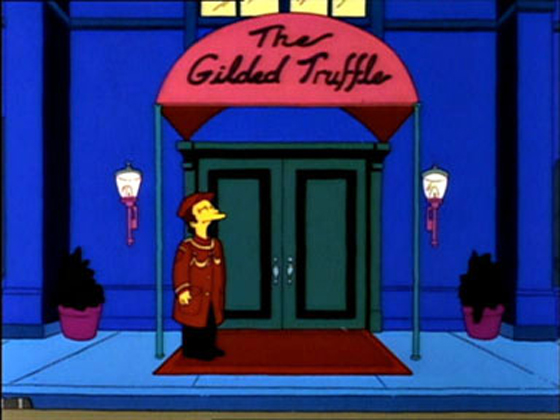 Homer took his family to The Gilded Truffle after he took over Krusty’s time slot on Channel 6. While there, he signed an autograph for Ralph Wiggum and dreamed of saving Abraham Lincoln and John F Kennedy from assassination. 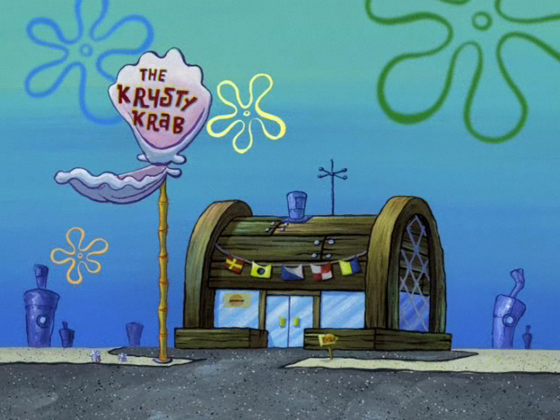 Bit O’ Trivia: According to the Spongebob Wiki –

In the scene where SpongeBob washes his hands in the training video (also seen in Karate Choppers), there is a poster that says “Please wash your fins”. Under those words there are words in Spanish that say “Wash the fins” (Lave las aletas). 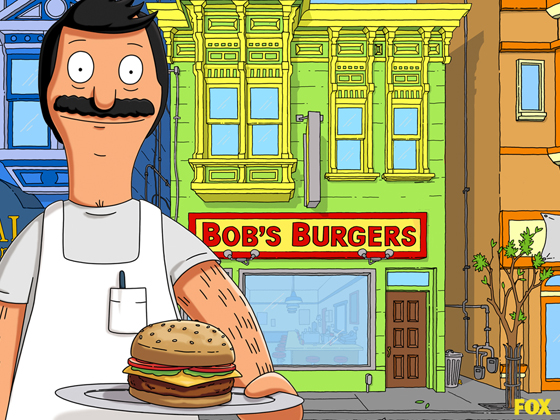 Bit O’ Trivia: According to Wikipedia –

Every episode features a “Today’s Special” on a chalk board on the wall behind the counter. The name of the special is usually a play on words that indicates what comes on the burger (e.g. “It’s Fun to Eat at the rYe M C A Burger”: Comes with Rye, Mustard, Cheese, and Avocado).

Bit O’ Trivia: According to the Family Guy Wiki –

If Frank Sinatra had never been born, The Clam would be long abandoned as of 2009 in the Apocalyptic Universe, as it is seen in shambles. 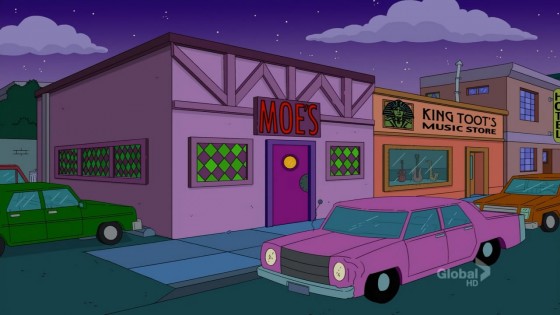 Bit O’ Trivia: According to The Simpson’s Wiki –

In “Moe Letter Blues” Moe mentions moving to Springfield because its zip code on a calculator spells “boobs”. This means the zip code for Moe’s Tavern is 58008, also in an episode Homer walks to Moe’s Tavern and is proud of himself only to find Bart waving at him from their house just up the road, suggesting that Moe’s is on Evergreen Terrace and that the Simpson’s House Zip ends in 8008.