Media > Movies > The Ten Best Sci-Fi Movies of All Time

The Ten Best Sci-Fi Movies of All Time 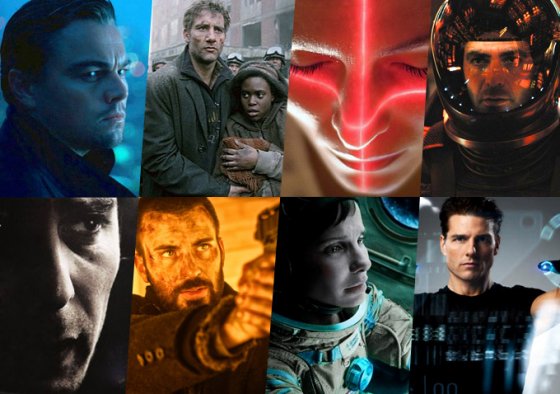 We here at Gunaxin love to mix things up, let’s just get that out of the way right off the bat. When we discover something on the web that says “The Top Ten Best” something, we are not only intrigued but also often ready to form a rebuttal and create a better one of our own. Unfortunately, Top Ten lists are highly subjective and divisive… but, we like to do them anyway because more often than not they really get folks’ ire rising. In this case, we are speaking directly of this list of The 10 Best Sci-Fi Movies of All Time from Mentalfloss.com in which the author does her very best to minimize the entirety of cinematic Science Fiction. Oh, we’ll just see about that.

That being said, we will concede that there are some on this Sci-Fi list that we fully agree with, yet there are others that simply leave us wondering what the hell she was thinking. Also, in our case, we are going to be fair by giving a list of Five Honorable Mentions just to expand the list out a little because, frankly, ten is a dangerous number. So, with all that under our belt, here we go. Please, feel free to be nice over social media and let us know just how incredibly wrong we are. Hey, it’s how we chose to make our Science Fiction Movie list, it’s only fair. 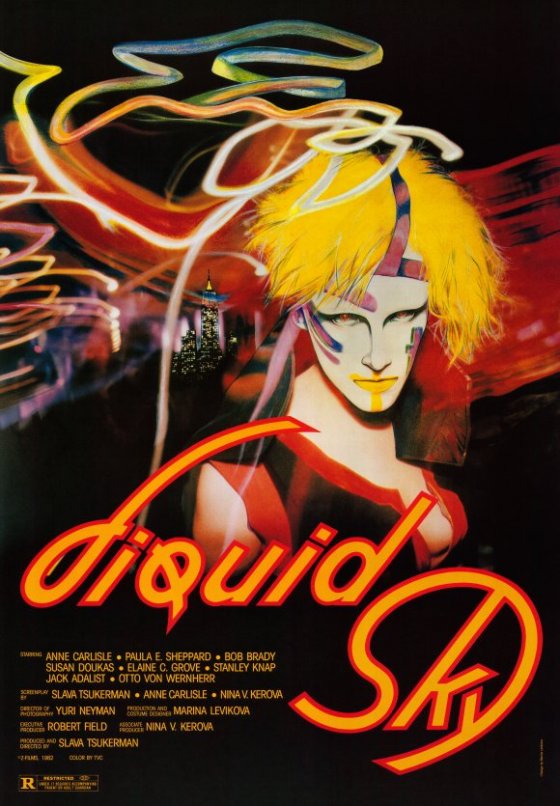 We’re starting off weird, but we’re also starting off with a film that currently sits at 94% on Rotten Tomatoes, a rating that not too many can claim, even on this list. This movie “is seen as heavily influencing a club scene that emerged in the early 2000s in Brooklyn, Berlin, Paris, and London called electroclash.” Again, not too many Sci Fi flicks can claim that kind of accolade, even if it is a bizarre one. The film revolves around models Margaret and Jimmy, both played by Anne Carlisle and of which Margaret is a bisexual. It takes place in the 80’s and features heavy use of heroine, then referred to as Liquid Sky. Within the narrative, there is a group of aliens that affect the sex life of Margaret who begins killing people she has dalliances with. And then it gets weird. This is an odd duck, but it is really well made and it is Sci Fi through and through. 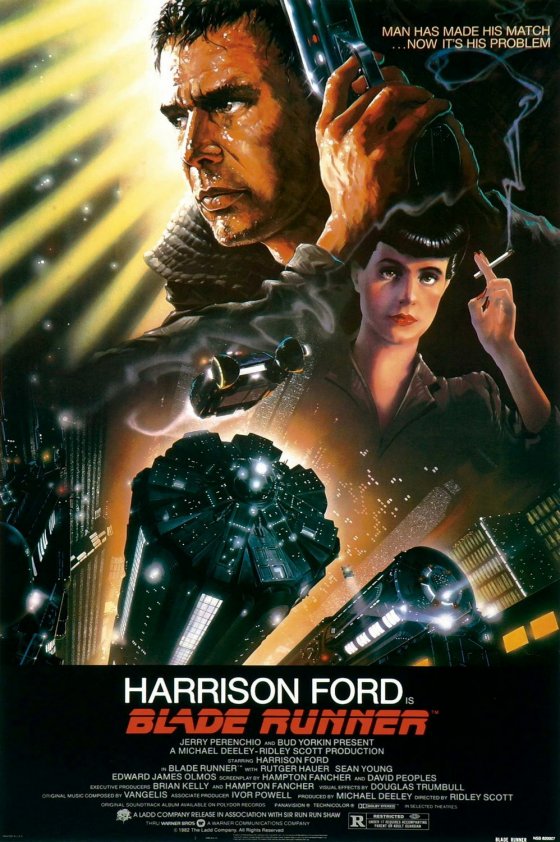 This is one of the selections on the list from the site that started this all and we obviously admit it is a great choice. In fact, there is finally a sequel due to this masterpiece on October 6th titled Blade Runner 2049. Basically, in this film, it is a dystopian future where Replicants indistinguishable from their human counterparts are made by the Tyrell Corporation and shipped off Earth to perform their duties. If they illegally attempt to stay on-world, they are hunted down and ‘retired’ by Blade Runners. Harrison Ford plays Rick Deckard, an ex-cop hired to make sure the new Replicant models operate well. He soon discovers the company owner’s assistant is a test Replicant model who thinks she’s human. Classic.

8) Planet of the Apes 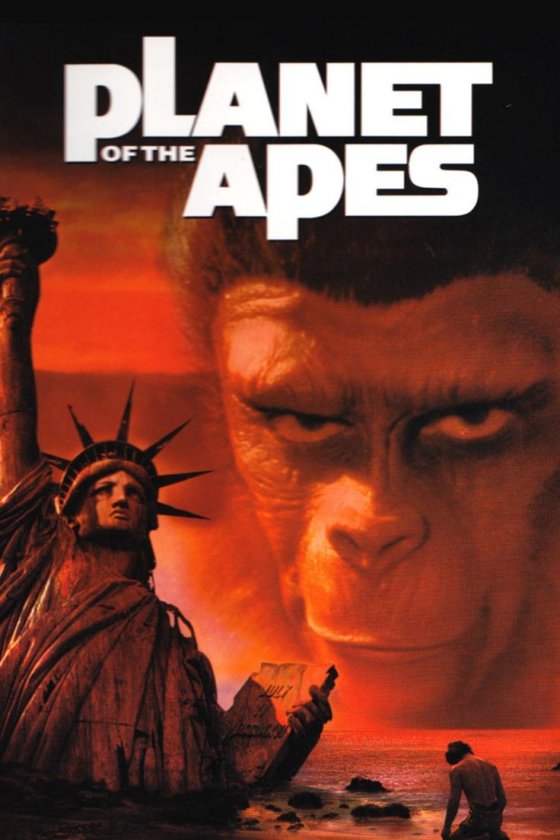 No, we’re not talking about the 2001 Tim Burton piece of crap. This is, of course, the 1968 Science Fiction masterpiece that not only launched a series of films between this and 1973, but also the trilogy of prequels launched in 2011. At its most basic, it’s the story of an astronaut crew who crash lands on an odd planet they assume is desolate, yet soon discover that it’s been over-run by a species of hyper-intelligent apes. Though they assume the planet is some distant world, they soon discover it is indeed the future of Earth. Not only does this classic hold a 90% on Rotten Tomatoes and therefore Certified Fresh, but it has been entered into the National Film Registry as being culturally significant. 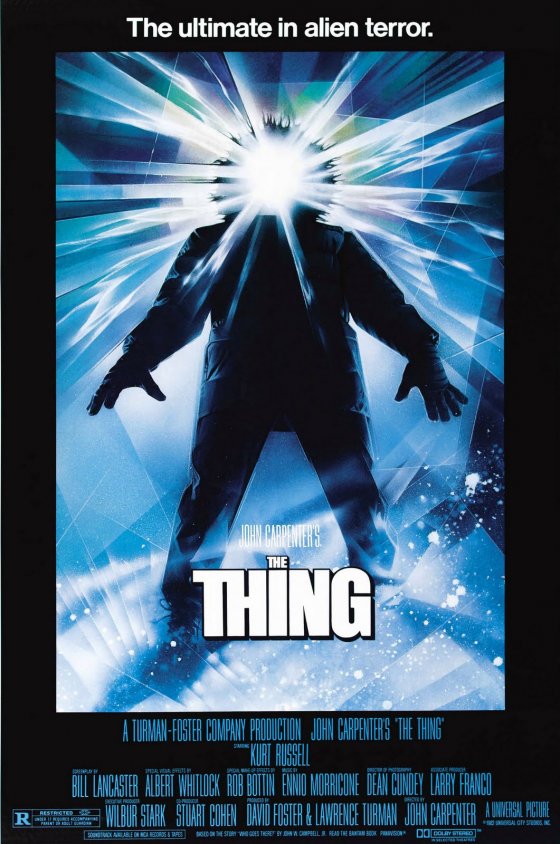 Yes, some might consider this movie Horror rather than Sci Fi, but the simple fact is it’s an alien creature that becomes the antagonising focus of this yarn and that fact alone makes it Science Fiction. Directed by John Carpenter, this movie features an isolated crew working in Antarctica as they pursue a dog running away from an abandoned science encampment. After they land and the helicopter is destroyed, the dog mutates into a creature that is eventually, supposedly destroyed. After another crew examines the station, the alien creature begins its systematic rampage through the unsuspecting crew, disguising itself as the humans and another of the dogs. The end is a twist of pure terror as we’re all left wondering who is who. This movie has quickly garnered cult status and is largely considered one of the best Sci Fi/Horror flicks of all time. 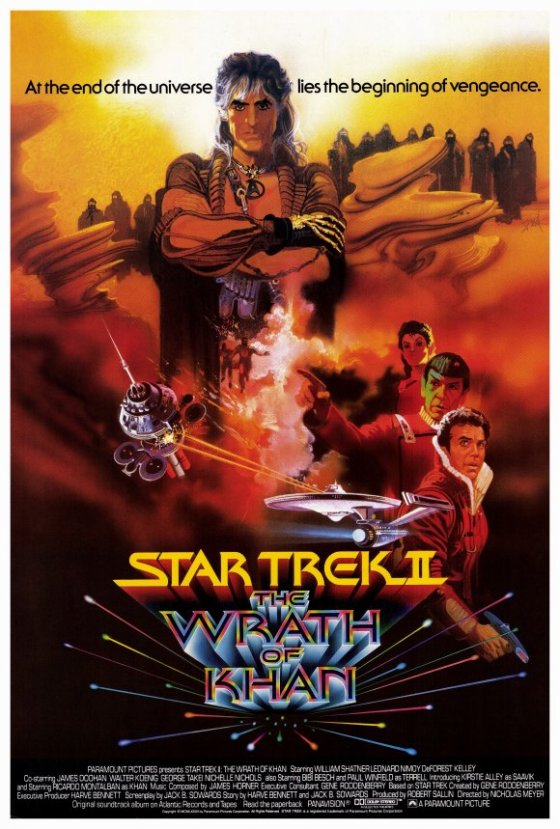 By this point in Trek history, we have become very familiar with just who the crew is. They’ve boldly gone through uncharted space in a TV show, and a movie that was, well, pretty boring, actually. It was this, the sequel, that truly made Star Trek something special. In this movie, the Enterprise gang is being toyed with by a genetically engineered tyrant named Kahn who are, in turn, attempting to stop him from finding and stealing a powerful terraforming device called Genesis. After an all-out battle, the Enterprise seems doomed until Spock, in an act of selfless heroism, places himself in mortal danger in the warp core in order to fix it, thereby basically killing himself. It’s tragic and spectacular all at the same time. An instant classic. 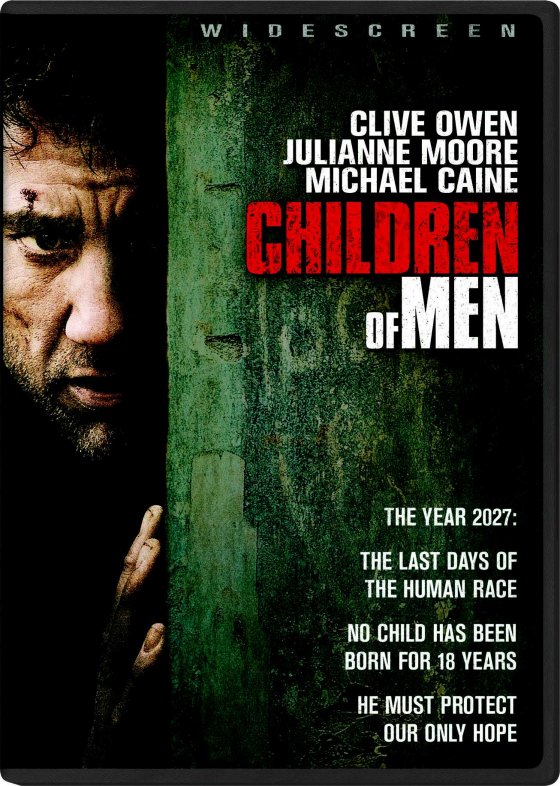 In this dystopian Sci Fi yarn directed by Alfonso Cuarón, it is the year 2027 and years of human infertility from a 2008 Influenza Pandemic have left the population on the brink of total collapse. Clive Owen plays Theo who is paid to protect and transport a woman named Kee who it turns out is pregnant. There is a human refugee ship called Tomorrow who has sworn to protect those in need, and they know this is Kee’s only option. This is a great tale that screams with poignancy and potential truth. Though it may be Sci Fi, its human element is all too real. 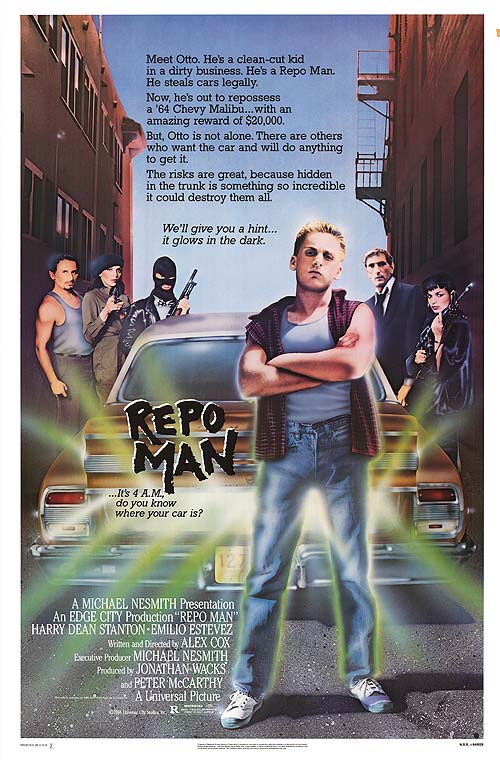 Emilio Estevez plays the titular Repo Man in this Sci Fi tale. In it, he must find and deliver a car in the trunk of which is a dead Alien. The story is simple, but it’s both hilarious and perfectly paced for a movie that kind of snuck under the radar in 1984. If that tiny blurb isn’t enough to make you rush right out and add it to your collection, check out what Roger Ebert said about it: “Most of those (other) bad movies (I saw in 1984) were so cynically constructed out of formula ideas and “commercial” ingredients that watching them was an ordeal. “Repo Man” comes out of left field, has no big stars, didn’t cost much, takes chances, dares to be unconventional, is funny, and works. There is a lesson here.” 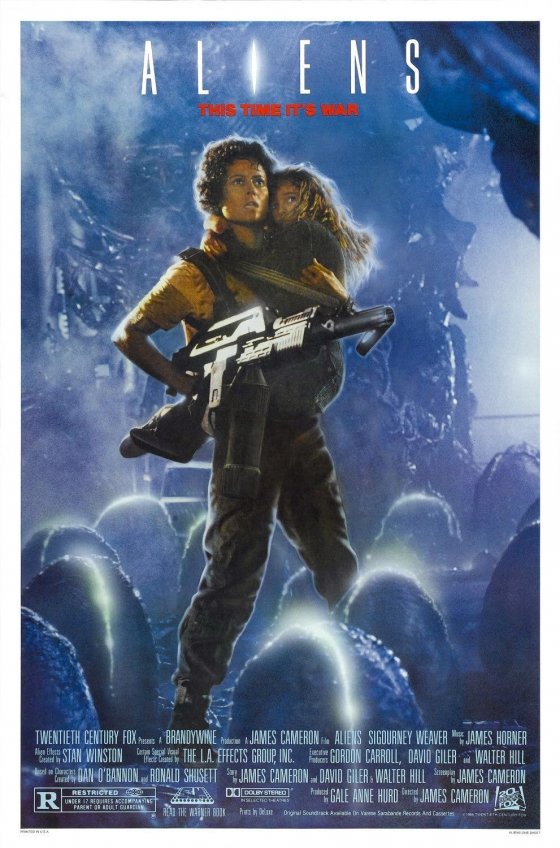 Whereas its predecessor was marketed as a Horror movie (and we’re going to keep on assuming that’s true), this sequel is a Science Fiction movie from head to toe. Picking up 57 years after the first, Elen Ripley emerges from stasis and tells the folks at Weyland-Yutani all about the atack on the Nostromo from the original. She is given a crew of Space Marines and they are dropped on the exomoon where it is being terraformed after the events of the decades-old attack. Then all galactic hell breaks loose. This could easily have been the number one movie, but sitting at three isn’t too bad.

2) The Empire Strikes Back 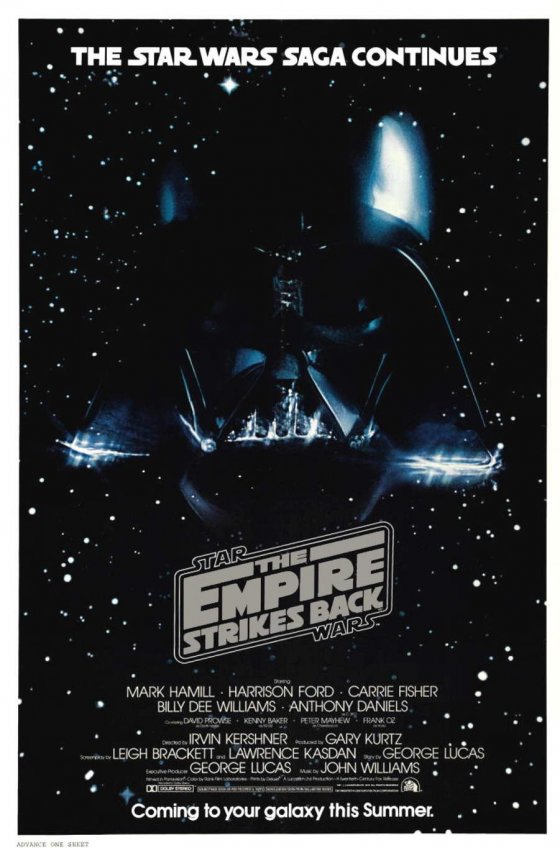 Some may refer to this as a ‘Space Opera’, and we can certainly see that. But the word there is Space, and that’s where this sequel takes place. But not just any space, oh no: it’s in a galaxy far, far away. Therefore it’s Science Fiction. Picking up three years after the events of A New Hope, the Empire is out to get Luke Skywalker for not only destroying the Death Star but also because Darth Vader has his own score to settle. Han and Chewie stick around during an attack on the Rebel Alliance and escort Princess Leia away while Han is pursued by a Bounty Hunter. There’s a lot going on, but it’s done so in such a magnificent way. Largely considered one of the finest sequels ever made. 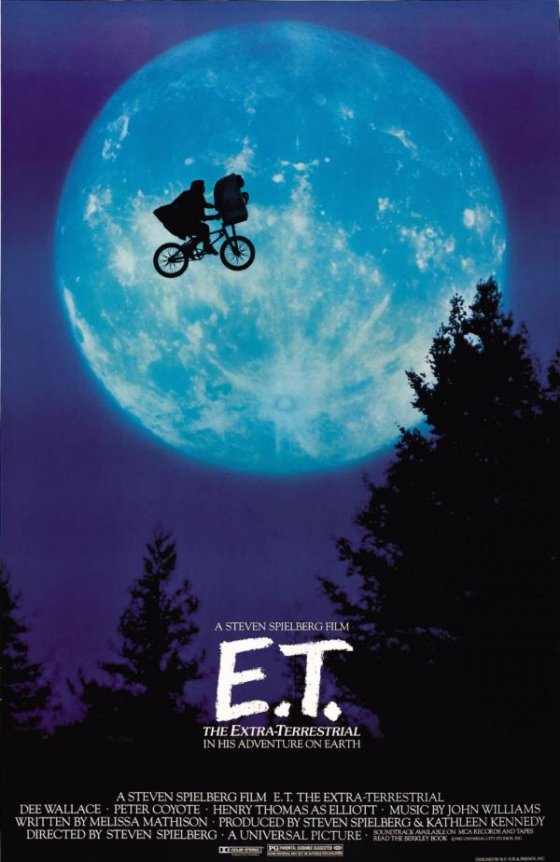 Yeah, we had to. It’s just to well done of a movie, and ironically the one movie itself that kept The Thing from being more recognized upon its initial release. The story is as simple as it is adorable and heart-wrenching: an alien finds itself stranded on Earth and the love and friendship of a little boy help save it, Seriously, that’s about it. But in this case, it’s the pure magic in which it’s done that gives this Sci Fi classic its soul. A huge hit upon its first release with glowing praise across the board, E.T. has gone on to both become one of the most well-loved movies ever, and one of cinema’s best Science Fiction flicks.