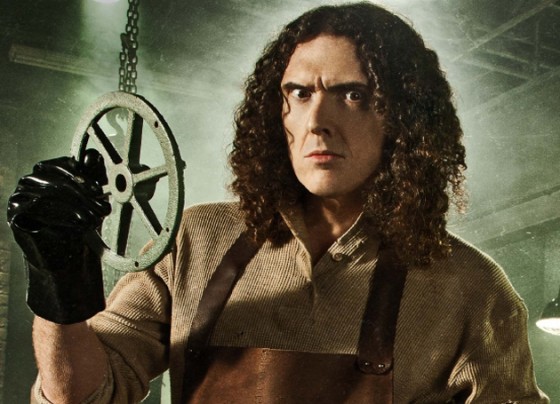 Having been a die-hard Weird Al fan since I first heard him on Dr. Demento in 1980-81, I feel I have a small bit of a right to decide which of his non-parodies get the nod for this list. Meh, maybe I’m just full of myself. Possibly both. Regardless, I do still have my ‘Close Personal Friends of Al’ membership certificate that you used to have to mail away for, so maybe that gives me some credence. Anyway, the point I’m finally getting to is Al makes other music besides the parodies he’s most known for.

In fact, Al has often been cited for having one of the most creative minds in the music industry for both his parodies and his originals. Many of his albums get praise for having slightly better new material than the songs he’s riffed. This is a good thing because it reinforces the fact that the dude is a genius — literally and musically, it seems. From his first commercially released album, Weird Al back in 1983 all the way to his newest, Alpocalyse, from 2011, Al has continued to impress with his innate ability to write great songs. Here are my favorite (and possibly his best) non-parodies of all time.

Done in the Style of: Oingo Boingo

This song features Al reminiscing about the myriad of ridiculous things the person he's singing to makes him do. I'm assuming it's a female, or I suppose it could be Scrappy Do considering how wacky Al tends to be.

Done in the Style of: Soul Asylum

Though not a parody, the song does bear a striking resemblance to Soul Asylum's "Black Gold." This is Al's second foray into wonderful and cheerful holiday music, the first being "Christmas at Ground Zero."

Done in the Style of: The Talking Heads

Not only is the song an homage to such David Byrne classics as "Once in a Lifetime" and "And She Was," but the live performances features Al in full-on Byrne regalia and mannerisms.

Though there is no direct influence on the song itself, the video is a complete riff on Extreme's "More than Words." In the song we can hear Al's soulful crooning about a deteriorating relationship that spirals into full-on masochism.

Done in the Style of: The White Stripes

From the opening guitar riff throughout this tune about some ridiculous and completely fabricated facts about Charles Nelson Riley, we can plainly hear a nearly dead-on White Stripes homage. In fact, in the actual video, Al is made up to look like Jack White.

Done in the Style of: Bob Dylan

There are an awful lot of jokes in this song in just its title alone: Bob of course refers to the fact that it's a Dylan-style tune, but it also eludes to the subject material, that of a song composed entirely of palindromes. The video is both a play on Dylan and INXS in the way that it uses signs to portray the lyrics.

Done in the Style of: Possibly death metal, maybe a bit of Phantom of the Opera, but nothing specific.

This song is an ad and review of a horror movie that doesn't actually exist but really ought to.

Done in the Style of: C.W. McCall

This is definitely one of Al's more bizarre tunes. It's unclear if the song is done through the eyes of a butch female trucker, or a transvestite male trucker, and that is most certainly only a small part of its charm.

Done in the Style of: Harry Chapin

One of Al's longest songs, "The Biggest Ball of Twine in Minnesota" takes us on a journey of a family's road trip to see one of humanity's most impressive man-made wonders.

Done in the Style of: DEVO

If Weird Al had an anthem, I would absolutely believe this song would have to be it. "Put down that chainsaw and listen to me," indeed.