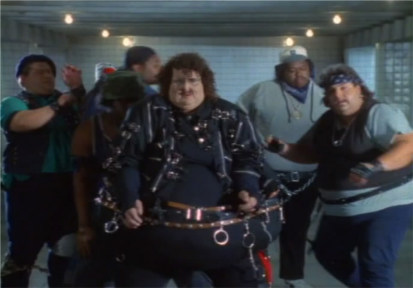 Weird Al has been around for a good long time. In fact, if you look at his album list right HERE and take a stroll down the list of parodies he’s done since 1983, when his first record and big hit came out, he’s outlasted nearly 50% of those he’s lovingly ribbed. Now if that’s not a testament to his staying power, I don’t know what is. But not all of his songs have videos -well, up until Straight Outta Lynwood and Alpocalypse, anyway. And the many that do are all exceptionally well done, often direct matches of the original artist’s videos, and hilarious. These ten videos are definitely among his best, and might just very well be the greatest representations of what the genius of Weird is capable of.

This video is an actual clip from Al’s cult classic flick, ‘UHF’ In the scene, Al basically nods off at the TV Station’s desk and begins dreaming he’s in a video which is, for all intents and purposes, a direct copy of Dire Straights’ ‘Money For Nothing’.

Weird Al Yankovic – Bedrock Anthem by laface
Though Flea from The Chili Peppers has lauded the song and video, while at the same time admitting to being a huge Al fan (this from a guy who wore pants made out of stuffed animals), no one can deny that the video is both a wonderful play on RHCP’s own sense of humor in most videos, and a great homage to The Flintstones.

Too bad the Presidents of the United States of America were kind of a flash in the pan, because their antics and persona were just ripe for future parodies (after all, Michael Jackson was ribbed twice). Anyway, the song Lump and its respective video are riffed here with Al using the entire story line of Forrest Gump.

Weird Al Yankovic – Living With A Hernia by jpdc11

Definitely one of Al’s most ambitious tunes, especially considering it used the song of an American Icon in James Brown. And it really began his tendency to really lay down a bunch of knowledge in many of his songs, including such hits as The Biggest Ball of Twine in Minnesota and Pancreas.

This song isn’t a direct parody, but much like the other songs that aren’t throughout Al’s albums, it is done in the style of a specific artist. In this case, it’s done in the vein of 50’s music such as Elvis and Doo-Wop bands. It’s also completely hilarious.

Weird Al Yankovic – This Is The Life by jpdc11

Besides his own film, ‘UHF’, Al has been commissioned to do soundtrack themes from a few other movies including ‘Spy Hard’ and ‘Johnny Dangerously’. This video, obviously from the latter, features Al living a life of opulence much akin to Michael Keaton’s Johnny in the movie. This isn’t a parody of any one song in particular, but is done in the vein of 20’s and 30’s music.

Who knew Al could rap? Well, if you’re a fan, you knew because he’s parodied both Coolio and Eminem previous to this particular song. Anyway, this song features Al being, well, most likely himself, since he is a self proclaimed nerd of sorts. In the video, in a sort of reversal of roles, Al is seen trying to get in with the cool crowd who not only shun him but seem to be genuinely afraid of him. The scene where Al receives the ‘Star Wars Holiday Special’ on VHS is classic.

Al’s newest video from his latest release, Alpocalypse, features his face superimposed on an unknown dancer’s body which more than adequately amps up the creepiness and humor factors. This song and video don’t so much poke fun at Lady GaGa, herself as they do directly point out the irritations of those on the outside who find her offensive. Clever.

Though it turned out that Coolio himself never really gave permission to Al directly to make a parody of ‘Gangsta’s Paradise’ (and therefor Stevie Wonder’s original), it was done anyway, but not in any snarky sense. In fact, according to US law, parody is protected and is legal no matter what, but Al is just a cool cat and tries very hard to get the artist’s okay. Either way, this is one of Al’s greatest videos and both makes fun of the Amish while simultaneously making you love Florence Henderson all over again.

Easily Al’s most ambitious video to date. It is a direct parody of Michael Jackson’s ‘Bad’ in both song and video. In fact, it is so alike Jackson’s that it’s almost eerie. Except for one glaring difference: Al is wearing a forty pound fat suit. It is amazing.