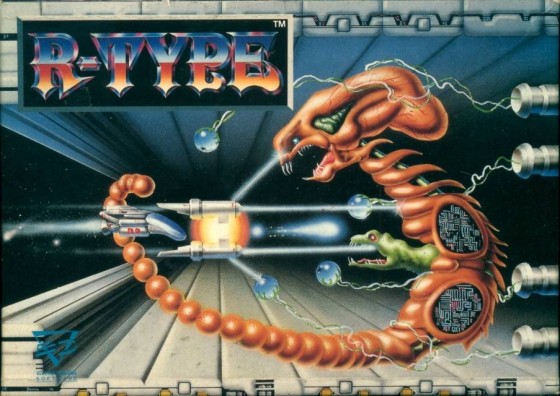 Before the home video game market turned to nothing but rehashed First Person Shooters, and long before everyone was fragging each other over the Interwebs, there were things called 8 and 16 bit graphic games featuring a vast array of ‘3D Shoot-‘Em-Ups’ where you, as a space ship of one kind or another, progressed through wave after wave of enemies blasting everything in sight. Times may have been simpler, but the games sure weren’t. In fact, I’d wager a guess that were you to take any one of these modern Video Game geeks and plop them in front of a copy of Life Force for the Nintendo, their heads would cave in like a rotted melon.

Oh sure, you can argue the merits of today’s shooters and their realistic graphics and expansive weaponry all day long, but I’ll take my Shoot ’em ups with their slightly pixelated images over what’s being offered in the home market now 100 to 1. There was just something so much more aggravating and infuriating about being bombarded on all sides by enemy ships and the incessant onslaught of lasers with nowhere to hide. Yeah: NOWHERE to hide. Well, sadly, those days are gone. And unless you’re nostalgic for the past and maybe own an 8 or 16 bit system, nothing really compares any more. So let’s take a look at ten of the greatest classic Shoot ’em ups of all time.

Landing in the tenth spot overall is Capcom’s smash hit, 1942. The story was deceptively simple: fly your Lockheed P-38 Lightning to Japan and destroy all of their planes in the process. Obviously taking place during WWII, 1942 offered a new style of play where you could not only power up your weapons, but also acquire to smaller planes to assist you all by obliterating as many planes as possible. And it was damn fun, too.

Originally imagined as a 3D version of Space Invaders, Tempest truly pushed the envelope of what many thought the limitations of video games were back in their early arcade heydays. Featuring a dizzying 3D effect were you, as a bizarre crawling claw-type ship, were looking down a jagged tube and destroying the enemies as they attempted to crawl up at you, Tempest was an amazing feat of graphic engineering. It also was one of the few to feature a dial control instead of a joystick.

If you ever played this ‘Manic Shooter’ on a home console in the 90’s, you were likely using the 1996 version for Sega Saturn. But however you remember it, you understand what is meant by ‘Manic Shooter’: incessant barrages of enemies that seem to never stop, experience points gained to level up your weapons, and the addition of smart bombs all added up to one raucous game that was a brutal as anything you’ve ever seen.

Though still falling squarely in the genre of Shoot ’em ups, Space Harrier also holds the distinction of being both a ‘Rail Shooter’ and a ‘Third-Person Shooter’, not to mention being really, really fun. Oddly, in this entry, your character isn’t actually in a ship, but is flown around via his weapon, which doubles as a rocket. You can run, you can jump, and you can obviously fly through surrealistic worlds chock-full of Prehistoric imagery blended with Oriental symbolism. It’s a trip in every sense of the word.

Imagine the rapid-paced fury of Defender, only with the added bonus of also having to control a Jeep with all the maneuverability as the vehicle in Moon Patrol. That’s right, when the Shoot ’em up was going gangbusters at the Arcade and the recent home market, some companies knew it was time for a change, and so the Silkworm Co-Op was the way to go (Also see Salamander). You could control either the Helicopter, the Jeep, or both with dangerous circumstances based on how you chose to play: specifically how each vehicle shot its weapon and when. This one was tough.

Didn’t you hate having to wait for all those Power-Ups to make your weapons fire more than just your stock guns? Well, when it came to Shoot ’em ups, that was pretty much par for the course. That was until Radiant Silvergun came around. In this game, all your advanced weapons were yours from go, and depending on which button combinations you pressed determined which weapon was fired. Sound familiar? Yeah, even though a few other button-combo games were around at the time of R.S., it was this game that lead to so many others on the home console.

If you’ve never played Defender, I’m sorry for you and you need to lay down your XBox controller in shame and embarrassment. Defender is a classic and taught all of us of the day lessons in humility, patience, and how not to put your fist through a thousand-dollar arcade cabinet. Simple over all (as the basic idea was to shoot bad guys and not let your astronauts get turned into aliens), it was frustrating at best and downright infuriating at its worst, but it was fun and it is, at the very least, a game everyone needs to experience once in their lives.

The name Gradius is a blanketing title that encompasses many, many other games that take place in the Gradius ‘universe’ including Life Force, Salamander, Scramble, and Nemesis. All of the games feature a ‘3D’ adventure aboard a specific space ship and the wanton destruction of any and everything in its path. Each also feature the standard weapons Power-Ups, later becoming a mix-and-match from a limited ‘store’ of them. But it’s always the classic that stands out for me: spending hours feeding quarters into our local arcade’s machine was a rainy day well spent.

Zaxxon was a marvel in video game development. Not only was it the first game of its ilk -believe it or not- to feature cast shadows of the ship, but it also used isometric projection to simulate three dimensions from a third-person perspective. Pretty impressive for 1982. If you remember, the game wasn’t really straight on and it wasn’t really side-scrolling which definitely lent to its excitement and game play. Though not as frenzied as some of the others, it more than made up its lack of speed in overall fun.

If you were looking for a game back in the day that could literally make you want to drop-kick your home console, R-Type was your huckleberry. As furious Shoot ’em ups go, this game is legendary in both its difficulty and its outright frustration and the level designs themselves. Though the arcade cabinet was by far the best looking (up until recent ports), the game play was infuriating regardless of how you ‘enjoyed’ it. You see, each level had a right way and a wrong way to get through, and if you chose poorly… well, I think you get the idea. R-Type is easily my favorite game on this list for both its toughness and its excitement.