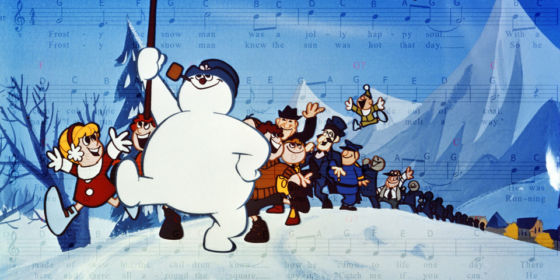 Sometimes it’s an actor or actress that makes a movie or show what it really is. Other times it’s the effects or set design. In these cases, it’s most definitely the music. These ten Christmas movies are identified not only by their content, but by the wonderful Holiday music. Whenever you hear these songs this time of year, you can’t help but think of the movie that featured the song so prominently, and in some cases made that song famous in the fire place.

George Bailey spends his entire life giving up his big dreams for the good of his town, Bedford Falls, as we see in flashback. But in the present, on Christmas Eve, he is broken and suicidal over the misplacing of an $8000 loan and the machinations of evil millionaire, Mr. Potter. His guardian angel, Clarence, falls to Earth, literally, and shows him how his town, family, and friends would turn out if he had never been born. George meant so much to so many people; should he really throw it all away? No way! Best happy ending ever featuring the well-known, “Auld Lang Sine.”

When Charlie Brown complains about the overwhelming materialism and blatant commercialism that he sees amongst everyone during the Christmas season, Lucy suggests that he become director of the school Christmas pageant. Charlie Brown accepts, but it proves to be a frustrating struggle. When an attempt to restore the proper spirit with a forlorn little fir Christmas tree fails, Linus ultimately helps Charlie Brown learn what the real meaning of Christmas is. The best song is, for certain, the humming rendition of “Hark the Herald Angels Sing.”

3. The Year Without Santa Claus – The Miser Brothers Themes

Mrs. Claus tells us about the time Santa had a bad cold and decided to take a vacation from his Christmas duties. Two of his elves, Jingle and Jangle decided to go out (with Vixen, naturally) to convince children to convince Santa that the Christmas spirit is still important to everybody. But they have to get past Heat Miser and Snow Miser before they land in Southtown, USA, where it never snows on Christmas. But the Miser Brothers can’t agree to let it snow in Southtown. But Mrs. Santa knows their mom — Mother Nature, and, well, you know. The Miser Brother’s themes are the featured tunes.

4. ‘Twas the Night Before Christmas – Even a Miracle Needs a Hand

One Christmas season, the citizens of a small town, both human and mouse, find that their letters to Santa Claus have been unceremoniously returned. Furthermore, there is a message that says the entire town has been removed from Santa’s delivery route since he’d been insulted by a letter from that town dismissing his existence. While Father Mouse confronts his cynical son, Albert, who wrote the letter; their human companions, a clockmaker and his family work to find a way to regain Mr. Claus’ favour. Albert mends his ways and ultimately ends up a reformed hero. The song, “Even a Miracle Needs a Hand” is a favorite of mine.

5. Scrooged – Put a Little Love in Your Heart

Frank Cross runs a TV station which is planning a live adaptation of Dickens’ A Christmas Carol. Frank’s childhood wasn’t an especially pleasant one, so he doesn’t really appreciate the Christmas spirit. With help from the ghosts of Christmas past, present and future, Frank realizes he must change. The end song, “Put a Little Love in your Heart,” is wonderful. (And extra awesome with Spanish dialogue!)

It’s Christmas time — Clark decided to invite all the family to have ‘the most fun-filled old-fashioned family Christmas’, which nobody shall ever forget. When the first relatives arrive, Clark soon flees to the roof to rig the lighting. The one thing the loving father wants to surprise the whole family with is the installation of a pool, which he already ordered. Unfortunately, the bonus check Clark expects any minute is overdue and tempers rise, but not only because of the check. A big event is the arrival of uninvited cousin Eddie with his family in their RV, as well as a little sledding afternoon with a new lubricant from Clark’s company, or his shifting relationship with the very hip and clean neighbors. Cousin Eddie chooses to top off all presents with his very own special creation, only intending to deliver a real reason to be jolly. The Best song has to be the theme.

When Kevin McCallister is accidentally left home alone by his family vacationing in France, he takes his house into his own hands and creates his own vacation. But his delight ends up crashing and burning when he comes into contact with two burglars, Harry and Marv, who are after his house. The best song comes from the scene where Kevin has created an elaborate fake family. “Jingle Bell Rock” never sounded so cool

Bitter and hateful, the Grinch is irritated at the thought of the nearby Who-ville having a happy time celebrating Christmas. So, disguised as Santa Claus, with his dog Max made to look like a reindeer, he raids the village to steal all the Christmas things. The village is sure to have a sad Christmas this year. Or, perhaps our villain will turn hero. The song is, of course, “You’re a Mean One, Mr. Grinch.”

A discarded silk tophat becomes the focus of a struggle between the one-time owner, a washed-up stage magician, and a group of schoolchildren after it magically brings their snowman to life. Realizing that newly-living Frosty will melt in spring unless he takes refuge in a colder climate, Frosty and Karen, and the tag-along Hocus Pocus — said magician’s mutinous rabbit — stow away on a freight train headed for the North Pole. Little do they know the magician is following them, and he wants his hat back. But even after a messy melting in a greenhouse, Santa’s magic still saves the day.

Sam the snowman tells us the story of a young red-nosed reindeer who, after being ousted from the reindeer games because his ‘beak blinks like a blinkin’ beacon’, teams up with Hermey, an elf who wants to be a dentist, and Yukon Cornelius, the peppermint prospector. They run into the Abominable Snowman and find a whole island of misfit toys. Rudolph vows to see if he can get Santa to help the toys, and he goes back to the North Pole on Christmas Eve. But Santa’s sleigh is fogged in. And as Santa looks at the beaming Rudolph, he gets a very bright idea…