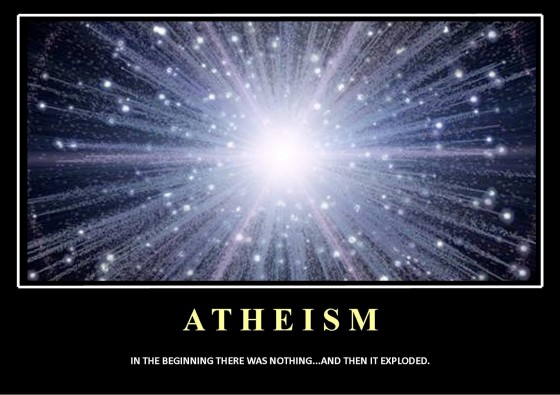 Atheism is a belief that suffers from many misconceptions and false rumors. Atheists, by definition, tend to not be organized in groups like those of traditional religions. Therefore, atheism tends to be less visible than organized religion. A number of misconceptions about atheism have arisen because of this situation. However, increasingly, atheism is receiving more publicity. After endless conversations and debates with a group of atheists for a project I did back in college, here are ten common misconceptions about atheism, but from an atheist’s point of view in many cases. 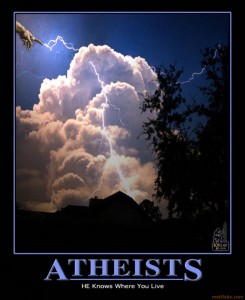 Some believe that most atheists deep down actually believe in God, (even though everyone who makes such claims often tends to also think that they believe in their particular God), but have just rejected God out of rebellion, spite, fear, or because of some childhood religious incident. In fact, there might be some hidden truth to this theory, but not with every atheist of course.

There have been some reported cases, such as with Voltaire and Freud, where the very strict and severe Christian childhood social and family environment forced them to the side of atheism. But on the other hand there are many atheists who didn’t have a bad experience at all. Conversely, they have nothing but good memories, from their grandmother taking them to church, to the sunny Sunday mornings in the park after church and so on. Maybe they simply started to question and to wonder what happened when they applied the standards of logic, reason and burden of proof of religion, as they already did with everything in their lives. And let’s not forget all the people who were never believers even from the beginning and who just never cared to believe in something sacred and superior. It can happen too.

9. Atheists think that life is meaningless 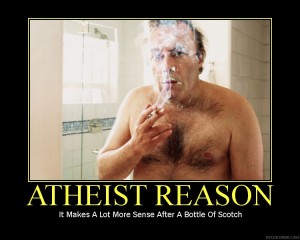 This might be true only for some desperate nihilists who find refuge with any ideology or term that dismisses life, but that’s not the case for most atheists. On the contrary, it seems like atheists, unlike most fanatic Christians or Muslims, realize how precious our life is in this world, because they usually tend to believe that it’s our only one.

So, this may come as a shock to most people who think of atheists as nihilists with no hope, but most atheists love and live their lives to the fullest. Most feel the joy of being alive and get all kind of experiences, because they don’t believe that “this is a sinful thing to do” or that “this is just a test before the real thing”. Most atheists think that they live life only once and they treat it as their most precious gift. It’s their own party – not any God’s and they usually party hard. 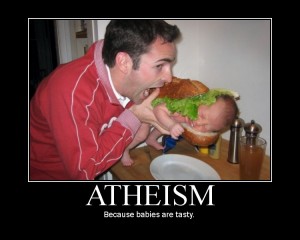 From a humanitarian’s point of view, the sad truth is that there’s a huge problem already, especially in the Western world and we would hate to even think and see more children denied the right to a family. When there are so many children out there without homes, it seems foolish to deny one of them the ability to go home, simply because their parents might happen to be gay or atheists. We need to understand that being gay or atheist might not be the ideal for our society’s standards, but at the same time it is not equal to a crime or the definition of abnormality. It might be different with what the majority tends to believe, but that doesn’t necessarily mean that it is a bad thing.

Atheists can be good, moral and caring parents who love their children very much. Of course, there are bad in every group of people and atheists are no exception. That’s not the rule for atheists, however, when it comes to parenthood.

From an atheist’s point of view, their opinion is that not only that they can be good parents, but they can make the very best ones. With all the frightened children around the world asking if they will go to hell for listening to a certain type of music, or if it’s a sin kissing or masturbating, atheists believe that the excessive brainwashing children receive from religion to believe in hell-fire, original sin, falling in love with “the wrong person,” and a merciless hateful God is nothing but child abuse: an abuse that their children will never have to experience. 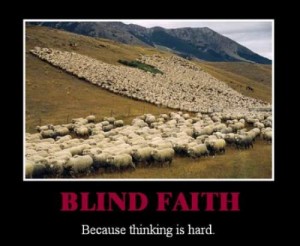 Are atheists intolerant of religion? What does it mean to be “intolerant of religion?” Does it make one intolerant for example because he will oppose the mandatory prayers of certain religions in the public schools? Is one intolerant because he will oppose the political agenda of the Christian Coalition? Some people seem to think that Atheists want to forbid religious worship, but that’s wrong. Atheists just don’t want to be harmed by it and want to feel free to decide what the best is for them and their families.

They just don’t want to be “saved”, they don’t want to get interrupted by paranoid and unexplained religious theories during science classes in college and most likely don’t want their tax money used to write their beliefs and theories in public places. And let’s keep in mind that many of those who hurl charges of intolerance at atheists are some of our culture’s most notable exemplars of intolerance. For example and despite the fundamentalists’ claims to ‘love the homosexual’, the hysterical attacks on gay people by the Religious Right from the US to Iran and from Israel to South Africa, are symptomatic of a profound, visceral hatred.

6. Atheists have no fear of repercussions 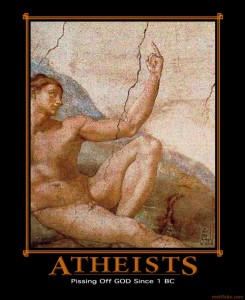 There are people out there who really believe that atheists are a true menace to society because they can do anything they want since they don’t believe in hell or afterlife. Of course this theory and misconception is easily debunked by the official statistics and crime rates that show that the vast majority of the criminals belong to the dominant religion of the society they live in. Even if that was the case and atheists were fearless of divine eternal punishment, there’s something called law enforcement and the Penitentiary system that scares all the citizens equally, regardless of their belief, race, religion and such things. 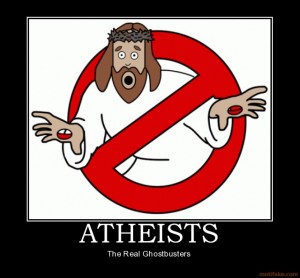 This one is particularly popular (and it seems like exclusively too) in the US, but it must be the most ridiculous one as well. Most atheists to begin with reject God which means that they automatically reject Satan as well; it would be impossible to worship something that they don’t even acknowledge its existence.

What’s interesting though is to examine this “myth” from a hardcore Atheist’s perspective that lives in a Western Christian society. If you ever get a chance to have a conversation with someone like this, you might find out that to him or her there is no bigger devil than God himself. According to them, God is misogynistic, homophobic, murderous, and cruel; all round not a very nice bloke.

But going back to the base of this argument, Atheism assumes the convincing position that there are no deities or any supernatural beings, which would include Satan or the devil. So worshiping the devil is not an option here.

4. Atheism is a religion 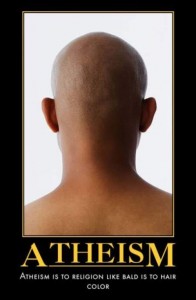 Calling atheism a religion is like calling bald a hair color. Atheism is more of an ideology regarding the lack of belief in a god or gods, nothing more. If we deconstruct the term ‘atheism’ we find ‘a – theism’ which means ‘without – theism’ which, in turn, means ‘without – belief in god or gods’. It is, therefore, not a positive belief or a claim to knowledge. Atheism is simply the lack of the belief in God.

Atheists have no holy writings, no doctrine, and worship no one. Most atheists consider unsubstantiated belief a logical fallacy equivalent to deliberate willful ignorance. Many atheists are scientists and feel like they know that objective reality exists independently of human perception and consider the notion that mental experiences are real to be absurd.

3. Most great minds are atheists 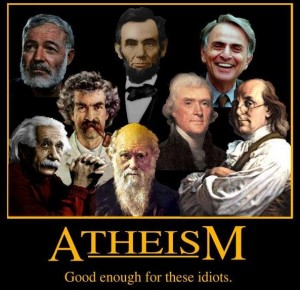 Of course there have been enough scientists, philosophers and thinkers who were true atheists but to make such a claim for the vast majority of them is just another ridiculous rumor that many religious people tend to believe. Some religious people just cannot simply accept the fact that science or philosophy can band together with religion. And it might be true that many great scientists and thinkers of the past and present have not been very religious, but that doesn’t mean that they were atheists.

In reality, most atheists are Agnostic Atheists. An agnostic atheist is atheistic because he or she does not believe in the existence of any deity and is also agnostic because he or she does not claim to have definitive knowledge that a deity does exist. On the other hand most scientists, such as Francis Collins, Isaac Newton, and James Clerk Maxwell were either very religious, or the ones who were not that religious or claimed to be “atheists” such as Voltaire and Nikos Kazantzakis, were nothing more than confused (and probably scared) people who were constantly fighting an internal battle to accept or not the existence of God and this can clearly show in the biggest part of their works and life.

2. Atheists are not scared of death 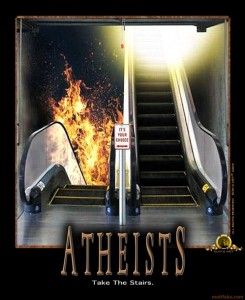 FALSE… a resounding big fat lie. Let’s be realistic, what sane human isn’t afraid of death really? Only the “unknown” part of death is enough to scare anyone. The greatest psychiatrists will assure you that even suicidal people who finally commit suicide, in reality they are terrified of death but they tend to kill themselves because of their illness, or because they didn’t want to suffer anymore, not because they were not afraid of death.

Atheists actually might be more afraid of death than people who are religious, simply because they realize that once this life ends, then there’s nothing more waiting for them. It seems like only truly religious people and especially Christians do not fear death, as they know or at least hope that something way greater is waiting for them afterlife, unlike atheists. 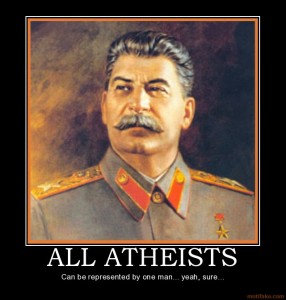 The biggest misconception is that atheists are immoral. Morality (and its origins) is probably the most heavily-debated topic between the religious and the non-religious. From an atheist’s point of view, no one could possibly be moral in the eyes of God if they do not follow the rigid manufactured, and at times malevolent and malignant doctrines and dogmas of monotheism. According to an atheist, that is the justification and the mentality of a religious person who believes in impossible things and calls them “divine mysteries.”

Ironically, most people think that having a religious leader spoon-feed morality to them and not question it is of higher morality. They also have this misconception that their religion is somehow the authorship of morality and sole authority. The existence of thriving societies before their religion refutes this easily. People tend to forget that a number of the most brutal war crimes and genocides in the history of mankind took place in the name of Islam, Christianity and so on. The same goes for some of the most scandalous sexual abuses as well.

Also some people think that atheists have no morality partially because they don’t think they know any atheists. It’s easier to hate people who you don’t associate with, isn’t it?