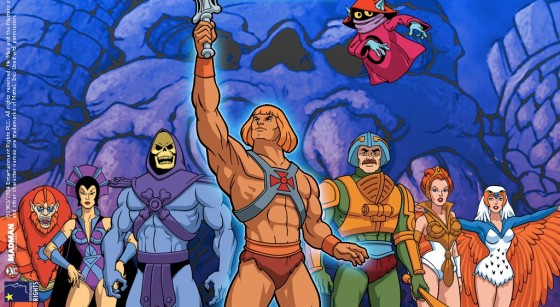 One of the most classic and iconic toy lines from the 80’s was undeniably the Masters of the Universe line. Based loosely on Conan the Barbarian and adapted for the child audience, He-Man was the shirtless, barrel-chested, bicep-packing dude all the little boys were looking for. Though he moonlighted as Prince Adam, putting up a false front to fool his parents into assuming he was a namby-pamby with a gigantic cat, He-Man merely had to ‘Hold aloft his magical sword’ and pray to the Castle Greyskull and BLAMMO! Shirt comes off, bandoliers go on, muscles go exposed. It all so damn regal! But it wasn’t He-Man that made up the majority of the problems with this toy line-turn-toon, oh no. The secondary and tertiary cast of characters were borderline ridiculous, some of them crossing that border completely. Here are ten such toys (most of which appeared in the show and animated movie) that were just plain idiotic.

Mekaneck
He Can See Almost An Inch Higher Than Other Guys!

Arriving during the second wave of figures in 1983, Mechanic… I mean Mekaneck here was one really poorly designed toy. According to the history of this extremely useful cat, He-Man called upon him whenever he was behind a pile of rocks that were just barely above his own sight line. Then, in a gleeful fit of excitement, Mekaneck would extend his neck (presumably with pulleys and levers) and get a good foot of extra visibility. And that’s all he did. It’s not like all of his limbs protruded any further (like the much cooler Extendar), just his neck. Wow, thanks mom! This toy is almost as fun as the package it came in! 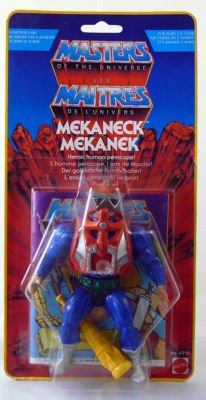 Are you kidding me with this name? No. I am not. Fisto was released in ’84 during the 3rd series of the toys and he featured all of the following cool things: a big-ass metal fist. Oh, oh… and a sword. That’s it. I guess that’s pretty cool, right? I mean not every character was imbued with a giant metal fist. Right? Oh, Jitsu. Yeah, he was more or less the same thing only he had an open hand that was metal. Same hand. Also a sword. Well at least Fisto didn’t look like switch-hitting Ginger. Oh, wait… 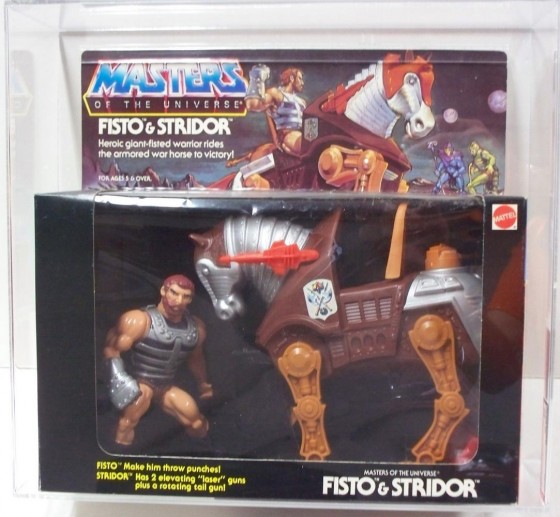 Coming out in the 4th series from 1984 was the ‘suckiest’ (get it?) character ever, Leech. I just don’t get gimmicky toys especially when it lowers the actual playability to zero. Look, I can dig the fact that he’s supposed to be some kind of lamprey-like monster who can, presumably, attach to a hero and… suck on him. I get that. But the way Leech was made, with suction cup hands, feet, and a mouth, about the only thing he was sticking to was the sliding glass door. There was no way he was going to adhere to He-Man, it just wasn’t going to happen. So what you basically have here is a Masters of the Universe window decoration. Oh so much fun. And by the way his blister pack actually says, “Evil Master of Power Suction”. So he’s like a bad guy carpet cleaner in his spare time. 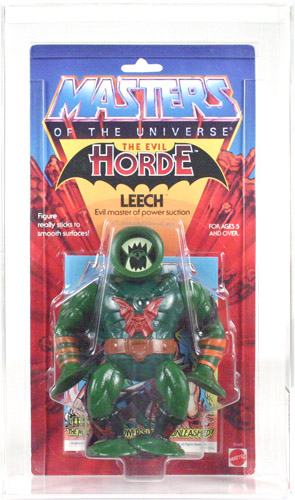 Check out the ever lamenting Leech right HERE.

Holy shit, Rio Blast, was there any character as prancy-looking as you. Well, aside from the fruity Prince Adam, but that was an elaborate ruse. I know Rio implies water (Rio means River, after all), but this GLAAD-tastic piece of plastic did not shoot water -which would have made him so, so much more awesome, by the way- oh no, he was just the ‘Fastest Draw in the Universe’. Yeah. See, so in this case, Rio is a term more or less used to make you believe he’s a Cowboy. Also he has boots on. A Cowboy… on Eternia… with Rio in his name. That’s just fantastic writing right there, fellas.

Multi-Bot is literally the Human Centipede of the MOTU character line. When you purchased your fun toy, you were immediately surprised to find that he came in pieces. Yup: arms, legs, torsos, heads -he was absolutely Cootie with weapons. Remember Cootie? It was that kid’s game that came with every bit of a cootie and you had to build him… for some reason. Yeah, well the reason for this ‘cootie’ wasn’t any clearer. Other than to make a guy with a head coming out of his ass, I suppose. Ass-Head was always welcomed at my MOTU party. 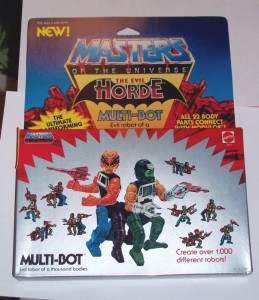 Girator/Rotar/Twistoid
These Guys Are Tops! Literally.

Remember how much fun tops were? Yeah, me neither. So you can imagine my excitement when The Master of the Universe decided to call the 1940’s and ask them what the best toy ever was on which to base their next character design. Tops was the unanimous decision. Let’s make something that all it does is spin out of control for minutes on end, and add arms. I would have loved to be in that design meeting. I would have pooped all over that idea. Literally. Oh, and sorry, I was unable to find any videos with these three losers. Even commercials. 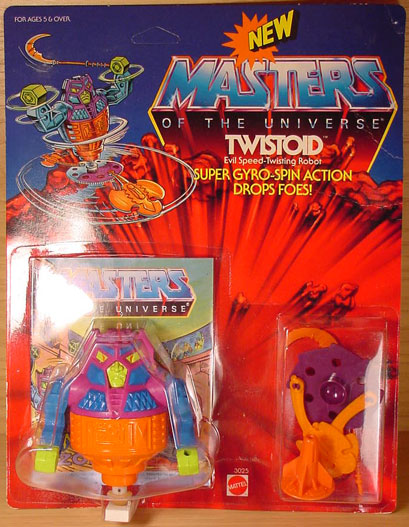 Dragstor
Like Drug Store Only With More Stomach Wheel

Since the gimmick of stupid extras seemed to work so well for Leech, it was only a matter of time before MATTEL decided one of their characters need a wheel in their chest. And not just any wheel, either. If you remember, the 80’s were rife with cars and shit that came with that zip cord you used to rev up the wheel thereby caroming said vehicle all over the damn place. Good idea in theory, except for the fact that the dude was too heavy. He never went anywhere. He especially didn’t go anywhere on carpet and with hair clogged in the wheel. Strike two, MATTEL. Strike two. 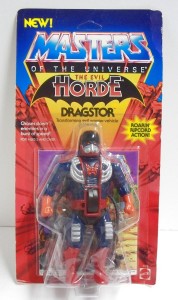 Orko
A Useless Toy For An Even More Useless Character

Where to even begin with Orko. For starters it took till series 3 to even release the poor bastard. Obviously the vote kept coming up lopsided until the day Gary from accounting was out sick. Talk about nothing fun happening with a character, this knob had it in spades. His perpetually failing brand of magic was ever so helpful in the cartoon, so when you couple that with a toy that physically can’t do magic at all… well, there’s your problem. Also he looked like black poop in a dress. 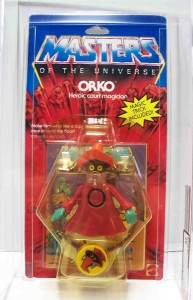 Stonedar/Rokkon
Rocks. They Turn Into Rocks.

So what’s more fun than muscled action figures with sweet weapons and bad ass vehicles? Apparently stones. Yeah, these two craggy nuggets of excitement came out in 1985 as part of the ‘Rock People to the Rescue’ story line. And no I am absolutely not making that name up. For whatever stupid-ass reason, He-Man needed assistance from a bunch of stationary chunks of earth. It’s not like he threw them at the enemy, or piled a shit load behind a trap wall. Nope, they turned into people. And back into rocks. 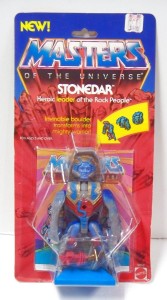 From the near get go -the second wave of figures released in 1984- we knew we were in trouble. Let’s welcome the least exciting character in the Universe masquerading as something so much cooler: Ram-Man. If you recall, when He-Man first met Ram-Man in the back room of the skeevy adult bookstore, he was a bad guy working for Skeletor. Apparently his entire lower half of his body was made out of springs and he literally jumped everywhere until he came to an obstacle he could head-butt like a door or another door. However, after much deliberation and decision making (by which I mean He-Man hugging him and telling him he was better than that), Ram-Man put aside his evil ways and joined the good side. Oh, and he was really, really slow. Typically he’d be hiding off screen somewhere petting rabbits until a door was located that He-Man just didn’t feel like smashing, then along would hop Ram-Man super excited to be a part of the team, goofing up the joint, and bashing in the door. And for some odd reason it always hurt him. Despite his metal helmet. I have no idea. 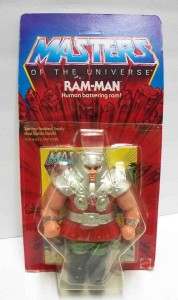