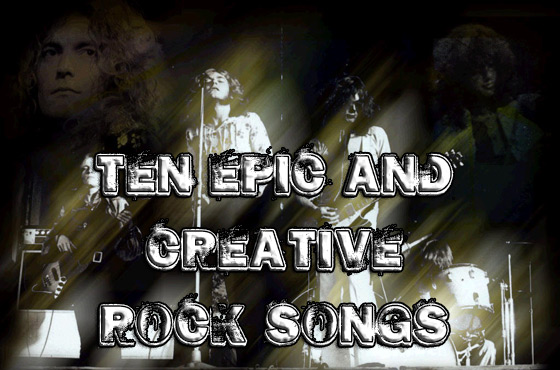 There is no shortage of criteria for making a list of epic and creative rock songs, but with several lists floating around cyberspace, many of which include songs that few have ever heard, Gunaxin figured it will take a shot at this too. An epic and creative rock song is generally long, relatively popular, and doesn’t completely follow traditional song structures. It often veers into a completely different direction once or twice while maintaining its listenability and integrity.

The orchestra in this song sounds as if it could be the soundtrack to a movie, and you won’t want to turn it off during the poetry epilogue just because the instrumentals ended.

Clocking in at 17:02, Iron Butterfly’s “In the Garden of Eden” certainly fits the criteria, but suffers from the fact that it’s not exactly the most pleasurable song to listen to in its entirety. You’ll find yourself wanting to take a break, or change the channel, and come back later after the extended solos. Regardless, Iron Butterfly went balls-out with this song, one that pretty much justified their existence. Plus, even Bart Simpson found it good enough to play a prank on the church organist by swapping in the notes to this classic.

Eric Clapton’s “Layla” is great for a two completely different reasons. It’s an extraordinarily high-energy rock song – about a girl – that also contains an instrumental good enough to be segmented out as a soundtrack to a mob movie’s death montage (Goodfellas). Another great thing? It sounds good slow, as Clapton showed during his Unplugged sessions.

This is the biggest no-brainer on this list. Fans sometimes find themselves scrambling to discover a deeper meaning behind the lyrics, only to learn it’s simply about a woman getting everything she wants without giving back, as Robert Plant says.

Here is another no-brainer, one that fans scream for — even at non-Skynyrd concerts. Like several others on this list, “Free Bird” starts out slow, remains slow, then turns into a musical Valhalla.

To think it was Wayne’s World that brought this song to the mainstream after years of cult status in Queen’s catalog of hits. Part ballad, part opera, part rock song, this song is Freddie Mercury’s masterpiece.

Generally a song about premarital teenage sexual relations isn’t one that will get elevated to epic status, but Meat Loaf’s multi-layered masterpiece paints a very vivid picture even through the ol’ baseball-to-lovemaking comparison.

This is one that often gets overlooked, just as Iron Maiden generally does when it comes to quality bands. Iron Maiden has a handful of songs that could’ve been considered for this list, including “The Clansman,” “When The Wild Wind Blows” and “Paschendale,” but it was “Mariner” that elevated these Brits from another ’80s hair metal band to poetic intellectuals. The subject matter, which is something ordinarily taught in a high school honors English class, is just the silver lining of the song structure, which is filled with both conventional rock and a poem break. It clocks in at 13:33, but does not feel that long.

Metallica’s war epic based on Dalton Trumbo’s 1939 novel Johnny Got His Gun starts off with artillery sound effects and a slow intro. Eventually we get to the part where James Hetfield screams “LANDMINE” as the bombs explode and the stage falls apart. This is a staple at all Metallica concerts.

Axl Rose and company had several major hits on their first few albums, but “November Rain” was the only one that really seemed to be more than one song. Starting off softly, “Rain” is a ballad throughout Part I. But after nearly seven minutes, Slash starts jamming and it becomes an actual Guns n’ Roses song. Chiming in at 8:57 – most of which is the slow part – this is Guns n’ Roses’s “Stairway to Heaven.”

Though it’s technically pop music (as opposed to rock), this one belongs in a category of its own.

Are there others? Of course! But before you name any, remember the criteria.