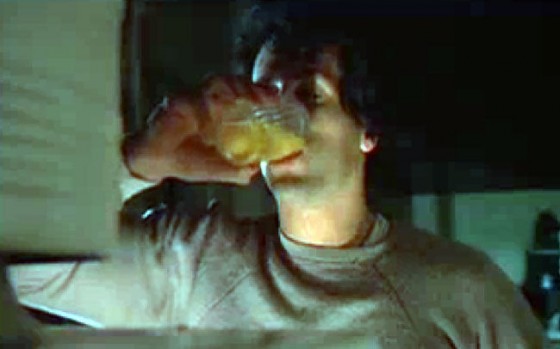 Who knew there were so many egg scenes? When I started thinking about something new I could do for Easter (mostly since after nearly five years I figured I’d written about everything) it occurred to me that there are and were quite a number of films where an egg, or eggs, makes a prominent appearance. And so, the pilgrimage began. Now there are a few here you’re sure to remember… and a few maybe not so much. Either way: EGGS! Check ’em out! Oh, and Happy Easter!

This absolutely hysterical 'yolk' (yeah, I'll get that joke out of the way right now) from Troma features rampaging fowl under the spiritual control of ancient Indians! And it's not just the food that's hard to swallow, it's also the fact that possessed human chickens are on the rampage and all Hell breaks loose! This is pure Easter family fun!

In this little slice of the Shrek film franchise, we see the swashbuckling Puss commandeer his own film with assistance from his friend... none other than Humpty Dumpty. Hey, that guy is all egg all the time!

Lo Pan versus Egg Shen. Yup. I went there.

Poor Dana Barrett. Her apartment has been occupied by the sinister, and apparently food-loving, Gozer. But before Gozer shows her the demon dogs alive and well in her fridge, he fries up a few eggs on the counter top. That's talent.

You knew you were in for a ride when the camera first pans up to see the massive Brachiosaurs and Triceratops parading through Jurassic Park. It was breathtaking. And then, we get a little more intimate when we get to watch a dino hatch! Isn't dead nature *sniff* beautiful!

This is like Breakfast at Tiffany's. Only its with actual breakfast. And it's with Pee Wee Herman. But other than that, the same.

Eddie Valliant is just about the coolest anti-hero in the world. But once he reluctantly gets the job of protecting Roger Rabbit, anyone who smarts off is gonna get... wait for it... egg on his face. Yeah, I had to use that one too.

This man is as macho as you can get! How do we know? Is it his boxing prowess? Nope. His stair-running ability? No way. He drinks RAW EGGS! Hell yeah!