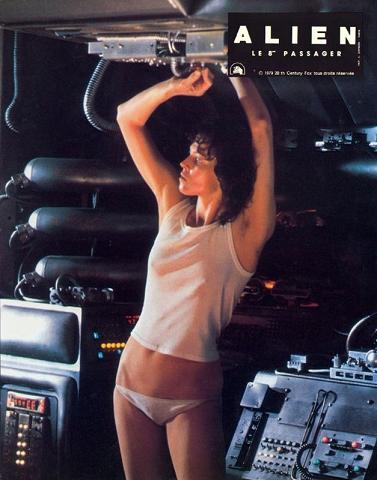 We see some movies because we hear the storyline is a tour de force and the acting is superb in every way. Some films we check out because a lot of stuff gets blown to Hell and gigantic monsters are eating cities. And still other times we watch flicks because they make us laugh like idiots. But, perhaps the greatest reason ever for sitting in front of a movie is because some chick is going to strip down to her skivvies and parade around like a model for a bunch of it and damn it, that’s what we paid for! So, here’s a tribute to ten of those times when the rest of the plot can cram it — we want T and A!

There are a few absolutely classic scenes in this ’80s masterpiece starring Anthony Michael Hall, one of them featuring his bro Chet (Bill Paxton) getting turned into a farting Jabba The Hutt-type creature at the hands of our heroine whom we see being ‘created’ in this scene. Her name was Kelly Lebrock and she was simply amazing.

Let’s face it, Shannon Elizabeth is far from the finest thespian to grace the silver screen, and that’s just fine with us. From the very moment she was left alone in Jim’s room to the final, deflating minutes as a boy fails to become a man, there was just something amazing about her. Possibly two somethings. (sorry for the shortened scene)

It’s where it all began, folks. Were it not for the impish Tina losing her life in perhaps the most God-awful way possible, Freddy’s reign of terror might never have spread the length and breadth of Elm Street. But, as we can plainly see here, our nightmarish anti-hero was never one for subtlety and was always meant to go on to bigger and better murders… hundreds of ’em.

A Nightmare on Elm Street – Blu-ray Clip: Tina by

True Lies
From Halloween to Hardening Your Wienie

Jamie Lee Curtis is a bit of an enigma. Sure, there was that flick with Travolta featuring long stretches of working out and sweat where she was pretty hot, but for the most part she’s been pretty restrained. Even as Lori Strode babysitting typically an opportunity for sexy- there was a lot to be desired. But here… oh boy. Now this is a striptease.

Alien
Is That Proper Space Attire?

Everyone loves Sigourney Weaver. Though she eventually went on to thwart an alien bitch with a badass mechanical lift, here in the first Alien flick, she’s just beginning to understand the way these freaky space monsters work. Luckily for us, she does a lot of her acting in a tiny pair of panties and quite possibly the greatest tank top in all of movie history.

Though this is an incredibly dumb movie featuring Kevin James and Adam Sandler being completely stupid coming up with a wacky scheme selling their phony homosexuality to bilk insurance money, there is a bright spot in the murk: Jessica Biel. I’m sure she’s in the movie for another purpose besides just showing off sexy undies, but I don’t care what it is.

Lost in Translation
Nuttin’ But Ass

Scarlet Johansson is a ridiculously sexy lady, and as far as I’m concerned, we should be privy to her ass in any way possible for as long as possible in every movie she makes. And with this clip from the opening credits of Lost in Translation, you can plainly see why. Very plainly see.

Kevin Smith is an under-appreciated genius. Not only is Dogma one sizable slice of allegorical perfection, but it’s also one of the funniest jabs at religion ever made. Matt Damon and Ben Affleck as fallen angels? Snape as the voice of God? Alanis Morissette as God? Wow! Oh, and perhaps the best thing Salma Hayek has ever done…

Sometimes, friends, it’s all in what you don’t see. The audience barely gets a glimpse… and that’s all it takes. This is what most people think of Marilyn Monroe when they do think of her: just a gust… just a gust.

When a full two-thirds of your movie features Christina Ricci in nothing but undies strapped to Sam Jackson’s radiator, the damn plot could be about Chop-Socky chickens from Jupiter and I’d still rub one off to it. And so would you.