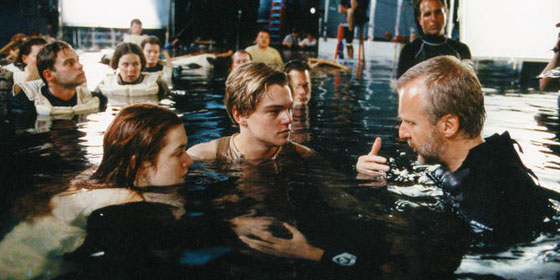 Not a day goes by that some image from a movie doesn’t flash in my mind, but I find movie sets tend to produce compelling imagery as well. They are, after all, places where fantasy or art runs into often quite mundane reality. They’re emotionally charged environments full of people of an artistic inclination (i.e., crazies,) people that professionally pretend not to be themselves, people that need megalomaniacal control over their surroundings (directors), and crowds of ambitious and frustrated people. So you’ll see small revealing moments, huge outbursts, and just plain goofiness if you know where to look. 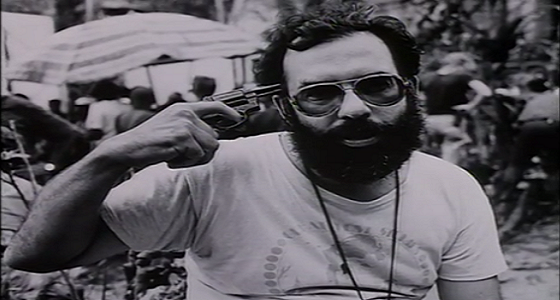 By now the shoot for Apocalypse Now is at least as famous as the film itself. Hurricanes, rebels, heart attacks, drug use, and Marlon Brando all played a big role in making the film hell for director/financier Francis Ford Coppola. This single image of him pressing a prop gun to his temple conveys that quite vividly. His wife Eleanor Coppola contends that image gets taken out of context when in fact her husband was just clowning around. Be that as it may, it’s still quite revealingly morbid that he might have found this funny and it’s really unprofessional and unsafe to put even a fake gun to your temple as even a blank firing might kill you at that range (and already have.) 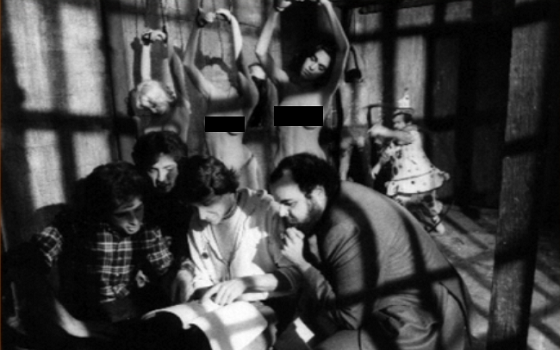 Why it’s David and Jerry Zucker along with long-time writing partner Jim Abrams on the set of their 1977 movie, the success of which made Airplane! possible. In the background, a little person mimics whipping topless women, in case you were wondering why that film experienced that success. They’re having a script meeting there in the foreground of this image while the performers in the background presumably stay in character. It’s clearly staged, but still an amusing tableau with a good contrast between the raunchy content of exploitation films and the dull office work that makes these things possible.

8) My Own Private Idaho 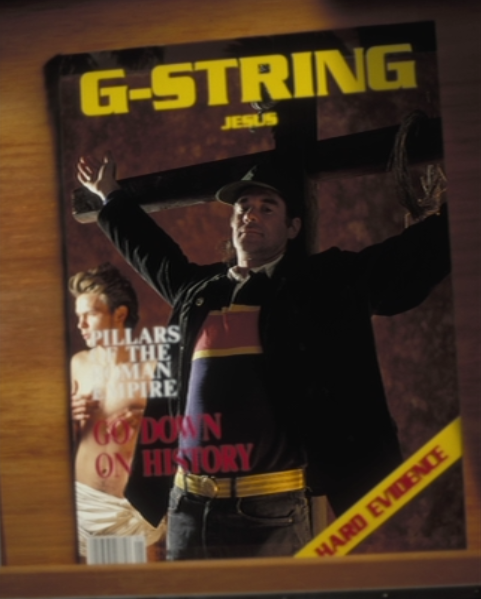 That’s director Gus Van Sant, the man that oversaw the creation of Good Will Hunting, Milk, and Finding Forrester pretending to be crucified on the cover of a mockup gay porn mag. While this might not seem like the most provocative image in these days of fare like South Park and Family Guy, this was taken back in 1991, and when stars River Phoenix and Keanu Reeves were on set. Surely tabloids would have been smacking their lips at the thought of catching such at least borderline blasphemous behavior around them (on a film that was pro-gay before it was popular, no less.) In case you’re wondering how this effect was achieved back then, it’s actually a series of mattes and letters attached to a piece of glass. 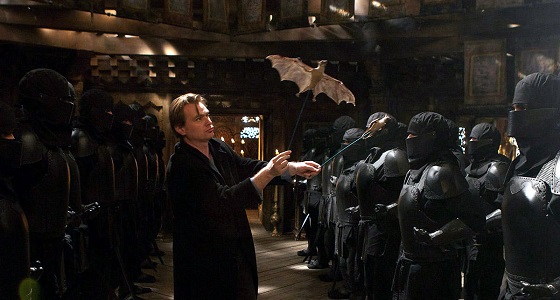 Many critics and audience members seemed to love how Christopher Nolan’s Batman trilogy took the franchise in a more serious and realistic direction than the preceding Burton/Schumacher Batman movies. Many others disliked what they thought was pretentiousness and tedium being forced on an unrealistic, infantile premise. Both groups should be able to appreciate this image of him on the set of the 2006’s Batman Begins. No matter how serious and reasonable what he’s doing is, he looks like he’s playing with toys while surrounded by assassins. If that doesn’t perfectly capture the mixture of absurdity and ambition his trilogy represented, I can’t imagine what would. 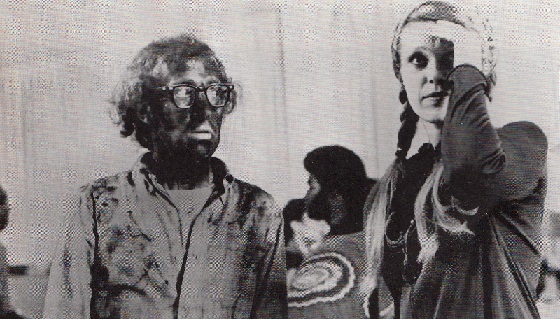 Woody Allen’s second movie as a director, Bananas is a film where Allen’s character Fielding Mellish becomes an unwitting central figure in a South American revolution. For the original ending, he gives a speech while appealing for aid in America and a Black Panther group bombs the assembly. They accept Allen as one of their own because the aftermath of the bombing leaves Mellish with a soot-covered face. Even by the standards of 1971, it surely would have seemed shockingly, stupidly vulgar. So even though Allen became such a critical darling with his precious three Oscars in 1977 for Annie Hall, remember that only six years earlier this auteur thought a joke like this would be a worthwhile note to end a comedy on. Oh, also that other thing he’s accused of doing. 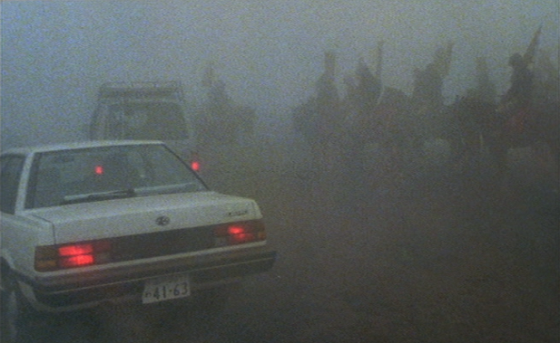 This might not look like much, but film master Akira Kurosawa saw a great beauty in it. For the documentary A.K. about his 1985 adaptation of King Lear, Kurosawa said a few words about the things he saw during the early hours of filming. While you and I probably would just at first glance see a somewhat foggy environment, Kurosawa saw great beauty in images like this and extras in costumes huddled around fire barrels. In fact he lamented that no one ever filmed that. Which just goes to show that to the kind of director who has made dozens of film classics and is admired by everyone from Quentin Tarantino to Martin Scorsese doesn’t need highfalutin works like those of William Shakespeare to see art. Just some of the underlings hanging around was enough for him. 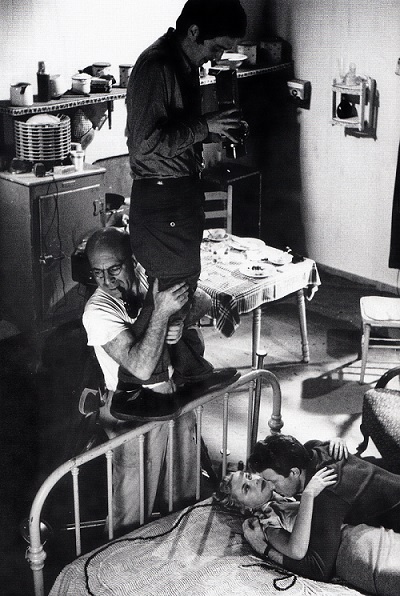 A minor classic of the film noir genre made in 1955, Killer’s Kiss is mostly of note to film fans because it was made by Stanley Kubrick. And with Kubrick being the star attraction, it stands to reason that it would be images of him instead of the film itself that would make the strongest impression. Wait, no it doesn’t… well, anyway, here’s probably the greatest photo of him during the making of process. It’s the expressions of everyone in the image that really make it. The actress doing a rehearsal for the love scene looks so bored. The crew member holding Kubrick up is uncomfortable. But Kubrick looks like he’s really enjoying himself looking down on the cast members from on high while still looking kinda silly, held up as he is. It’s the sort of image you probably didn’t see much on the set of Eyes Wide Shut. 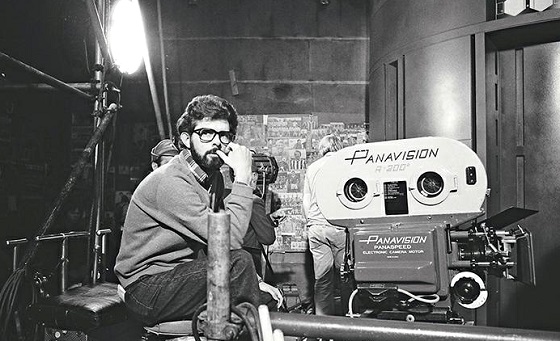 God knows that with the surprise success of this 1977 blockbuster, just about every image of its lead actors on the set while doing something out of character has been published countless times in countless books. But this image of George Lucas, whom more sci-fi fans love and hate (often at the same time) than anyone else is quite possibly the most evocative. With his apprehensive expression, business casual attire, and body language, Lucas looks like an extremely nervous and inexperienced person trying to make an impression that all’s well, which of course was the case. And the positioning of his thumb, kind of like he wants to suck it but knows not to, fits amusingly with the school of thought that Star Wars and movies of its type represented an infantile regression of mass culture.

Source: The Making of Star Wars 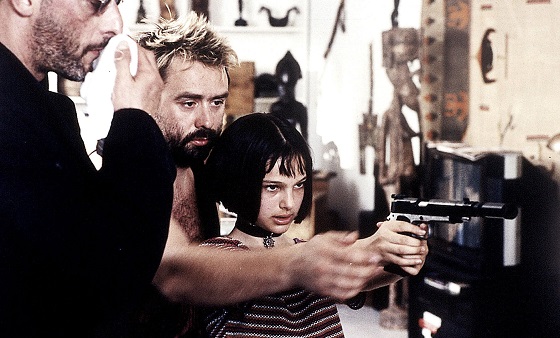 Some BTS photos give you new perspective on the dynamic between the people involved in shooting the film. They almost work as standalone art pieces. Others are fascinating because they show that even behind the scenes Natalie Portman could look totally badass even when presumably it wasn’t necessary. 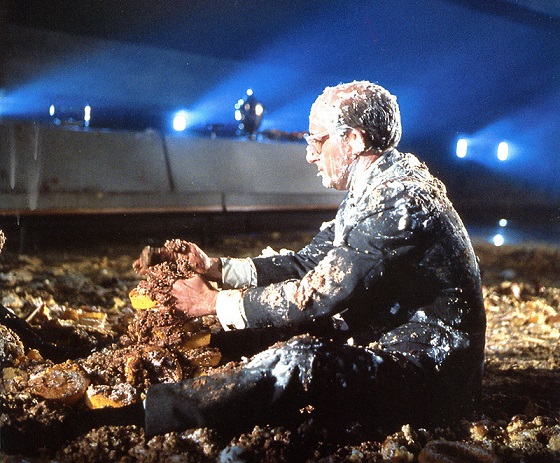 Who would have thought a photograph of a man playing with mashed creamy baked goods would be so oddly beautiful in a way that doesn’t look deliberate? The man is Peter Sellers and this is from the deleted ending of the 1963 film where the American War Room breaks down into a huge pie fight. While that ending would clash a bit with the tone of the rest of he movie versus the one released to theaters, this gorgeous silliness made all the work put into the deleted scene worthwhile.