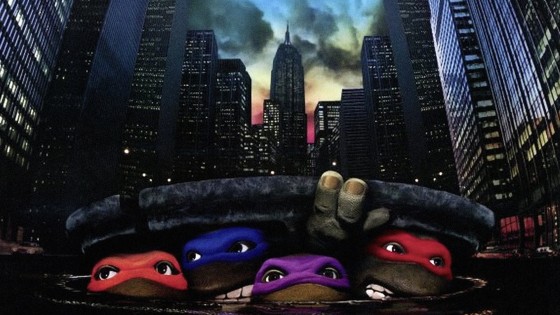 When I sat down to think about this subject, I never really imagined I’d be able to come up with even five of these things. Turns out I was wrong. Who knew so many people and creatures called the sewers their home? Sure, there are the obvious ones, which you’ll see in a minute- but there are also quite a number of things that weren’t so obvious at first. Oh, and since I did say fictional up there in the title, this list does not include any flushed pets that may or may not have grown into vulgar proportions underground. Yeah, I know that none of that can be really substantiated, so I suppose in a way it’s all fictional, but I stuck with stuff from fictional media. Alright, moving on…

10) The Phantom of the Opera 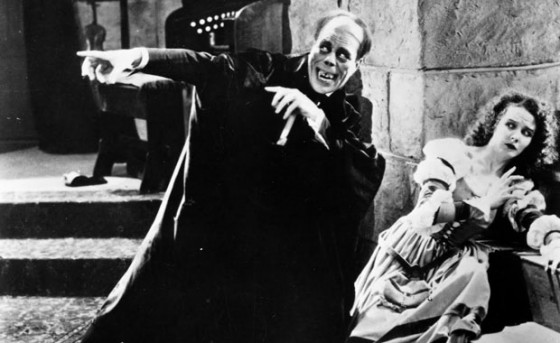 There are really two schools of people on this planet. And much like the raging debate that one can either be a Beatles fan or an Elvis fan, but not both, I find that you are either a fan of the Phantom from the Universal Horror collection, or else a fan of the Phantom musical. But never both. Yeah, well, screw that noise. Both have their merits and both include a fella named Erik who frequents the underground of the Opera House (either sewers or cellars depending on who you ask) because he’s all scary and such. 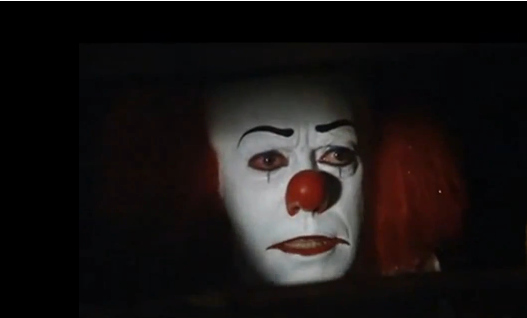 If you weren’t already scared to pissing of clowns before reading and/or watching Stephen King’s IT, you sure as shit were after. Both the noveliization and the TV movie featured a demented and demonic clown that could shape-shift into any nightmare the heroic children of the story might have had. He was a dick that way. Though with the book, your mind was left to its own devises as to just how Pennywise looked, it took the genious of the casting department to stick Tim Curry in the roll and truly give the face of clowns an evil aura from then on. Oh, and if you remember the story, we get our first really good glimpse of the clown from a storm drain/sewer grate. Nasty business.

8) The Mutants from Futurama 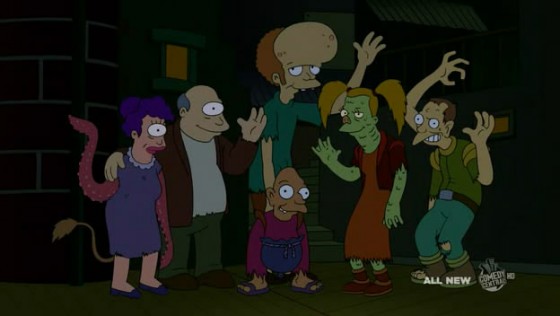 Quite possibly one of the greatest animated shows in history, Futurama featured the exploits of cryogenicall frozen delivery boy, Fry in the future century of 3000. His friend/girlfriend/sometimes wife, Lela was a cyclops who we eventually discover is also a mutant from the sewers of New New York. Below ground live all those shunned from the surface world; mutants with various deformities and, well, lack of specific body parts and addition of other such parts. This is also where Lela’s parents live and from where she was given up for adoption as a baby. It’s really a lot less sappy than I’m making it sound. 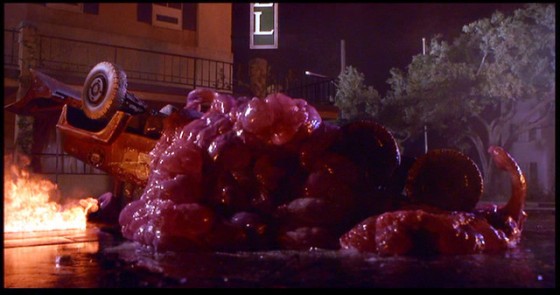 Okay, so I’m taking a bit of a liberty with this one since, realistically, the Blob didn’t really live or hang out in the sewers, but it certainly used them a lot for transportation purposes. In the 1988 remake of the original, this becomes even more apparent as we see the blob popping out of drains and sinks as it searches for its next victims. A good portion of the action takes place down there where the heroes attempt to stop it before it can devour even more of the town. It’s later stopped, but not before making even more of a mess above ground..

This particular group of sewer dwellers comes from Marvel Comics and played a key roll in a story featuring The X-Men’s Storm. In the pages of Uncanny X-Men 169 we get our first glimpse of the subterranean team of mutants known as the Morlocks. Led by Callisto, Storm confronts the Morlock’s commander and wins in battle and shows them that they can live in harmony with the mutants in the surface world. Later, during the Mutant Massacre conducted by Mr. Sinister, nearly all of the Morlocks are destroyed. 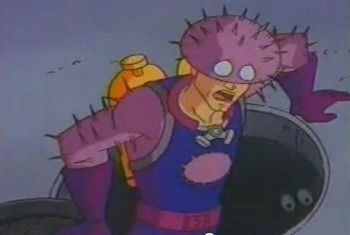 If you aren’t a fan of The Tick in any of its iterations (though specifically here the animated version) then there might be something wrong with you. But I will assume you are since we’re all cool here, and point out the fact that Sewer Urchin is a character from said mythos. He is the sworn protector of the sewers, and is in fact a bit like Aquaman in that respect, even going so far as to have certain powers like his ocean-going comic book cousin. But it’s worth noting that he sounds a lot like Rain Man when he talks outside of the sewer. It is revealed in The Tick Versus Filth that Urchin is far more refined and cool while in his underground home. Oh, and his hat is a purple urchin Because why wouldn’t it be. 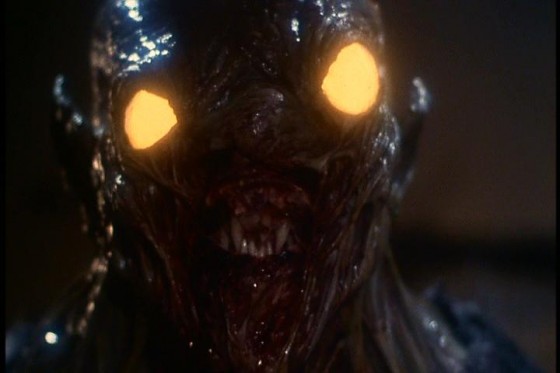 Something is eating all the homeless people and the population has dwindled so much that whatever is doing it has expanded its hunting ground to the city’s population. This isn’t good. So the rest of this 1984 horror flick features a group of cops and kids trying to convince each other of the best way in which to deal with this issue. No, not the lack of homeless people, but the up-rise in hideous monsters attacking everyone else. Is it a good horror movie? Meh. Does it feature horrors rising from the sewers? Yep. Well it’s good enough for me then. 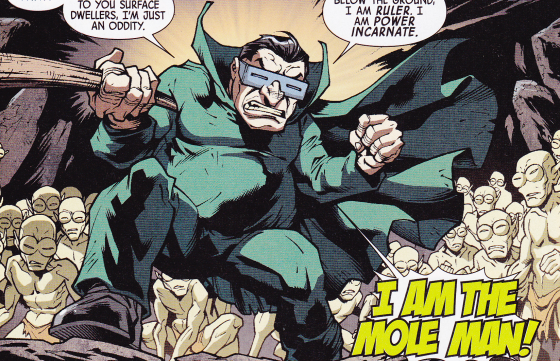 Not to be confused with hapless perpetual victim, Hans Moleman from The Simpsons, Mole Man is a treacherous villain from the Marvel Comics universe. They do look strikingly similar, though. Hm… anyway, I digress: Mole Man doesn’t so much live in the sewers themselves as he does use them occasionally to put his nefarious plans into action. He actually calls Subterranea his home and was one ruler of the Moloids. He has been thwarted a time or two by the like of The Fantastic Four and The Avengers. He is currently… um, underground. Probably. 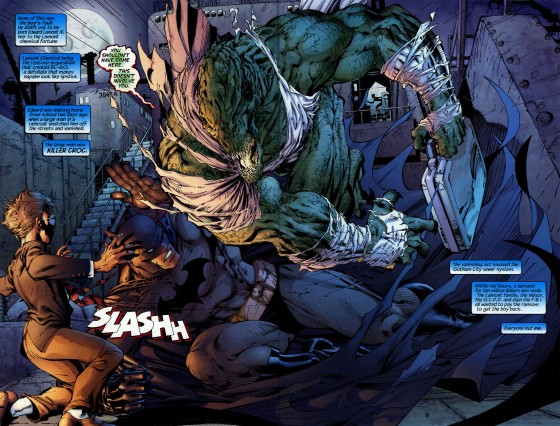 The DC Comics Batman villain known as Killer Croc has gone through myriad changes over the years, ranging from a trench-coated thug vying for power, to a literal reptilian monster who is as far from human as you can get, despite the fact that he walks on two legs. Whichever way you fancy your snarling, flesh-eating baddie, chances are he lives in and around the sewers. He is typically ugly and shunned, which is of course part of his reasons for hiding underground, but the sewers work for hiding purposes as well. Also I bet he smells really bad. 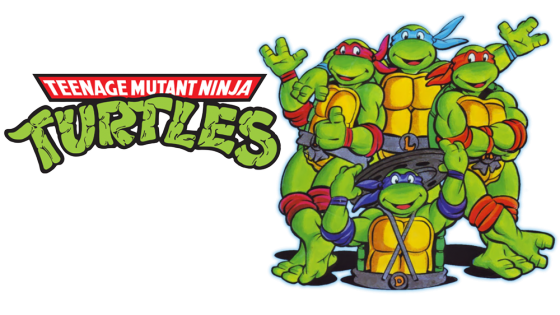 Was there really any other choice? This comic-turned-kids’ show-turned-movie-turned-kid’s show again has been around for a long time, and every incarnation has put its own little spin on the teen turtles. Beginning as a black and white, decidedly PG-13 comic book from Eastman and Laird, the mutants known as Leonardo, Raphael, Michaelangelo, and Donatello quickly gained in popularity once they became the subject of a pretty goofy animated toon and then an even goofier live action series of movies featuring Corey Feldman and Vanilla Ice. Seriously. Lately the tone has darkened a bit with the release of the animated movie a few years ago and the resurgence of the series that is a bit more faithful to the source. However, there is a new movie coming out, in case you hadn’t heard, and it’s all Michael Bay all damn day. Yikes. Apparently the turtles are from space this time? The fuck? Yeah, passing on that.